The last time I saw Paris, the French Aerial Army flew its fighter jets over my head and its Ground Army drove its “umpteen” ton tanks down the Champ-Élysées, the majestic Arc de Triomphe silhouetted in the background.

It was the 200th anniversary of the French Revolution and demanded something monumental. Then-President François Mitterrand provided. It was very impressive in a “Red Square May Day” kind of way displaying all the accoutrements or war. In the opinions of most Parisians, he overdid it. It was Bastille Day, 1989, and the two-hour long parade went down in history as the most expensive (some estimates of $300 million) show of pomp and excess since Louis XVI went to the guillotine.

Along with my horror of tank tracks tearing to shreds the famed Champ-Élysées, the unprecedented security included rooftop snipers, sirens, dignitaries behind bulletproof screens, fences, and guards everywhere. Even a blimp kept a suspicious eye on the city from above. So much patriotism on display but surprisingly few national flags in the hands of spectators and I heard that every self-respecting Parisian that could had managed to leave town for the day.

I hear the evening extravaganza was even more déclassé. My friends and I chose to walk the quiet banks of the Seine. From the Pont au Change, we watched the spectacular fireworks over the Eiffel Tower.

“Something Old – Something New” 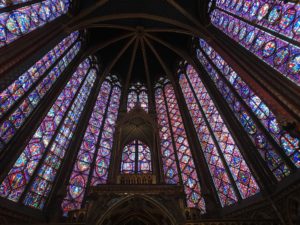 My memories of previous explorations of Paris can probably be filed under the “something old” column. My multiple visits in the 1970’s are best described as ancient history. So much water has flowed under the bridges of the Seine.

But there are favorite places, and at this stage of life, what I observed decades ago deserves another look.  So I suppose the “old” has become “new” and de rigueur in 2018.

I stand upon the ground of the Île de la Cité, facing the Cathedral of Notre-Dame, knowing that at my back is the lofty and incomparable Sainte-Chapelle and beneath my feet are the archeological ruins of the medieval origins of this city in approximately 52 BCE. All road distances in France are calculated from here, Point zéro des routes de France.

A Gallo-Roman town (Lutetia) developed on the left bank of the Seine during the reign of Augustus (27 BC to 14 AD); the Cité was occupied by the Gaulish tribe referred to as the Parisii. The Middle Ages witnessed growth focused around the Cathedral of Notre-Dame, whose construction began in 1163. Since medieval times, Paris has continued to expand.

Begun in 1160, the church suffered desecration during the French Revolution when much of its religious imagery was damaged or destroyed. Soon after the publication of Victor Hugo’s novel The Hunchback of Notre Dame in 1831, interest in the building revived. Centuries of soot and grime have been removed in the past decade or so, and much of its original color and beauty have been restored.

Inside the cathedral are spectacular columns, rose windows and a lofty ribbed ceiling. But never visit just the interior. Surrounding gardens afford views of this massive structure and my favorite point of architecture, the amazing flying buttresses of Notre Dame.

Also, just across the street from the rear gardens is the Deportation Martyrs Memorial. The somber memorial is dedicated to the memory of the more than 200,000 people who were deported from Vichy France to Nazi concentration camps.

Another recent campaign of cleaning has restored Sainte-Chapelle to all its glorious color and beauty. Entering into the lower chapel, I enjoy the beautiful ribbed, star-studded royal blue ceilings. But climbing the staircase brings me to the real pièce de résistance of this royal chapel. Commissioned by King Louis IX to house his collection of Passion relics, including Christ’s Crown of Thorns, the Gothic-style chapel was consecrated in 1248.

Standing beneath the starry ceiling, I am surrounded by 15 soaring stained glass windows. It is a challenge to discern any framework supporting this sea of glass. One giant rose window dominates the western wall. The windows illustrate stories from both the Old and New Testaments, embellished with a little idealistic nods to the king and queen in appreciation of their royal support. Louie prayed in style!

Sainte-Chapelle, like most of the royal buildings, wasn’t treated kindly during the French Revolution, but thankfully it was restored and has been a national historic monument since 1862. 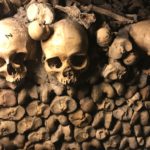 For a “below decks” look at old Paris, I head to Denfert-Rochereau Ossuary, better known as Les Catacombes. Having visited the Paris Sewers in the past, I take a look at even deeper remains of early Parisians.

Living life on an island is great for property values but limits space. The earliest cemeteries of Paris filled to maximum, back in the “good ole days” when plague, marshy pestilence, and reigns of terror created a backlog of bodies. Burial became a health concern and one of the worst offenders, I am told, was Holy Innocents’. This church cemetery was used through the Middle Ages and was the largest in Paris, often used for mass graves. The church was destroyed in 1787 and the cemetery closed and replaced by a herb and vegetable market! Which was a good thing as the cemetery was about 300 yards from my hotel room. This proximity to the original Les Halles Market would be a little off-putting to the multitudes of revellers who currently invigorate its cafes and shops.

Public burial pits, overflowing with corpses, were no longer an option. What to do with the remains of all those ancestors? Like the ossuaries and catacombs of Rome, Malta, Brno and others, the Parisians went underground. Deeply underground.

Over six million dead were moved and filed away in a network of subterranean tunnels that account for over 200 miles of passages. Row upon row of skeletal remains – skulls, fibulas, ribs and humerus are arranged in caverns and walkways of these catacombs. One can’t distinguish between the common citizen and the famous, but revolutionaries Marat and Robespierre are among the throngs.

Just a fraction of the tunnels are open to visitors. The entrance sign which warns “Stop! This is the empire of death” hasn’t deterred many from descending some 300 feet below the streets of Paris. I have heard podcasters speak of sneaking into these tunnels at night for exploration (and those of the sewers). And in 2004, police discovered a cinema and cafe set up inside one of the passages. So Parisian!

And yes, I bought tickets online before I arrived in Paris. These were a bit more costly but the line upon arrival was very long. Visitors are limited to 200 per entry time and I doubt I could have entered had I not bought the tickets ahead. 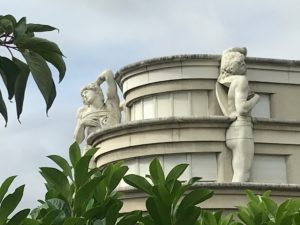 “The Dying Slave” – Art Deco atop the police station

Definitely the Coulée Verte René-Dumont, better known as the Promenade Plantée, is new to me. After the hoards of the Les Halles neighborhood, I relish my new experience of strolling along a 3-mile green belt in the middle of Paris.

The Promenade plantée follows the obsolete infrastructure of the 1859 Vincennes railway line. We enter using the stairs on the west end just behind Opéra Bastille. The parkway rises 32 feet to form the Viaduc des Arts, below which expensive arts and crafts shops are tucked into the arches of the former elevated railway viaduct. Strolling eastward, the parkway intersects numerous gardens, provides open views of Paris and the neighborhoods, and passes through enclosed sections between modern buildings. My favorite architecture was the Art-Deco Police Station with its dozen gigantic rooftop statues of Michelangelo’s “The Dying Slave.”

The plantée was the first green space constructed on an elevated train viaduct. But, if it sounds familiar, it is because New York’s High Line and Chicago’s Bloomingdale Trail offer similar experiences.

Though having visited the neighborhood of Montmartre in the past, taking an informative Walking Tour of the area with a local is an entirely new experience affording me a way to see a part of this neighborhood not glimpsed when visiting the famed Sacré-Cœur Basilica via the typical tourist route. The iconic church sits atop the highest hill of the city, commanding a pretty nice view of Paris. 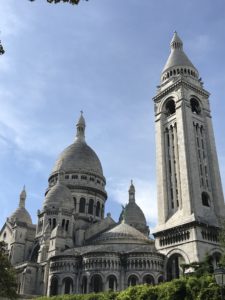 We approach the iconic landmark via quiet streets, through famed areas haunted by the presence of past Impressionist icons, rock legends, and modern street artists. Our views range from historic windmills (not the trashy red windmill of the Moulin Rouge that no self-respecting Parisian would attend), neighborhood street art and vineyards. From the quiet, deserted  Square Marcel Bleustein Blanchet the views of the Basilica are spectacular.

We learn that Sacré-Cœur is a double monument, political and cultural, announced on 4 September 1870, the day of the proclamation of the Third Republic. In a speech by a local Bishop, he attributed the defeat of French troops during the Franco-Prussian War to a divine punishment after “a century of moral decline” since the French Revolution. A rather imprudent assertion in Paris’ most rebellious socialist/artist neighborhood.

Construction of the Sacré-Cœur began in 1882 but the basilica wasn’t consecrated until after the end of World War I in 1919. Dedicated in honor of the 58,000 who lost their lives during the 1870 war, financial support came from parishes throughout France. A law of public utility was passed to seize land at the summit of Montmartre. Not a particularly wise decision considering the overall “I love Anarchy” attitude that continues to exist today.

Passionate debates concerning the basilica were raised as early as 1880, when the basilica was called “an incessant provocation to civil war” and the basilica’s existence was hotly debated. Construction costs, estimated at 7 million French francs, drawn from private donations, were quickly spent before the first pillar was posted.

Pilgrimage donations became the mainstay of funding; donations were encouraged allowing donors to “purchase” individual columns or maybe a brick, but as in most grandiose ideas, it fell on the taxpayer and the state who suffered the ultimate responsibility for funding. Debate and hard feelings continue to this day. A recent ballot in Montmartre was signed by at least 500 residents petitioning to demolish the Basilica altogether.

Circling the Basilica, all Hell breaks loose! Is every tourist and pickpocket in Paris on the steps of Sacré-Cœur? It appears so. A quick look inside the interior, some appreciation for the vaulted ceilings and icons, another quick view of panoramic Paris, and we escape the maddening crowds for saner regions. Perhaps those 500 locals had a point. 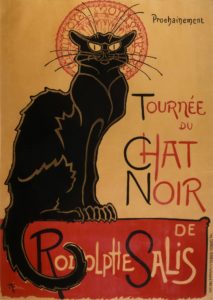 We walk downhill to the neighborhood of Pigalle to 84 Boulevard Rochechouart and Le Chat Nior, “The Black Cat”. The name originates with the bustling nightclub/artist salon that opened near here in 1881. Le Chat Noir is thought to be the first modern cabaret of Paris. It’s probably better known today because of the Steinlen poster art which hangs on my wall at home. We enjoyed a good lunch where all self-respecting lovers of a black cat should dine.

On all previous visits, I located on the Left Bank in the neighborhood of Saint-Michel. For something new, I chose the Right Bank and the cozy Hôtel du Cygne, just a five-minute walk from the metro and RER at Châtelet – Les Halles. It is ideally located within minutes of many historic sites, shops (including a huge LEGO store where you can buy a kit for the Millennium Falcon for under 800 Euro), pedestrian areas, and a plethora of bars and cafes. There was never a shortage of reasonable beers, plates of escargot, crepes and ice creams. What more could one want?

Something old, something new: then what in Paris will be borrowed and what will be blue?