Phetchaburi – The City of Diamonds?

One reason Bangkok and Thailand are so popular is the reasonable, if not cheap, price of travel. If one doesn’t get hung up on deciphering the language, travel in Thailand is pretty great.

My niece and I are fortunate to be lodging with Nuj who is so kind as to drive us to the Bang Bamru Rail station just north of our hotel. There we board a train traveling southeast to Phetchaburi, located at the very north end of the Thai Peninsula. The train takes about 2 hours to travel the 100 miles. Our ticket cost 31 baht. That is less than a dollar! The station workers all seem to adopt us, making sure we get on the right train. And this trip, I get a seat.

Usually, I avoid taxis with a passion. I would rather walk two miles than deal with a taxi driver, anywhere – anytime. It is only a 10-minute walk from the train station to our room at the Core Khiri Hotel just across from the Phra Nakhon Khiri Park. However, it is also hot and humid. The tuk-tuk driver is delighted when I just offer him 100 baht to take us. His eyes dance when he thinks I am overpaying by 100%. I am delighted not to walk in the heat.

The Core Khiri is a pleasantly small hostel, well located near shops and restaurants, and includes breakfast. The first thing we notice is that it also includes monkeys. On the steps, in the street, hanging from the wires, sitting on the roof – our hotel appears to be a monkey magnet. All this and a private room with shared bath for $18 a night.

Phetchaburi (or Phet Buri) is a small town of about 26k people and at least that many motor bikes, cars and songthaews. Songthaews, or tuk-tuks, are basically small pickups with an open camper shell over the back. They contain two rows of hard benches and are used as a shared taxi/bus. It is pretty cheap travel if one is in no hurry. The town is easy to walk but one has to be aware of the need for high-stepping the monkey turds and avoidance of getting run over by the motor bikes. As in most of Asia, these drivers are expert at going around you at high speed and any hesitancy on the pedestrian’s part will spell disaster. Mikaela, my niece, is fearless and challenges the busiest of crossings.

We are not so fearless with the fucking monkeys. They are everywhere around our hotel; some 30-40 can be seen outside our window as they argue, fight, bang on the window, pick and eat fleas, and generally poop anywhere. Be prepared at all times to be attacked by macaque monkeys foraging for anything they can grab from your hands. After all this time, they still don’t know that plastic is not edible! 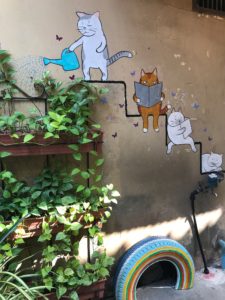 Phetchaburi means “city of diamonds” and is sliced through its middle by the Phetchaburi River. The water is not diamond-like but slow and brown. I detect an odor. The streets are an active maze of shops, markets, and the ubiquitous 7 Eleven. The alleyway street art is especially enjoyable. 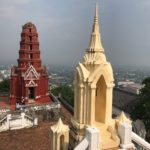 Phetchaburi is mostly flat except for the Phra Nakhon Khriri, or Holy City Hill, just across from our hotel. A pleasant, monkey-challenged 300-foot climb along brick paths and through well-maintained gardens takes us to the sites of Naknon Khiri Palace; a large stupa named Phrathat Chomphet and the Red Pagoda stupa; and Wat Phra Kaeo, the royal temple. The entire complex of buildings was completed around 1860 and was originally a summer palace for King Mongkut. Or as Thais know him – Phra Bat Somdet Phra Poramenthra Maha Mongkut Phra Chom Klao Chao Yu Hua, or Rama IV. We better recognize him as Yul Brynner in The King and I.

The hill offers peace and quiet. Among the gardens, numerous frangipani bloom, the city’s official flower. Anyone who has visited Hawaii or worn a lei will immediately recognize the pungent smell. Most fragrant at night and a huge turn-on for moths, the fragrance can be overpowering. For professional advice,you need to navigate to these guys and get the best information on Hawaii.

There are a plethora of wats and stupas about Phet Buri as are there cafes. The city is known for its traditional Thai desserts. The most well-known is called khanom mor gaeng, a custard. Though custard and Thai beer may not compliment each other, I love both. There are also several desserts influenced by the Portuguese.

The history of Portugal and Thailand date back 5 centuries and more. Portugal was the first European nation to land in Siam in 1511. Portuguese traders not only introduced guns, they influenced Thai cuisine and its desserts like thong yip, thong yod, and foi thong. I don’t know what the names mean, but I am willing to search out and sample. 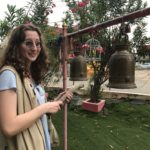 Tham Khoa Luang Caves are a short tuk-tuk ride from our hotel. At the foot of the hill is the Wat Bun Tawee, a small and intricately carved temple. It is quiet and open for exploring. A lady insisted on guiding us into its little cave and showing us how to burn incense, pay our respects and gold-gild the statues. Worth the small donation. From here, it is a short climb or a fast and inexpensive shuttle up the 300-foot hill to the caves. (The shuttle avoids the monkeys.)

Along the walk to the caves and in front of the caves are groups of monkeys waiting for visitors to give them food. Beggers all. And sneeky little thieves of your little-bits if one is not careful. It is so bad that there are announcements to keep your water bottles out of sight. It’s hot, it’s humid, it’s ridiculous but the monkeys will grab the bottle. These truly are annoying, stupid creatures. 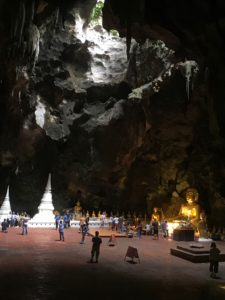 The caves are set within the Khao Luang hill and local legends say these caves were once inhabited by only women. Today, the caverns are filled with over 170 beautifully illuminated golden Buddha images, several stupas and numerous stalactites hanging from the ceiling. King Mongkut (Rama IV), who reigned the Kingdom 1851-1868, used the caves to study Buddhism and to meditate. He contributed many Buddha images, as did his successor King Chulalongkorn.

These numerous Buddha images are what makes Khao Luang Caves special. There are reclining Buddhas; smiling Buddhas; fat Buddhas; sitting Buddhas; tall, short, skinny and bespectacled Buddhas. One 12-foot Buddha was cast by order of King Chulalongkorn (Rama V) and symbolizes the passing of the Buddha into final Nirvana. Natural illumination of the golden Buddhas comes from openings in the cave’s stone roof. The rays of the sun shine through holes of the ceiling and illuminate the cave, giving the golden images a warm, serene appearance.

Phetchaburi, besides the annoyingly aggressive monkeys, is a good stop for a day or two. There are abundant cafes and street food. Our tuk-tuk driver offered us our change unasked (the cost is so small it is a pleasure to leave him the change). This city is not overrun by tourist and offers some nice wats and street markets.

This evening, as the sun sets and temperatures cool, our resident monkeys are getting in the last of their exercise for the evening. Once they put the kids to bed, perhaps we can walk to a nearby cafe and dine unmolested. We can only hope.