There is no guarantee that someone will like travel.

When I moved to California 50 years ago, I had never been west of Des Moines. I had no idea what to expect other than it was my decision and my new job. So, if it was a bad decision, I could just move back? Probably it would have not been that easy.

When I first traveled in 1972, some 84 countries and seven continents ago, I had no clue what to expect. I had never traveled out of the country, let alone on my own. In both cases, I made the right decisions for myself and have never regretted the adventures. 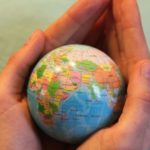 Last Christmas, I gave my niece, Mikaela, the gift of travel. “Anywhere you want to go,” I said to this novice, 15-year-old potential tourist. I was hoping for something easy, familiar, comfortable. She chose Thailand. Thailand? Are you sure? Yes, she was and thus, Christmas of 2018 we traveled to Thailand. It was full of surprises for the both of us.

I have learned never to underestimate today’s youth. They are so much more aware, capable, and adventurous than I at that age that it is truly scary. I look back at myself at 16 and “Ugh! Facepalm”. No way would I pack up a bag, get on a plane for 27 hours and fly to a foreign country. It took me another 12 years to do any such thing. Needless to say, I was worried taking my 16-year-old Minnesota native half way around the world.

Seventeen days later, I learned I worried too much. My niece proved resilient, observant and fearless. Discussing our adventures in Thailand, we pretty much agreed on some “bests and worsts” of travel in that country:

BEST STOP: Bangkok. We both developed an appreciation for this crowded, active city. It was easy to maneuver, offered lots to do, and the people were wonderful. On Blogs that I follow, the people of Thailand are most often cited as the friendliest people in the world. We have to agree.  The people made this city very special.

BEST SIGHTS: We both loved the Demons found at the Royal Palace. Impressive, colorful statues abound but the Demons are especially good. Overall, the Royal Palace and its stupas and architecture are spectacular. I think we can add as a close second the wonderful sunset over the Chao Phraya River while watching the gobbling fish in Nonthaburi, upriver from Bangkok. We would have missed a great experience had we not ridden the Orange Line boat north and explored this area. 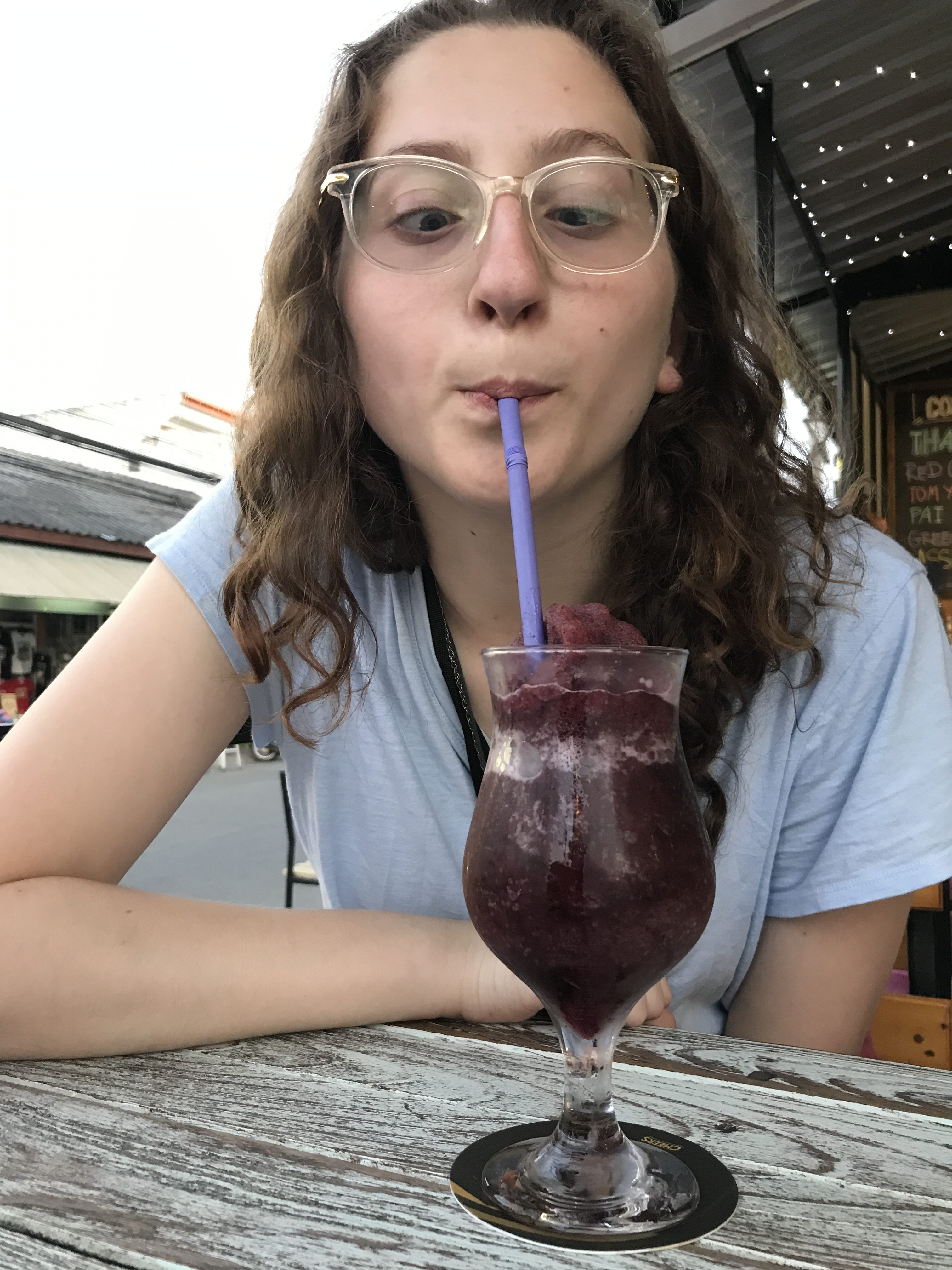 BEST FOOD OR DINNER: This is a hard decision as Mikaela was willing to try new foods. We mostly ate at the open street cafes where one had to point at the dish desired. We loved the Pad Thai but as is typical, these meals were hits and misses, some much better than others. Mikaela loved the Bangkok cooking class and its preparation of traditional foods. Breakfasts at our lodgings was usually very good.  In general, our lunches and dinners were good. And I was constantly shocked at how cheap it was. We could eat well, add a beer and smoothie, for about $5.

BEST ACCOMMODATION: When planning travel, I would choose 3-4 hotels and send Mikaela the links. She would choose the one that she liked most. She did a great job in choosing.

Mikaela loved the Panida Suite Hotel in Bangkok because “the people were so nice.” And they were. I could not have chosen a better hotel or experience to introduce Mikaela to Thailand and travel in general. Our hosts, Nuj and Jane, went out of their way to be of service to us. I also loved the Siam Guesthouse in Kanchanaburi as it was very comfortable and in a wonderful location to the action. 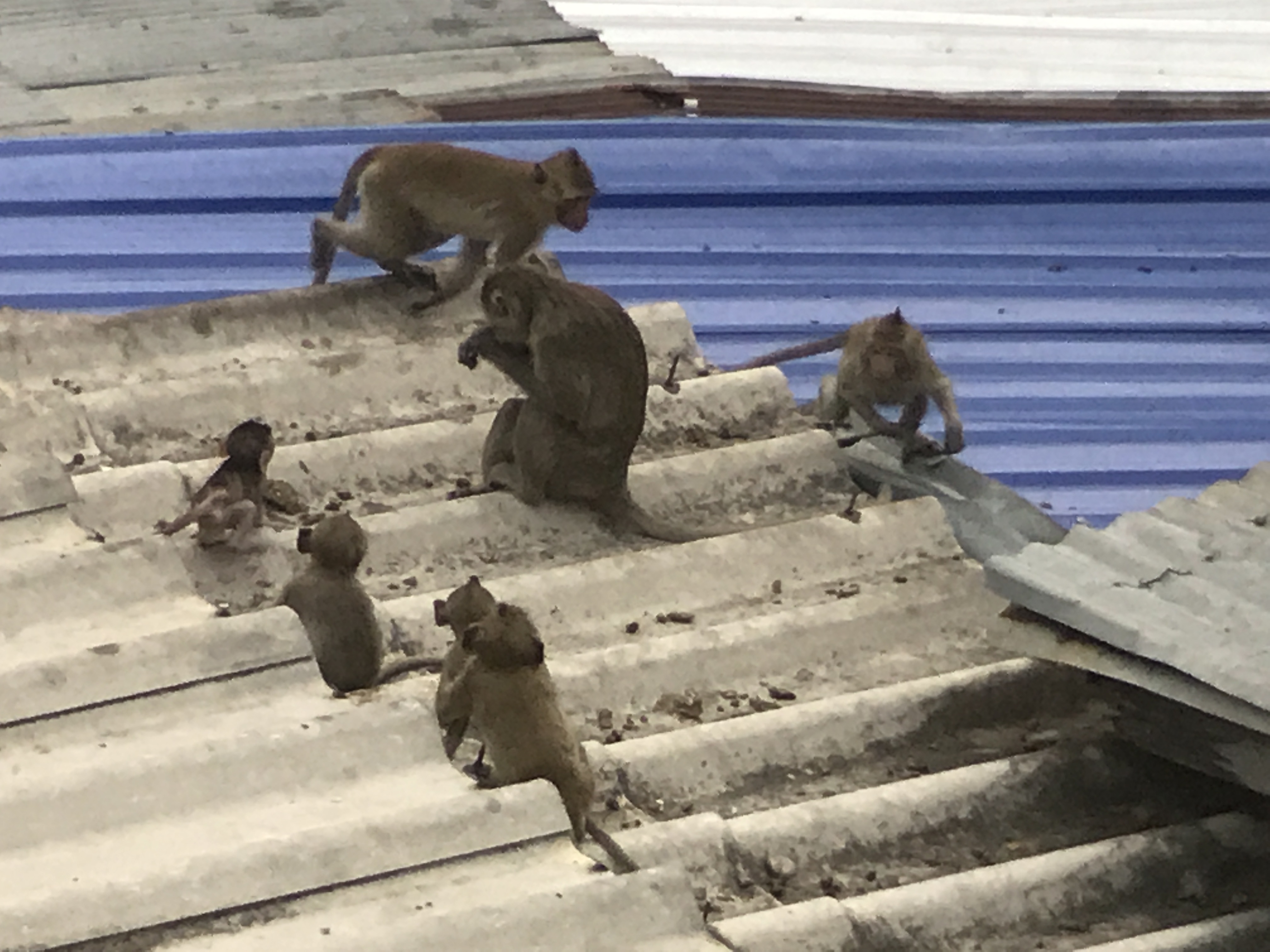 NOT as cute as they look

WORST ACCOMMODATION: We would both agree it was the hostel in Phetchaburi. The room and location were okay. What ruined it for us were the plethora of aggressive, nasty monkeys that hung out all over and around the building.

WORST RIPOFF: Hands down for Mikaela was The Sanctuary of Truth in Pattaya Beach – so much hype, so little follow through. For me, it was Pattaya in general. The beach and hotel were okay but walking in the city or trying to find something nice to do is like browsing the worst carnival one can find. As a traveler, I usually prefer something a little more cultural than Ripley’s Believe It Or Not or Magical Ice of Siam. Just sayin’.

MOST UNUSUAL: For me, Googling in Thailand was different. The searches would come up dated using the Thai (BE) calendar (based upon the year that Buddha died). So instead of 2018, the date would reflect 2561 BE. This tells me again that just like Santa, Google is watching everything I do.

BIGGEST UNEXPECTED SURPRISE: For me, it was that I liked Bangkok so much. Having visited there in January 2015, I left unimpressed by its smog, traffic and crowds. This experience changed my mind.

Mikaela? “How fucking boring Phetchaburi is.” Well, I have to agree that the monkeys added adventure to an otherwise rather limited city. Three days were two days too many. Live and learn. Mikaela also observed “how nice people were, how helpful, nicer than Northern Minnesota people.” I think that is praise indeed!

I agree about the Thai people, and unfortunately Phetchaburi too. What I learned concerned the difference in experiences when traveling with a group and when traveling solo. I seldom take the opportunity to return to a city where I have traveled when with a tour. Bangkok was an exception. I discovered that my experiences interacting with people differ greatly when I am on my own, and this was especially felt traveling Thailand. I compared my two experiences and found that the group experience tainted my reactions to the country and its people. Solo travel allowed us more intimate contact and exposure to the culture. I left Thailand with an entirely new appreciation and love for the country, its food and people.

One continued drawback? The heat and humidity were awful. We escaped Minnesota’s freezing weather for that of Thailand’s 90-degree temperatures and almost as high humidity. Both of us just gave up battling puffy, curly hair and deeply appreciated the air-conditioning. 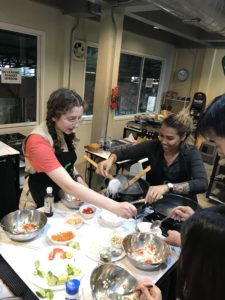 AND IN THESE POLITICAL TIMES: I usually turn on TVs to see what American shows are carried. Most times it is the worst we have to offer. We did enjoy Thai Top Chef even though we couldn’t understand a word but laughed when judges spit the food out. Not so funny when chefs were to cook with bugs and what looked like rat. We will never know who the top chef was. However, a disappointment was that once out of Bangkok, the main US news program was Fox. BBC balances the programing a bit but seeing Fox and Friends made me want to gag.

NICEST PERSON: This is a hard decision. There is no way I can read the signs or pronounce most of the words. I so appreciate the people who were willing to go out of their way to assist. The woman who got out of the ticket line to assist us in finding the right skyway ramp could have just ignored us. The smiles met on the street and the markets were genuine. However, Mikaela and I both agree the nicest person was our Bangkok host Nuj, and his entire family. When he said “I am just here to serve you” he meant it. Not only did they fix us a dinner late at night because close by cafes were closed, he drove us to the train station on two occasions. I owe him a debt of gratitude for making Mikaela’s initiation into travel so wonderful. Yet, it was Nuj who presented us with the parting gifts!

MIKAELA RECOMMENDATIONS NOT TO MISS IF IN THE AREA:

WHAT TO DO DIFFERENTLY: “I lost my headphones” probably on the plane over. (Actually, this is a minor glitch. The most important things, her iPhone, cables, money, Passport and Arrival Visa remained intact. Headphones can cheaply be replaced.) A second opinion is spending less time in cities outside Bangkok, and I would agree. We traveled a bit slower for Mikaela’s first trip and this was a travel and learn experience. We could have fit in another city.

IMPORTANT DISCOVERY ABOUT YOURSELF: Mikaela felt “I can do this and manage my anxiety” about the unknown, travel, just being out of her comfort zone. Thailand was a tough first exposure for travel – I think she managed incredibly well.

WHERE NEXT: “Indonesia.” Well, neither of us know a thing about Indonesia so we need to review our lessons from this travel experience, crack open those books and delve into this future adventure. 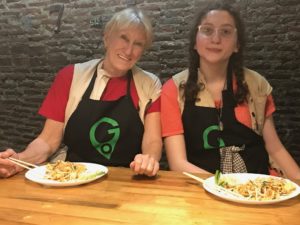 OBSERVATIONS: Mikaela is good with directions, a must when traveling solo. She is fearless in traffic, a must for Asia where pedestrian crosswalks are few and motorbikes numerous. When Mikaela said she wanted “different” I was a little apprehensive that the Thailand might be a little too different.  I need not have worried. She is a good, adventurous eater.  She was excellent at spotting good places to eat. Like me, I don’t think bugs are ever going to be on her menu, but she is open to trying new foods. And most important for a traveler, Mikaela is aware of her surroundings and others. She was aware of her valuables and kept her little bits secure.

Thailand proved to be a wonderful choice for travel. There is no guarantee that someone will like traveling. But, I think Mikaela liked it.