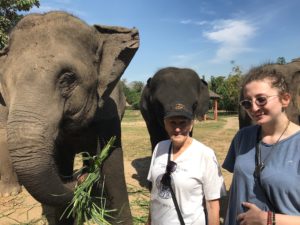 Today we stock up on little ripe bananas and drive out to visit the Big Guys and Gals of the Thai jungles.

Eco-friendly tourism is popular. Recognizing the impact that travel and tourism has on the environment, more groups are becoming ecofriendly both with the environment and the creatures struggling to live within it. Tourism can love an environment to death. So too with its animals. As an individual I may not be able to eliminate cruel practices, but I can make efforts to support more humane treatment of animals. Today, it is the elephant of Thailand who captures our attention. 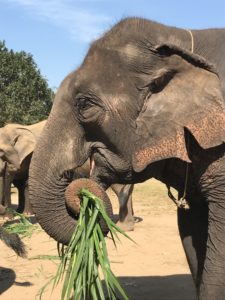 There are two species of elephant in the world: African and Asian. The Asian elephant has four sub-species, one of which is the Indian elephant, the centuries-old icon of Thailand. Yet, they are an endangered species. While there is estimated to be 3,500 captive elephants left, experts believe less than 1000 wild elephants remain in Thailand. In spite of the fact that the elephant is Thailand’s national animal and appears on unofficial flags, its population is in rapid decline due to loss of habitat and continued poaching.

Thai elephants are unique as they are smaller, have shorter front legs, and a thicker body than their Indian cousins. Known for their strength, intelligence and individual personalities, elephants and Thai royals have “enjoyed’ a centuries-old relationship. Since Alexander the Great, elephants have been used as warm-blooded ‘tanks’ in war, for logging, and as beasts of burden carrying tourist on their backs. In other words, elephants have consistently gotten a bad deal when dealing with humans.

Whether used for war, heavy labor or transport, elephants needed to be trained. That is when the mahout appeared. The mahout is a male who starts very young as a trainer and keeper of an elephant. Both mahout and elephant are expected to bond for life. The baby elephant knows no other life but the young man who feeds, controls, and trains her. The most common tools used by mahouts are chains and the bull hook, a sharp metal hook used to stab about the head and in sensitive areas like the mouth and inner ear. Literally, elephants are beaten, caged, and starved into submission.

Thailand used to be over 90% forested, ideal living conditions for these wide-ranging, hungry foragers. Each elephant requires at least 38 square miles to forage for sufficient food. Most elephants earned their keep in the logging industry and transporting of goods. But, unregulated commercialism, time and greed took its toll. Illegal logging and agriculture dramatically reduced forest cover. Once logging was made illegal, mahouts needed to find other methods of feeding their elephants. That is when ‘entertainment’ and tourism seemed to be the answer. 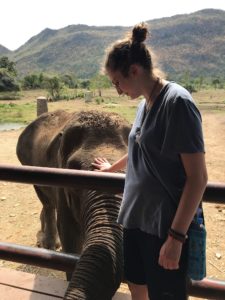 Thailand is a Buddhist country and elephants have a special symbolism as a sacred animal. Efforts were made to protect the animal starting in 1921 when King Rama VI decreed all wild elephants government property. In 1939, they were classified as beasts of burden, like horses and oxen. Unfortunately, this allowed domesticated elephants to be claimed as private property. In 1992 a law was passed to protect wild elephants but at the same time the law excluded the beast of burden. Not until 2010 were any laws passed that would protect the domesticated elephant.

Human-elephant confrontations are increasing in Thailand. Dangerous elephants do exist. During the last decade, 45 humans have been killed by wild elephants. Conflicts are most intense in the area where I now stand, Kanchanaburi. Besides electric fencing (verses the thick hide of an elephant), efforts to keep elephants at bay have included tree barriers, burning tires, firecrackers, and chili-infused fences. These don’t sound effective against a hungry, angry elephant.

I don’t agree with a total boycott of the elephant experience any more than I ever believed we could just “Free Willy.” Such extreme measures ignore the bigger problem of taking care of the domestic elephants that rely on humans to be nurtured and protected. Elephants have strong bonds with each other and with their mahouts. One cannot ignore this symbiotic relationship when finding solutions for their humane treatment. 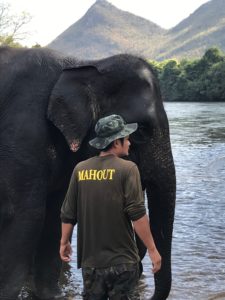 After the 1986 ban on logging, over 70% of the domesticated elephants were unemployed so mahouts and their elephants joined the tourist industry to become part of trekking camps and street begging. Elephants kicked soccer balls around, painted pictures, stood on their hind legs, or lifted objects and people to entertain tourist. A sad state of affairs for this noble, intelligent and sacred symbol. But the elephant, like the mahout, needs to eat.

As a disclosure, I have ridden elephants on a couple of occasions. It is an awesome experience. However, as I become more conscious of the issues surrounding the training and history if these animals, I realize ecotourism is the right direction in which to move when protecting those animals which depend upon humans for survival and care. The nervous pacing, swinging and twitching of the elephant anchored by a large chain around its leg should hint at the anxiety and boredom of the animal. The sharp bull hook the mahout carries, gentle tapping or not, should indicate that it is a condition of control and threat more that love and devotion. No animal chooses to be ripped from their mother (often shot in order to get the baby away), squeezed into a small cage, beaten and prodded, and psychologically terriorized and tramatized in order to modify their behavior.

Ecotourism appears to be the answer. A combination of conservation, protection, promotion and maintenance of cultural heritage. Organizations promoting ecotourism generate revenue by letting people experience elephants within a natural state and an elephant-friendly experience.

Just 25 miles north of downtown Kanchanaburi is one of the new sanctuary sites for elephants. Elephants World is dedicated to animal rescue and providing sanctuary for these giants. Here we have an opportunity to experience an up close and personal relationship with several of their 25 elephants. Most are females ranging in age from 88 to 8. Each has its own personality and experiences. 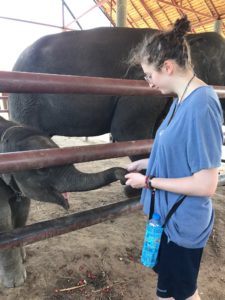 Thus, we bring our meager offerings of ripe bananas. Elephants are herbivores who love ripe bananas, leaves, bamboo, tree bark, and other fruits. Eating occupies 18 hours of an elephant’s day. A male elephant eats over 4.8% of his body weight each day, and because he may weigh over 4.5 tons, he can consume 440 pounds of vegetation. The female, weighing in at a meager 6600 pounds, eats an even higher percentage. That is a lot of bananas and leaves! Because elephants can digest only about 40% of their food intake, the result is a daily dung heap of 130 pounds. (Elephants won’t eat in unclean surroundings fouled by dung, which means a lot of shoveling and cleaning.)

I am beginning to understand what my fellow ecotourist will be doing for the day! 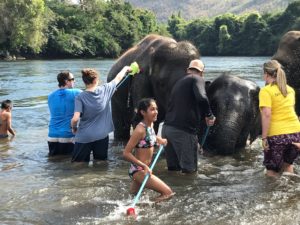 While at Elephants World, we not only help prepare food but feed the elephants. Pounds of grass must be cut daily, sticky rice balls with vitamins created and fed, vegetables and fruit washed, and bananas prepared. Much food is donated to the compound but it must be washed to insure it is free of pesticides.

There are also two young babies, both under a year old, who are excited to see us. Rambunctious and clumsy, they eagerly seek attention and rubs. Wagging, grasping little trunks reach out for our little bits. Mothers keep a watchful eye. 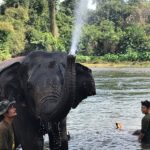 However, the pièce de résistance of our day is the bathing of these giants. The compound is located along the River Kwai and in the afternoon, the elephants lumber to the river for their bath. Mikaela, pail and brush in hand, joins the elephants, wading and splashing in the cooling waters. Deep rumbles of contentment echo over the river. The elephants clearly appreciate the scrubbing away of their day’s mud and worries.