Bucharest Is Not Budapest!

I enjoy traveling independently. The planning of my trip is as enjoyable as the actual travel. Both are learning experiences. However, there are destinations where it is more difficult to maneuver as a solo female traveler; exploring the countryside of some countries necessitates a different approach. Thus, for the remainder of my trip, I join an organized tour which will move me around rural Romania. From now forward, I am at the mercy of another’s planning: their choice of hotels, restaurants, and sites of interest, their time schedules. Our group is small, just eight bladders.

The tour is spending little quality time in Bucharest. A three hour walking tour is never enough and experience tells me these tours enter few places if there is a fee. This is why I always come into a city before a tour. I would be so disappointed about the many sites we zip past, ignore, or never enter. As I follow our city tour leader, I fully appreciate my last few days of freedom spent roaming Bucharest. 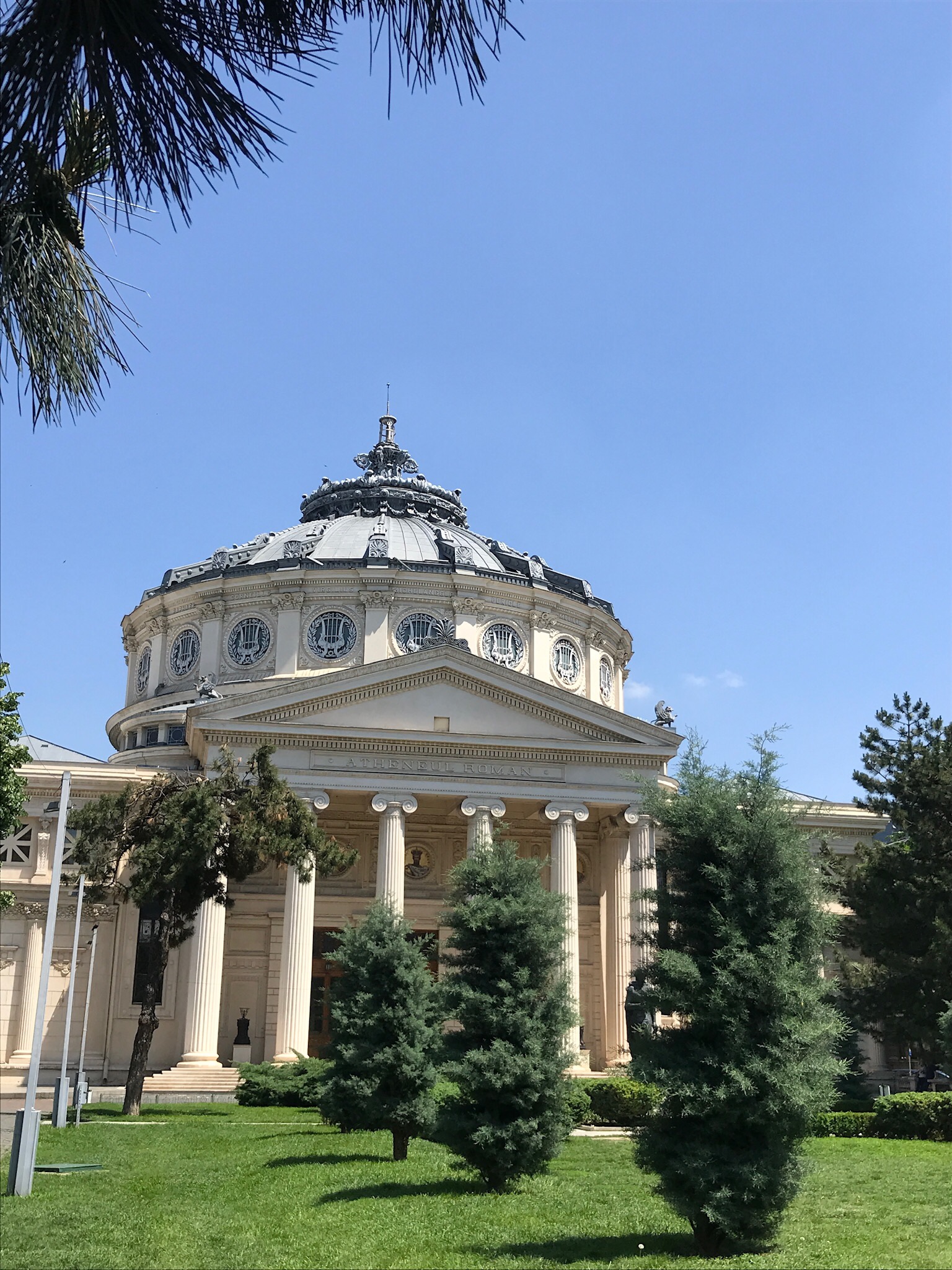 We walk the historic streets of Old Town and learn bits of history. Our first stop is the Romanian Athenaeum, a wonderful neoclassic building. I am told its interior is gorgeous. The concert hall opened in 1888; today its beautifully frescoed circular walls and ornate domed ceiling is the home of the Philharmonic Orchestra. An 800 sq. ft. wall painting depicts important events of Romanian history, starting with the conquest by Roman emperor Trajan up to the establishment of Romania in 1918.

One can’t miss the eclectic mix of architecture along the streets of Bucharest. And many buildings are under renovation. When the communist took over after World War Two, everything changed for Bucharest. Churches were closed or destroyed, the orthodoxy had to go underground to survive. The communists also nationalized the elite’s homes and businesses and the banks. By 1989, when the communists were thrown out, many previous property owners were gone or dead. For those owners who have reclaimed their property, along with churches and schools, it is a time of renovation, if they have the money to do so. Therefore, as one walks the streets, there are dilapidated buildings next to beautiful renovations. Chipping, pounding and grinding can be heard everywhere.

I learn more about Revolution Square, so named because this is where it all began in December 1989. Nicolae Ceaușescu finally overextended himself and his crowds of paid supporters hired to produce a “spontaneous movement of support for Ceaușescu,” erupted instead into mass protesters. A short helicopter ride from the roof of his government palace placed him into military hands. Fast trial, condemned and executed before Christmas was over.

We are not allowed into the famed Palace of the Parliament at the end of Unirii Boulevard. Until June, the EU community is meeting there. However, we do drive around it for a conception of how massive the building is. Behind it, equally massive, is a yet-to-be completed Orthodox Church, reportedly to be the largest in the world when done.

In 1984, Nicolae Ceaușescu, impressed with the mass adulation of North Korea’s Kim II-Sung, decided to build himself a palace. Like most totalitarian dictators with grandiose egos, he envisioned a building to match his importance. A 1977 earthquake gave him the opportunity to demolish parts of Bucharest, including 19 Orthodox churches, six synagogues, three Protestant churches (plus eight relocated churches), and 30,000 homes. Almost 100,000 people worked on the palace over a period of 13 years at a cost of over 1.7 billion U.S. dollars. However, Ceaușescu proved to be a “dick” and was overthrown in 1989.

What to do with a monstrosity of almost 4 million sq. ft. and 1,100 rooms? A building said to be the heaviest in the world (it is sinking 6mm a year) and second in size only to the Pentagon building in Washington DC? For one, they could have sold it to businessman Rupert Murdock, though what he might do with a building that receives an electricity bill of over $6 million a year remains a mystery.

What was intended to be a private palace for Ceaușescu now houses the Romanian Parliament and conference centers. It is a colossal building and still unfinished! Only 400 rooms and two meeting rooms are complete and used. The building has eight underground levels, the last one being a nuclear bunker linked with over 12 miles of catacombs. Ceaușescu wasn’t too concerned with the people but he made sure he and his buddies would be protected inside 5’ thick concrete. Several residential apartments were included.

Nothing was economized on the interior. With over 3,500 tons of crystal; 480 chandeliers; thousands of ceiling lights and mirrors; monumental bronze doors; endless marble, beautiful woods and parquet; woolen carpets, velvet, and silver and gold embroidered brocade drapes, Ceaușescu spared no expense for his palace.

All in all, Ceaușescu’s dream is as ugly as was his ego. 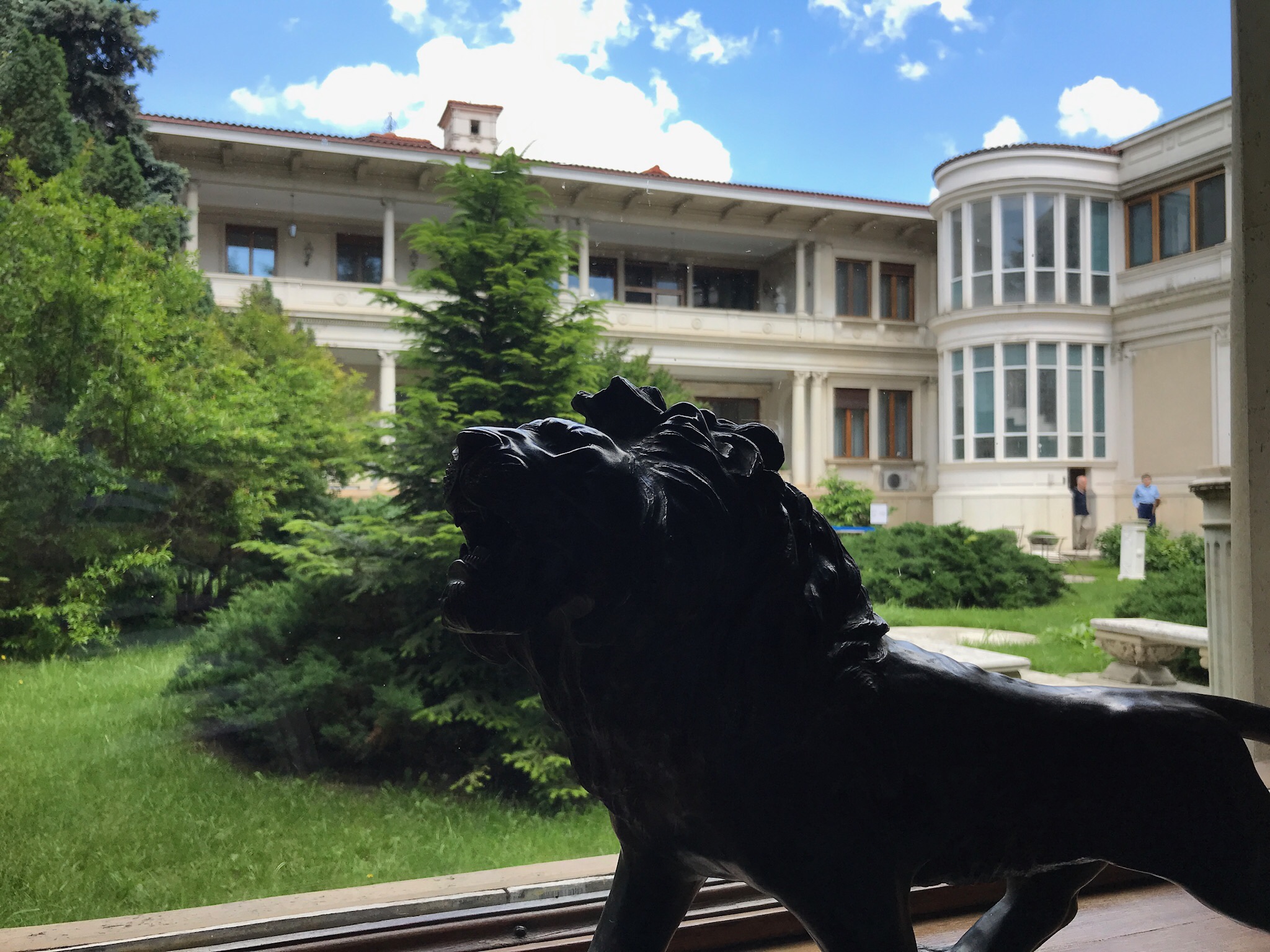 Because we could not tour the Parliment, we were driven to the elite side of Bucharest and embassy row to Spring Palace, just one of 70+ homes of Ceaușescu and his wife and three children. The house doesn’t look large but in actuality it has 174 rooms including 60 bedrooms and 30 bathrooms. We are given a wonderful tongue-in-cheek tour by Comrade Boris as he tells the story of the Conducator (the “Leader” as Ceaușescu liked to be called). He explained that the people accepted that their “dear leader” lived in a palace, but they did not know the lavish lifestyle until after his execution.

And, looking at the house and its furnishings, lavish it was. All “good Romanians” bought only Romanian goods; “good Romanians” worked hard and sacrificed for the sake of Romania. All Romanians, that is, except Ceaușescu and his family. Not many other Romanians had an indoor swimming pool, sauna, massage and hair dressing room, French champagnes, dinnerware from Austria, nor pet peacocks roaming the gardens. The closets were full of branded purses and shoes (Elena Ceaușescu’s feet had to be at least a nine), and wardrobes full of clothes and furs. The hypocrisy of the Ceaușescu’s lives in communist Romania could not be missed, even without Boris’ cynical commentary.

Bucharest would like to remind all of us, yet again, that it is not Budapest. And as for Dracula, Bucharest, even on a Monday night, is a pretty exciting place to be.