I last visited Bulgaria in September of 2016. I fell in love with Sofia and Plovdiv, all of Bulgaria for that matter. I did not know at the time that one of my closest DNA cousins is Bulgarian. Primal Instinct, subconscious reaction? It is exciting to be revisiting Bulgaria and meeting my cousins. 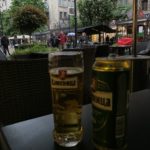 I arrived in vibrant Sofia, Bulgarian capital and home to one of the most spectacular churches in the country – Saint Alexander Nevsky Cathedral. Having toured many city sites in 2016, I plan to focus on more up-close-and-personal experiences for my overnight stay, like having a beer and something to eat. (For earlier insights, read my previous blogs about Sofia and Bulgaria.

I am lodging near Lion’s Bridge. A short walk from my hotel door and I am strolling the pedestrian, café-filled Vitosha Boulevard. At Sofia Café, I enjoy a cold Kamenitza, a favorite of several local Bulgarian beers costing about $2, accompanied by little snacks. From this vantage point, my plan of action depends upon fatigue: food, sleep or a walking tour. After my first beer, I opt for food and sleep. It is rainy, dreary weather best suited for relaxation and sleep after 24 hours in transit.

Plovdiv, a 2019 European Capital of Culture

A reasonable night’s sleep and I drag my carry-on across Lion’s Bridge to the bus station. My cousin’s advice is to avoid the slow train and take a bus to Plovdiv. My cost is little more than $8 for the scenic 2-hour trip to my second favorite Bulgarian city – Plovdiv. I travel through a mostly flat terrain and mostly asleep. The bus is full and I am still tired after waking at 3am.

This year, Plovdiv is being recognized as a European Capital of Culture and is the first Bulgarian city to be so recognized. A Capital of Culture is a city designated by the European Union for a period of one calendar year during which it organizes a series of cultural events with a strong pan-European flavor. The idea was the brainchild of Greek Minister of Culture and actress (Never on Sunday) Malina Mercouri in 1985. The goal is to annually designate a city as a Capital of Culture in order to bring Europeans closer together by highlighting the richness and diversity of European cultures and raising awareness of their common history and values. This year the cities are Matera Italy and Plovdiv. Hundreds of special cultural events are scheduled throughout the year. 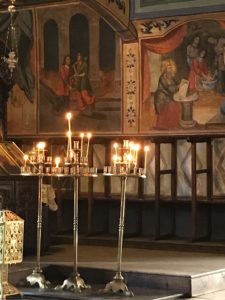 Plovdiv is an ancient city built by the Thracians and dating back to 4000 years BC. I was repeatedly told that Plovdiv is the oldest “living” city in Europe; nowhere else has human habitation lasted uninterrupted for so long. Plovdiv has a wonderful Old Town filled with unique Bulgarian Revival architecture, hilltop views over the Maritsa River, a 2nd century Roman Stadium, and a favorite church of mine, the beautifully frescoed St. Konstantin and Elena Orthodox Church (Constantine and Helena). The frescoes in the portico lead to a richly decorated interior with ornate iconostasis and chandeliers.

There are many places to eat along the modern pedestrian street of Knyaz Alexander I, all just a short walk from my room at the Villa Antica. After some nourishment, I attend a short 3D movie at the Emperor Hadrian–era Ancient Stadium. It attempts to re-create Plovdiv in the 2nd century A.D. The film does a rather poor job but young children might like it. Much more interesting is the knowledge that the long olympic track and marble seating for over 20,000 spectators lies under a major portion of the pedestrian avenue. The remainder of my afternoon is spent with an informative 2-hour free walking tour of Plovdiv.

For evening, The Opera café just outside my hotel is ideal for a dinner of veal tongue and mushrooms. A sound and light show plays in the nearby square while I savor my day’s experiences and eagerly await the arrival of my cousin.

Two events basically explain the world and its global connections. One is travel. The other is DNA. No matter where I have traveled, now numbering 85 countries, there are global connections. Our lives and their sagas are interconnected in a way only the study of history and travel exposes. What events motivated our ancestors to leave their homes and immigrate to new lands? History can assist in explaining and painting a picture of experiences. DNA can find those ancestor’s path.

DNA is a marvelous tool for genealogists. As a person who loves history, learning about my origins comes second nature to me. People should not separate one from the other. It is important that I understand history and my place in it. Generations become blurred but we are connected in ways we can’t imagine. The connections made through research and examining DNA can take one down unexpected paths. It does not change who I am, but it does connect me to others and the global world. Through DNA, I have found close cousins in both the southern Balkans and Bulgaria. What was my ancestor doing here? I can read history to predict reasons for my male ancestor passing into and out of this area some 500-700 years ago, but I will never know for sure. What I do know is I have relatives who were born and raised in these regions. And I am meeting one tonight.

Hundreds of years ago, my ancestor felt a need to migrate northwest through ancient Anatolia, travel through Bulgaria and into the Balkans. Ultimately, he landed in London, England sometime in the mid 1600s before being transported to the colonies in 1764 as a guest of Old Bailey. (He probably spoke Bulgarian and Croatian long before he learned English!)

My cousin Pam, now living but a short distance from this London ancestor’s dwelling, met me in Plovdiv. Over dinner and drinks, we share experiences and plan our week of travel around her homeland. Our first destination is her hometown of Stara Zagora where her parents live. They are third-fourth generation Bulgarian, their earlier ancestor having immigrated up from Constantinople after it fell to the Ottomans. Immediately, I feel welcome and special. Time and distance are surmounted by modern science and airplanes.