Smoke coming from behind the trees hints of an age-old craft few continue to practice in Romania. It is the making of charcoal, a hard and dirty job requiring long hours and inhaling lots of smoke. Men rise in early morning to start the long process which creates the fuel for Romania’s grilled street food. 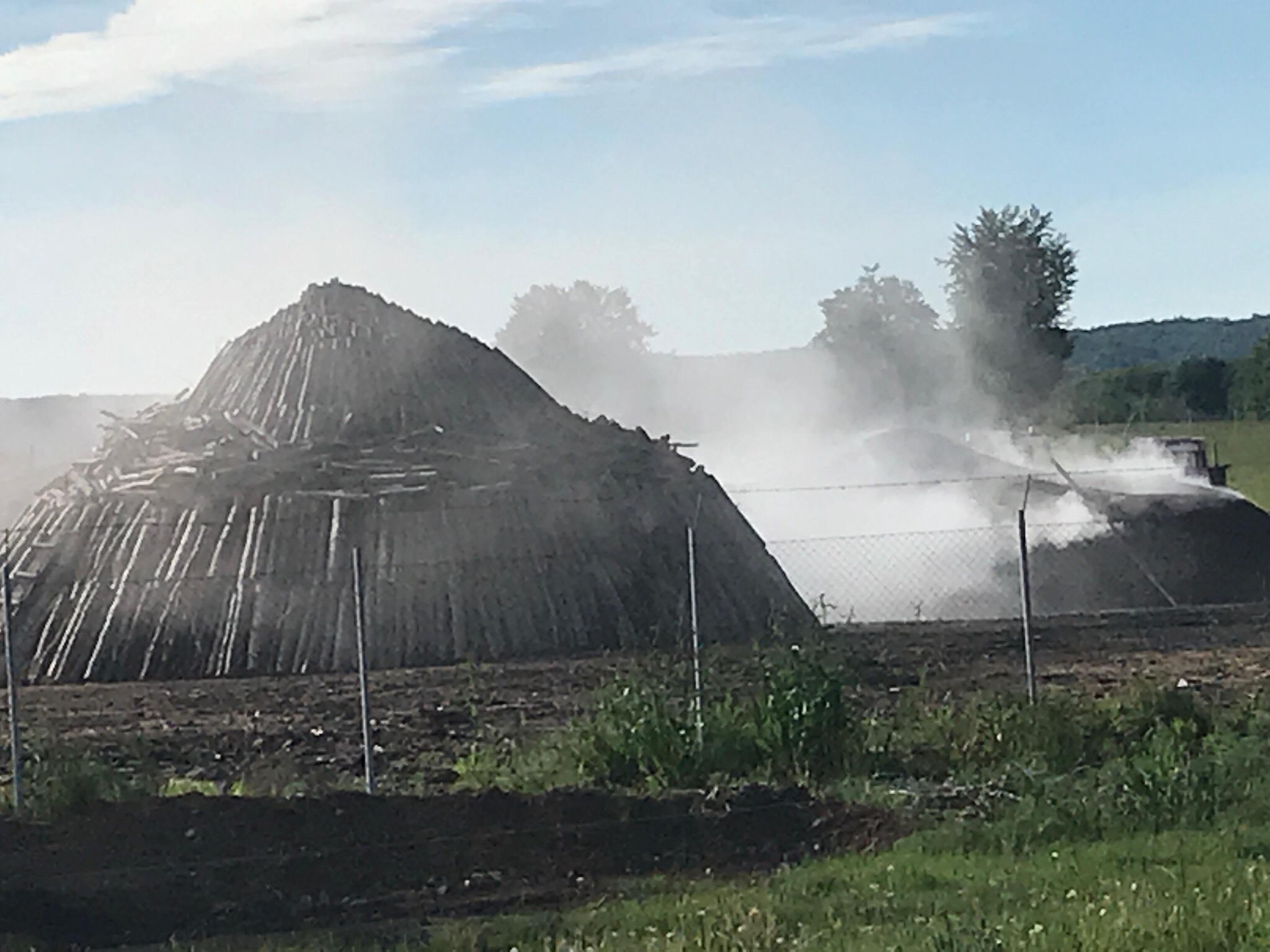 Burning beech, hornbeam and ash trees, good charcoal is mostly pure carbon, called char, made by cooking wood or other combustible materials in a low oxygen environment, a process that takes days to burn off volatile compounds such as water, methane, hydrogen, and tar. The result is a lightweight black carbon and ash residue and a cousin to our BBQ briquettes.

The smoke is powerful as a pile of timber slowly burns, producing a white plume of dense, unhealthy smoke to drift over the site. Workers are doing most of the work by hand. A pyramid of beech logs awaits its turn with the flames. Men, black faces and hands, soot-darkened clothes, rake the ashes, fill bags and boxes with char. Do they ever get clean? Someone must continually assure that the fire is smoldering at the right temperature, so this is not only back-braking dirty work but 24-hour work.

I watch the men, smoke billowing over them and us. The smell is not unpleasant but it can not be healthy breathing carbon residue into one’s lungs day after day. And the smell lingers. After just 10 minutes of observation at a distance of 50 feet, I can smell it on my clothes, on my skin.

The day is warm and sunny. We motor deeper into the Eastern Carpathians, north through mountains and over passes, surrounded by coniferous forests and national parklands. The passes and valleys are stunning. Our route takes us up and over three high passes at the 4000-foot level. Wispy clouds float among the high green peaks. Villages vary from small and comfortable chalets to the rustic villages of hard-working citizens of Romania. This is an historic area and has seen the passage of peoples for centuries. Ukraine is just 50 miles to the north, Moldova just 80 miles east.

Men with scythes work along the roads and in the fields cutting the grasses and wheat. Seems far more efficient than the scores of men I have seen trying to keep ahead of Romania’s grass and weed with weed wackers. Horse-drawn carts are common sights on the roads.

We top Calonda Pass and pause at the small commune of Corond. Inhabitants are well-known for their handicrafts. Most of the 5000 families earn their living by crafting pottery, ceramics and wooden crafts. However, the parade of kiosks along the main street are crammed with baskets,  stuffed animals, and souvenirs made in China.

This commune historically was part of the Székely Land region of Transylvania. From 1876-1918 it was in the Kingdom of Hungary. After 1920 it became part of Romania, Hungary in 1944, Romania in 1947, part of the Hungarian Autonomous Province 1952-1960, and after 1968 back to Romania. The ethnicity of the region is 97% Hungarian. Many residents continue to seek independence for their territory.

An explanation about spellings: because of the centuries of close relationships of the ethnic groups in this area, many names are spelled according to who is doing the spelling. The Romanians spell the pass and village “Calonda and Corond” while Hungarians spell them “Kalonda and Korond.” I try to respect the pronunciation and spelling of the country I am traveling. This region is one of the most difficult to follow. In most cases, the pronunciation is well beyond my skills.

We continued into the “Salt Region” to visit the Salt Mine at Praid in Harghita County. Praid possesses the largest salt deposits in Romania having estimated reserves of 50 billion tons of the stuff. The geological age of the salt deposits, thousands of feet deep, is about 20-22 million years. These mines have been active for over 1000 years, first referenced in 1092. Salt mining is always interesting, not so much for how they mine but what they do with the mines afterwards. I have had some great experiences touring the depths of salt mines in Hallein (Salzburg) and those in Wieliczka, Poland. 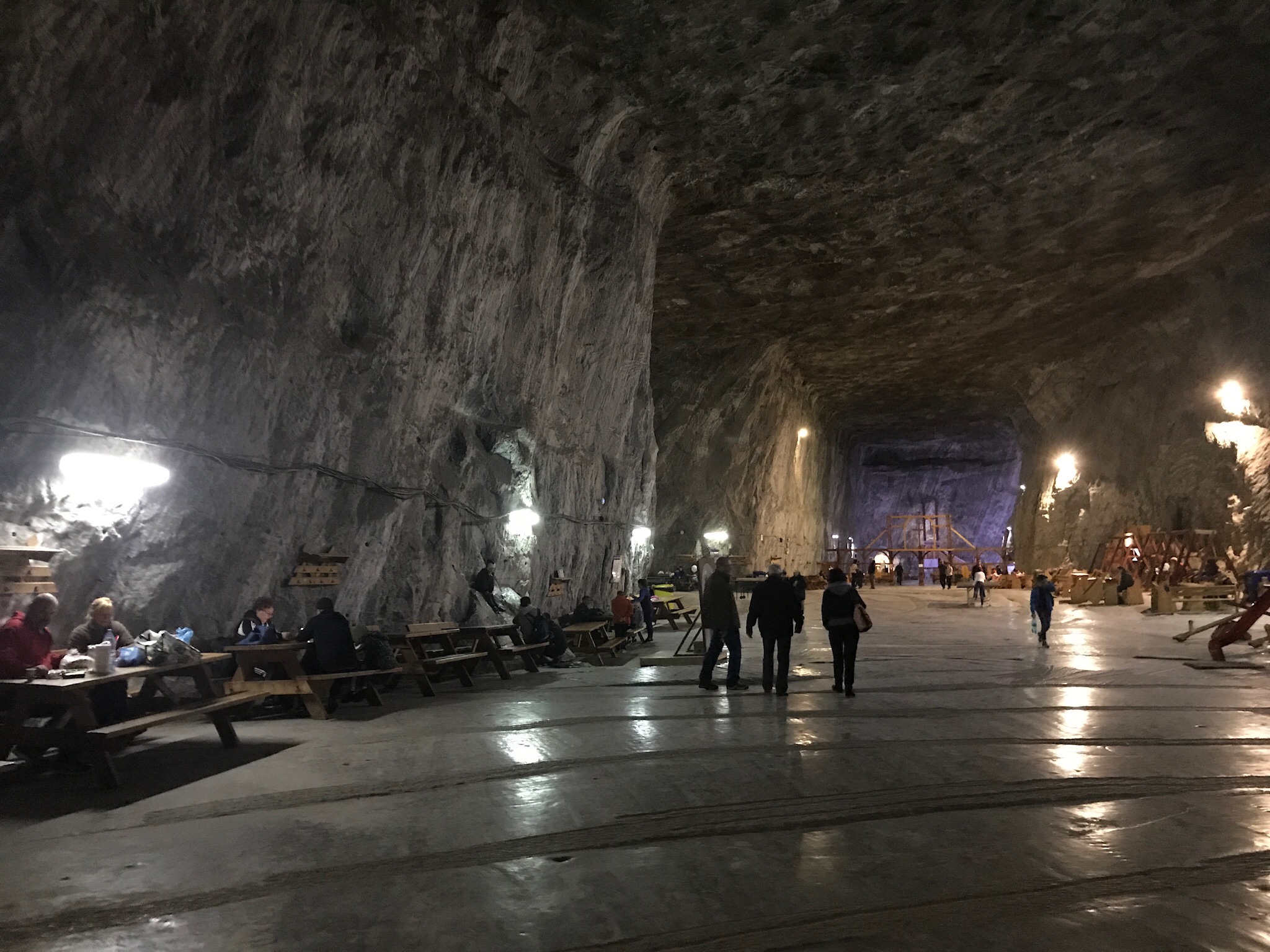 A full-sized bus descends far into the mines, some 230 feet. From there, one walks several feet more down steps and narrow hallways, into wide galleries and spectacular halls and under salt domes all carved from the salt deposits. The floors are as shiny and smooth as the most expensive marble. There are many displays, movies, billiards, and excellent internet and cellular service. A restaurant is available for refreshments. But the journey is not just for tourists.

Today the salt mine is a sanatorium for children who suffer from asthma. The air is pure and dust free. They come here to live and sleep for several weeks while they receive care for their condition. This virtual underground city is complete with a hospital, playground, and underground church. 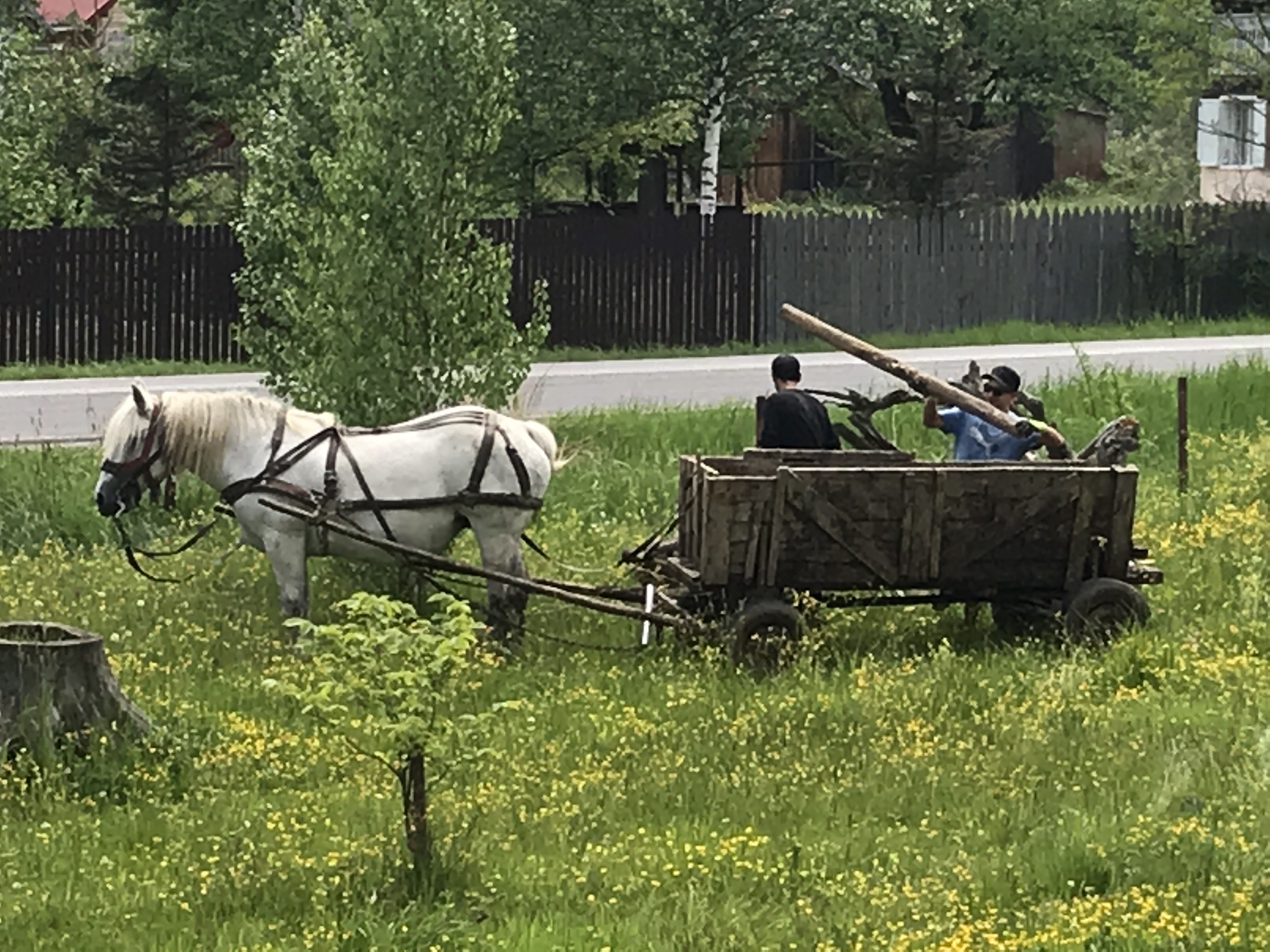 We continue our windy, mountainous course east and northward through gorgeous scenery often referred to as the “Switzerland of Transylvania.” Our lunch spot is overlooking the mountains and beautiful yellow pasturelands. A cuckoo bird calls to her mate nearby. A man loads his cart with fence posts then his energetic white stallion pulls the cart home. It couldn’t be a more idyllic scene if we paid for it.

Departing spectacular Harghita County, we enter the even more stunning scenery of Neamt County and Moldova Province. Our route takes us over the Bucsin-Pass of the Eastern Carpathians and by Lacu Rosu, nicknamed Killer Lake, with its unique landscape. The lake was formed in 1837 when rock slides closed off several streams and created the lake; the red color of lake water comes from rubble. But we are told the local legend is an avalanche took out a heard of sheep along with their sheep herder; the red was the hapless animals’ blood seeping into the water. Either way, doesn’t keep the crowds of vacationers out of the water. Above the lake is the tall and majestic Tunder or Fairy Rock. Residents have stunning views of the mountains and thick forests. 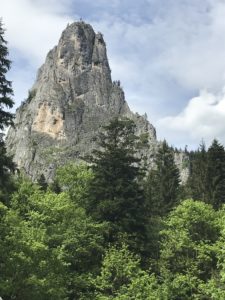 Further down the twisting road is the Cheile Bicazului, a mighty outcropping of rock atop of which a courageous rock climber has erected a large cross. We are traversing the Bicaz Gorge which is part of the Cheile Bicazului-Hășmaș National Park. The gorge was carved over the millennium by the waters of the Bicaz River. We motor through tall walls of rock which act as a magical passageway north.

Much of this area is considered part of the Carpathian Biosphere Reserve, a biosphere reserve established as a nature reserve in 1968 and later as part of the UNESCO World Network of Biosphere Reserves, recognizing the importance of these ancient beech forests of the Carpathians. It is well-deserved. We drive through the valley, high walls of green on either side. Passing through the narrow Bicaz Gorge we trade towering forests for 320-foot high walls of granite. Clear streams of water rush downhill. We eventually break out of the mountains to descend into another valley to turn northward, crossing and following the Moldova River.

Our destination, and home for the next two days, is Voronet, a town and region so special they named a color for it.