In nearby Shipka, atop a high crest and surrounded by gardens and forests of green, is the beautifully ornate Shipchenski Manastir Rojdestvo Hristovo, or Birth of Christ Church. It’s golden onion domes can be seen for miles. The red brick exterior facade is designed with bands of frescoes, arched windows and gold trim. It resembles a beautiful wedding cake with lots of delicious frosting. It’s geometrically designed peaked bell tower is spectacular.

The church was built with Russian and Bulgarian cooperation and preserves the remains of more than 9000 soldiers killed in the Russo-Turkish war. The ornate church is built in the style of the 17th century Russian churches with five large golden onion domes. The bells were made from melted bullet shells gathered from the battlefield. Inside are bright, colorful frescoes and a lovely iconostasis.

South of Stara Zagora are ancient Thracian settlements. The historic region of Thrace, so named by the Greeks, was located in the southeast corner of Bulgaria bordering Greece and Turkey. Thracians’s were early Indo-European tribes who inhabited Southeastern Europe, the area first referred to as “Europe.” Thracians thrived in this area of Bulgaria and many of their settlements and artifacts are being unearthed and explored today. One of the most important discoveries is within what is now being called the “Valley of the Thracian Rulers.”

The Valley of the Thracian Rulers describes the extremely high concentration and variety of monuments of the Thracian culture found here in the Kazanlak Valley. Thracians long inhabited fortresses and settlements along the mountain passes and fertile river valleys of this region. It is believed that there are over 1500 funeral mounds and subterranean tombs of kings and aristocracy in this region, with less than 300 being researched so far. Only a handful have been explored.

Kazanlak is a small town just 21 miles northwest of Stara Zagora. This UNESCO site offers some of the most significant Thracian tombs in the country. The oldest settlement in the area dates back to the Neolithic era (6th-5th BC). During the 4th-3rd centuries BC these lands were overseen by the Thracian ruler Seuthes III and were important in the historical development of Thrace during the Hellenistic era. 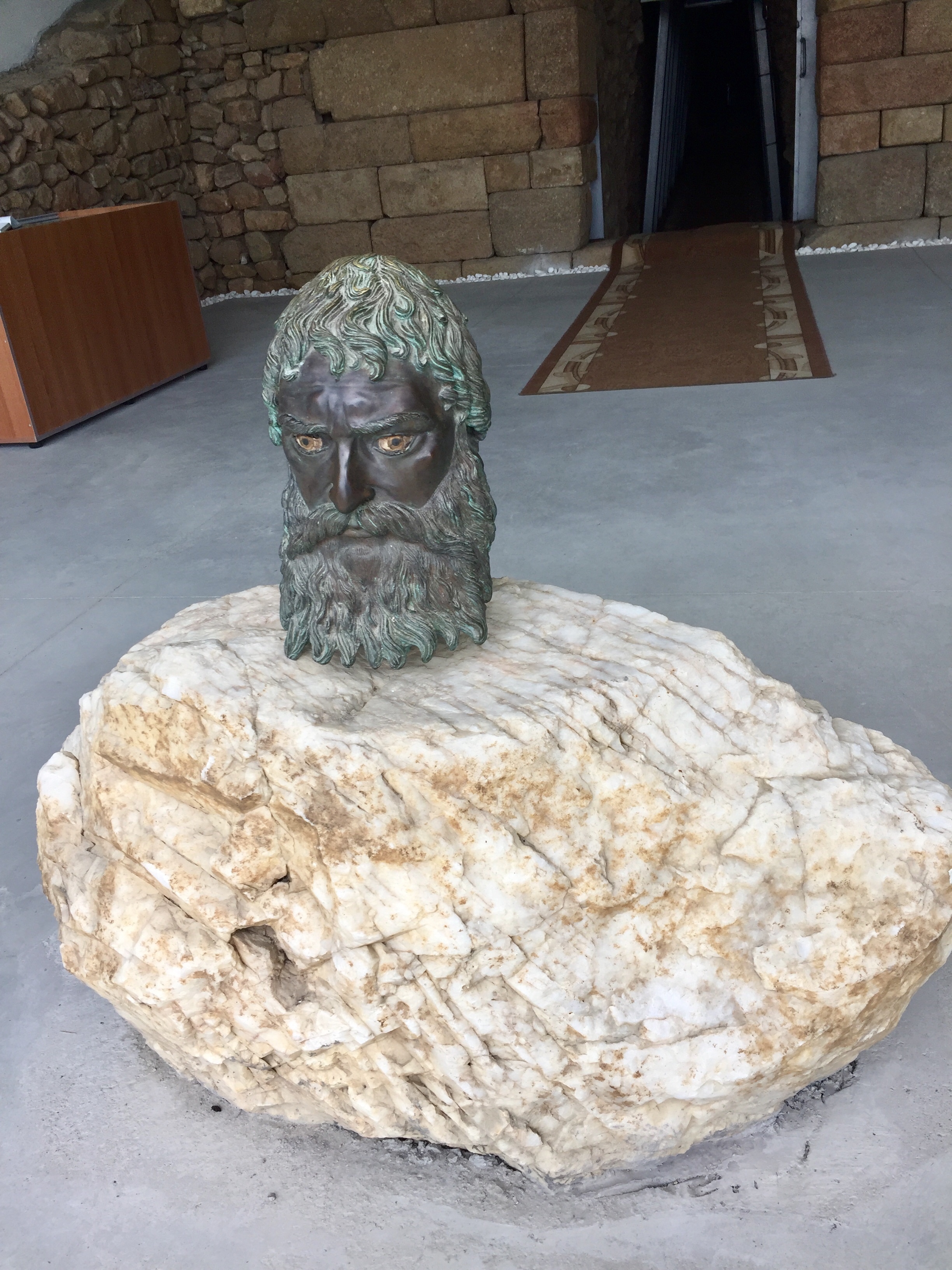 Discovered beneath a rounded mound in the middle of flat fields is the impressive heroon (a temple-tomb of a great hero of royal status) of Seuthes III, or the Kosmatka Tomb. In 2004 a group of Bulgarian archaeologists excavated a large mound of dirt to discover this large and intact mausoleum dating from the 5th century BC. It is thought to be the richest Thracian tomb ever found in Bulgaria. More than 70 silver, gold and bronze objects, which were used as ritual offerings to the gods, were discovered, all now exhibited in the Iskra History Museum in Kazanlak. Remaining is a reproduction of a bronze bust of Seuthes III, the King of the Odrysian Kingdom of Thrace from 331 to 300 BC and founder of nearby Seuthopolis. The tomb was actually used for a symbolic burial ceremony of Seuthes III long after his death; the temple was then closed and the entrance sealed and buried.

The tomb begins with a 40′ corridor with three consecutive large rooms. The first room is rectangular and has a double-pitched roof. The next room is circular and domed, while the third room resembles a sarcophagus and is carved in a huge stone block with double-pitched roof. It was in this last room that was found the famous sculpted head believed to represent Seuthes III (original is in Kazanlak Museum). The eyes are made of alabaster and glass paste and the eyelashes and eyebrows from copper strips. 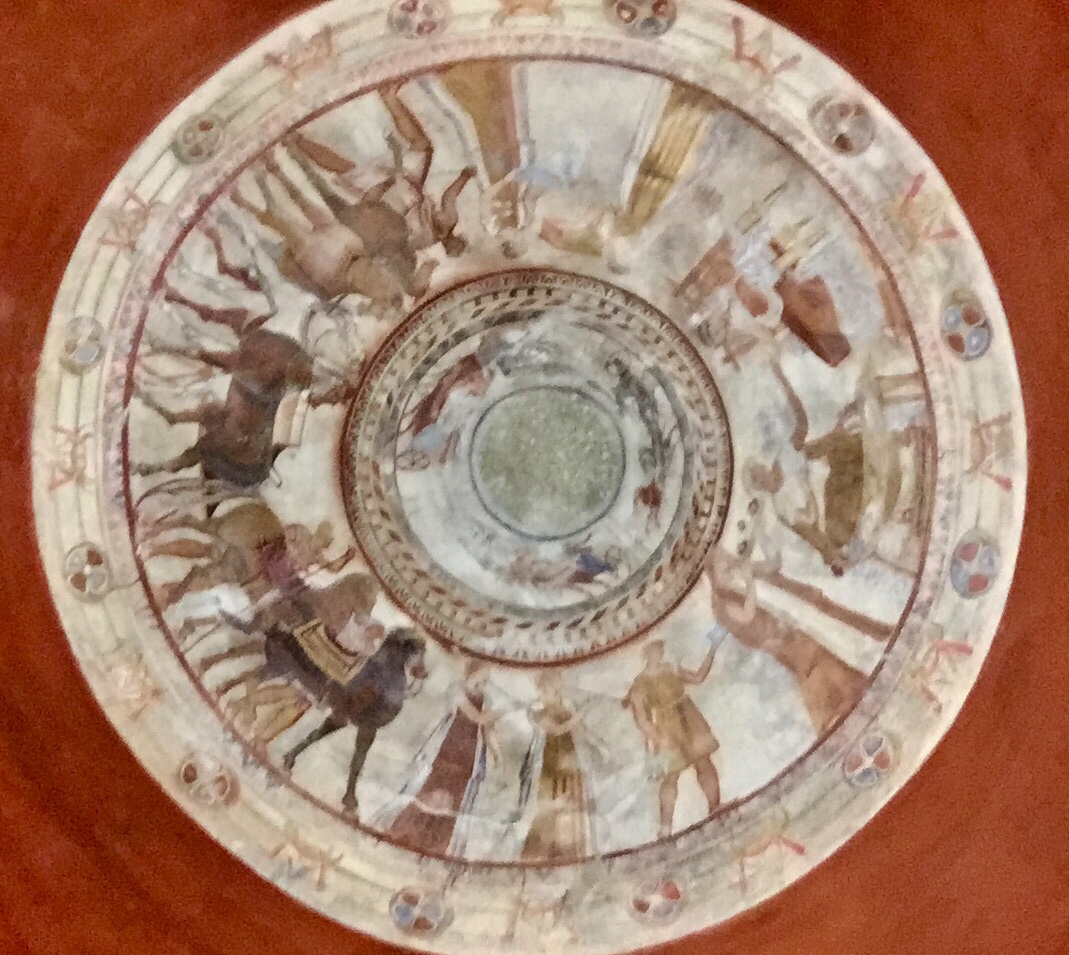 Within the Thracian capital of Seuthopolis, the Thracian Tomb of Kazanlak was built. This 4th century BC Tomb, a UNESCO site, is a brick and vaulted “beehive” tomb. It comprises a narrow corridor and a round burial chamber, both decorated with vibrant murals representing a Thracian couple seated in a carriage drawn by magnificent horses and attending a ritual funeral feast. The seated woman of the murals is depicted on the reverse of the Bulgarian 50 stotinki coin.

The actual tomb is protected and closed but nearby an exact duplicate has been constructed. The frescoes are in excellent t condition and the explanation of the tomb is in English. For the priceless artifacts found within this and other tombs, we walk to the excellent Kazanlak History Museum.

Mounds are found all over this valley. Beneath them, archaeologist are finding ancient Thracian royal tombs, artifacts of the Byzantine and Roman eras, and priceless gold artifacts of exquisite design. Possibly the most exciting recent find has been the teeth found near Chirpan that date to over seven million years ago! This could eventually prove that prehistoric humans could have existed in the Balkans long before Lucy walked the Rift Valley of Ethiopia.

In the same area as the Tomb of Kazanlak is the Koulata District, the oldest part of the city. Lining its charming cobbled-stone streets is the traditional architecture of the Bulgarian National Revival of the 18th–19th centuries. The entire district is considered the Koulata Ethnographic Complex and is comprised of restored buildings and shops. Kazanlak was a famous crafts town and today more than 50 handicrafts are on display from coppersmiths and goldsmiths to violin-makers.

This area is also the center of Bulgaria’s famous rose oil-producing region.

One of the crafts I am most interested in is the production of rose oils. Bulgaria is the major supplier of a unique rose oil and Kazanlak’s rose gardens are the largest rose gardens in the world.

The oil-producing rose was originally imported from the central Asian countries of Persia, Syria and Turkey and the Bulgarians of this region have mastered the art of producing the finest, purest rose oil in the world. The proper temperature along with high moisture and light, with sandy, cinnamon-forest soils were ideal for rose cultivation. The Rose Museum is dedicated to the craft of rose-harvesting and rose oil production and does a fine job of explaining its history and production. It also sells quality oils. While the popular Rose Festival is early June, by May the air is filled with the sweet fragrance of vast fields of these unique oil-producing Kazanlak roses. 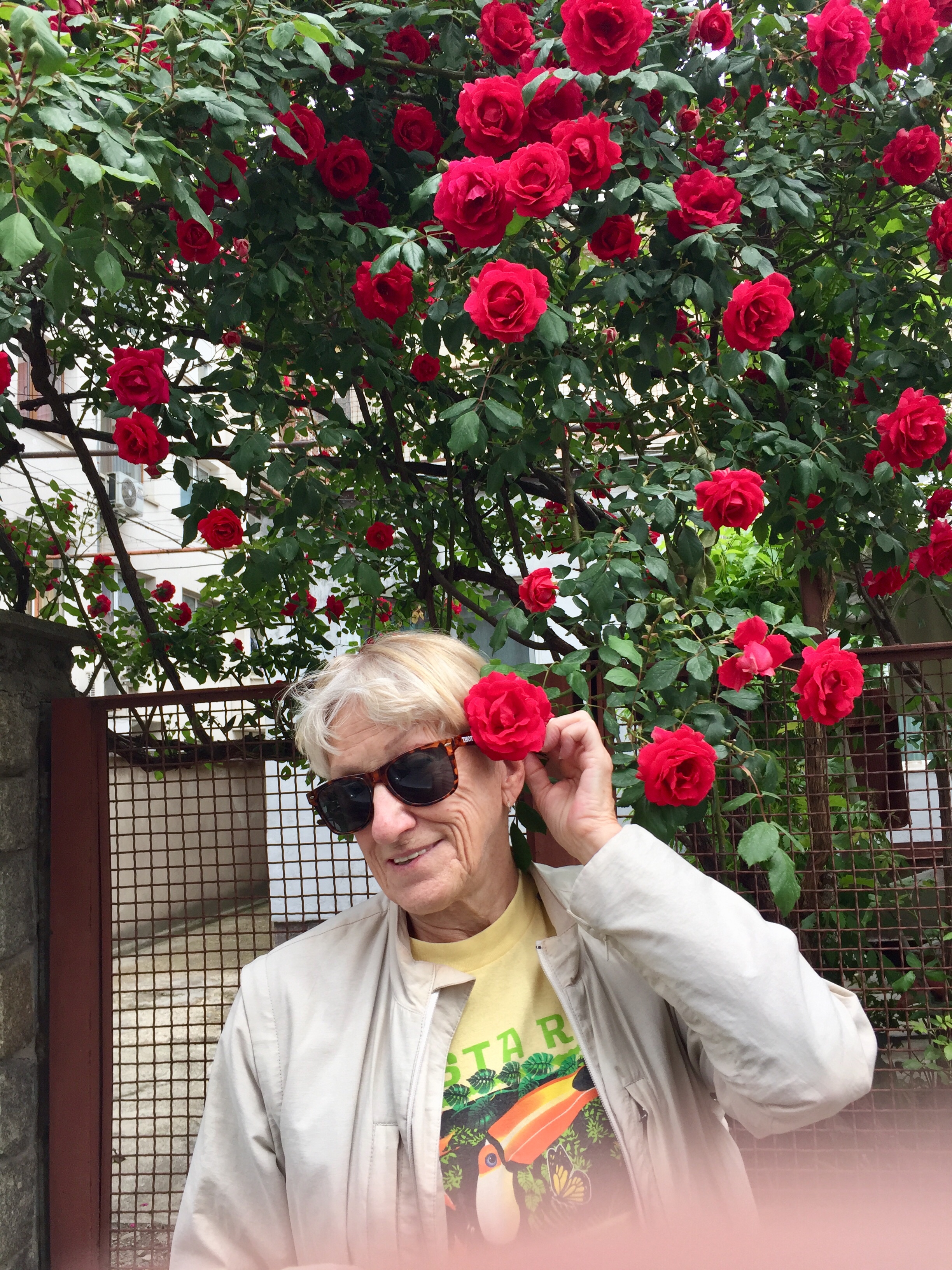 We complete our day with the civilized tradition of coffee and gossip. What surprises me about Bulgaria? The Thracian history, the ancient origins of Man which seem to blossom on this land. Do my ancestors carry Thracian blood? What did I like best? The monuments, always a favorite, for they tell much about a culture and its history. I gained a new insight into the history and respect for the Russian soldier who came to this country to assist the Bulgarian gain his independence from the hated Ottomans. This sacrifice resonates with the history of the American soldier who came to Europe to fight in World War One, my ancestors who came because it was the right thing to do.

I am receiving royal treatment. My education about Bulgaria and its history continues.