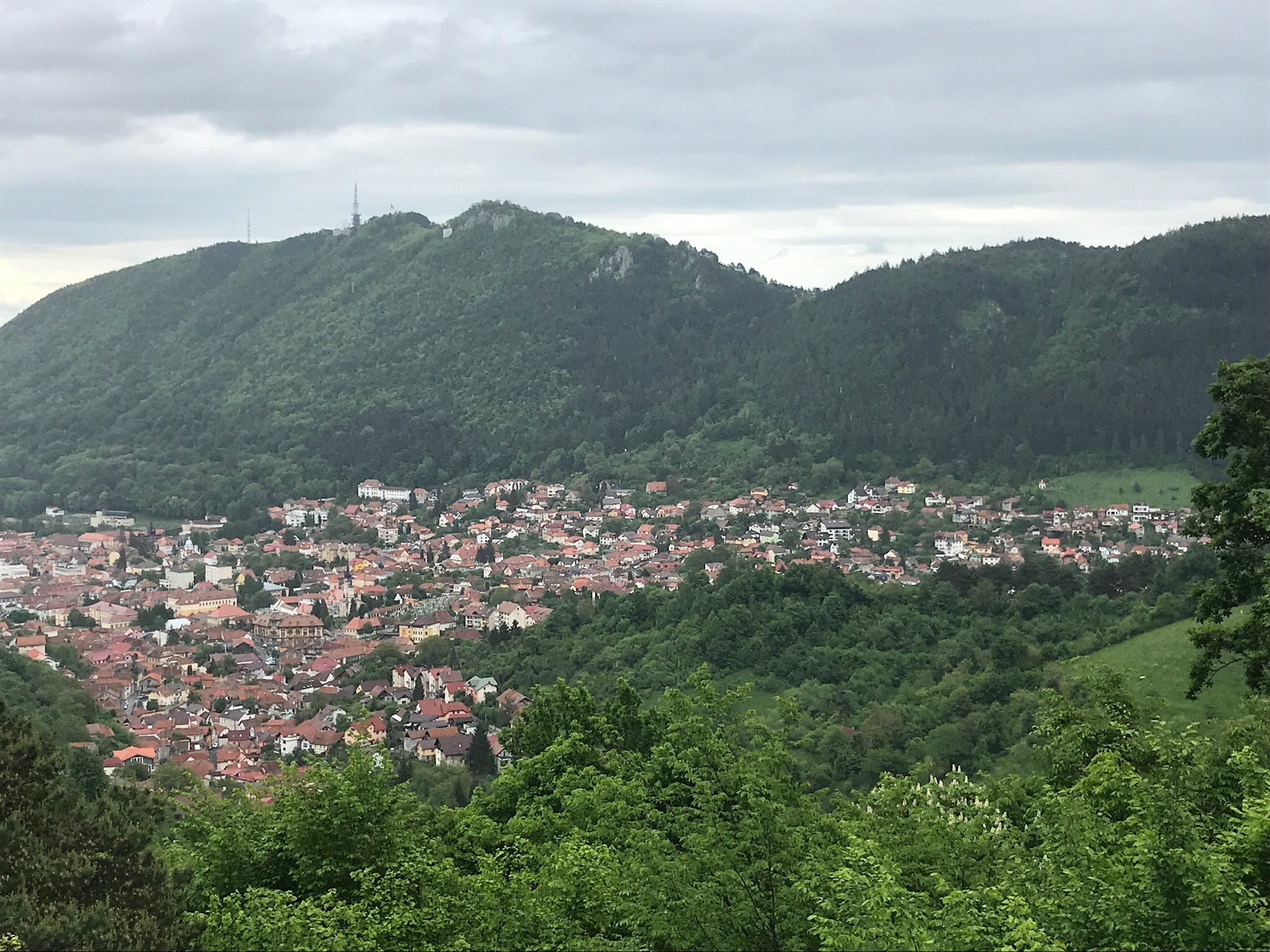 Brașov lays within the loving southeastern curve of the Carpathian Mountains and its location is breathtaking. Its oldest traces of human activity and settlements date to the Neolithic age (about 9500 BC). Brașov is an important Saxon city and its architecture, fortifications, towers, churches, town square, and history are outstanding. Not only is the city the birthplace of the Romanian national anthem, but the birthplace of one of Vlad Dracul’s lady friends. 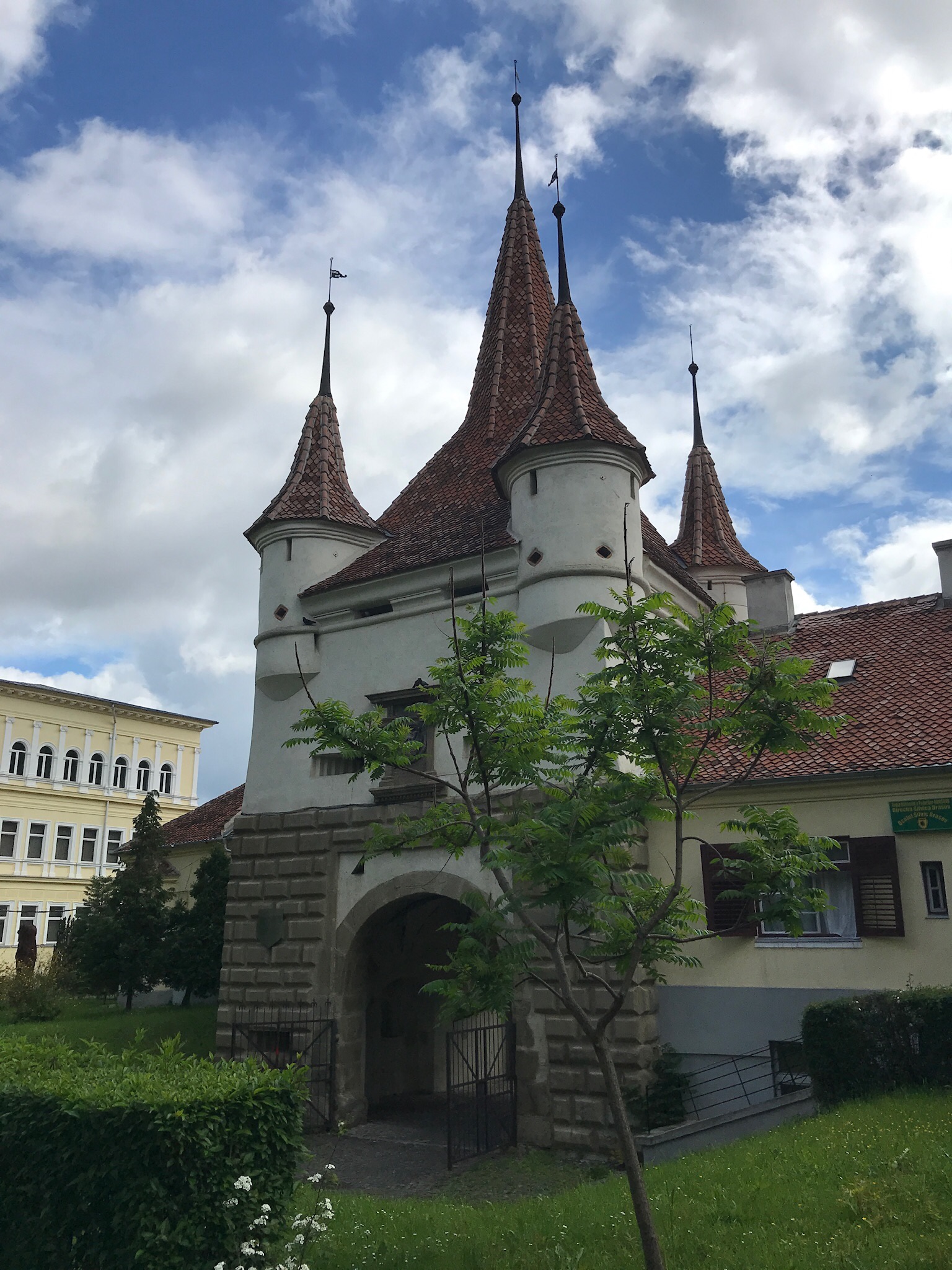 Between 1141 and 1300, German colonists, mostly from Old Luxembourg, known as Transylvanian Saxons, were invited by the Hungarian kings to come and develop towns and industry. The king thought they would make a good buffer against the Tartars. In 1211, King Andrew II of Hungary asked the Teutonic Knights to further fortify and defend the border of his kingdom and the knights built on the site of Brașov. It was never a good idea to “invite” the Teutonic Knights as it was usually hard to get them to leave, but these crusaders were finally evicted by 1225. However, the German colonists remained.

Brașov Saxons (they called their town Kronstadt) were involved in trade and crafts as the city sat at the intersection of vital trade routes linking the Ottoman Empire with Western Europe. The merchants flourished as did the town. Fortifications, impressive gates and several towers were built representing the different craftsmen’s guilds, according to medieval custom. In 1689, a conflagration of fire destroyed the walled city but it was rebuilt. And the colonists remained. Along with the Saxons, a small population of Romanians and Bulgarians also thrived. 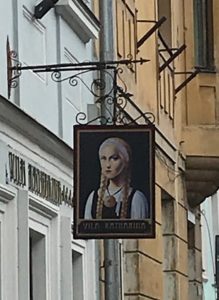 Brașov was also home to blonde, blue-eyed Katharina, the 17 year-old daughter of the Weaver’s Guild leader, a very important man. In 1455, Katharina attracted the ardent attention of a prince and the man who was military governor of Brașov. She was educated in a Franciscan Monastery and lived with her parents at Str. Poarta Schei No. 14; her home stills exists. Her suitor, twice her age, was a kind and gentle lover and from their union, which lasted more than 20 years, there resulted five children. The Saxon townspeople were less than thrilled by this relationship, not so much because her suitor was already married, but more so because he had quite the reputation and was known to them as Vlad the Impaler, Vlad Tepes of the family of Dracul.

After 1918 and the dissolution of Austria-Hungary, Transylvania joined the Kingdom of Romania, which already was made up of the principalities of Moldavia and Wallachia. The Saxons and other German groups like the Swabians become minority groups. Since WWII, their population has steadily decreased.

Relatively few Germans still live in Romania. As in other Balkan countries colonized in this manner, the German colonist were not welcome. Transylvanian Saxons started fleeing the territory during and after World War II. During the Communist era and after the collapse of the Nicolae Ceaușescu regime in 1989, approximately half a million fled to a reunified Germany. 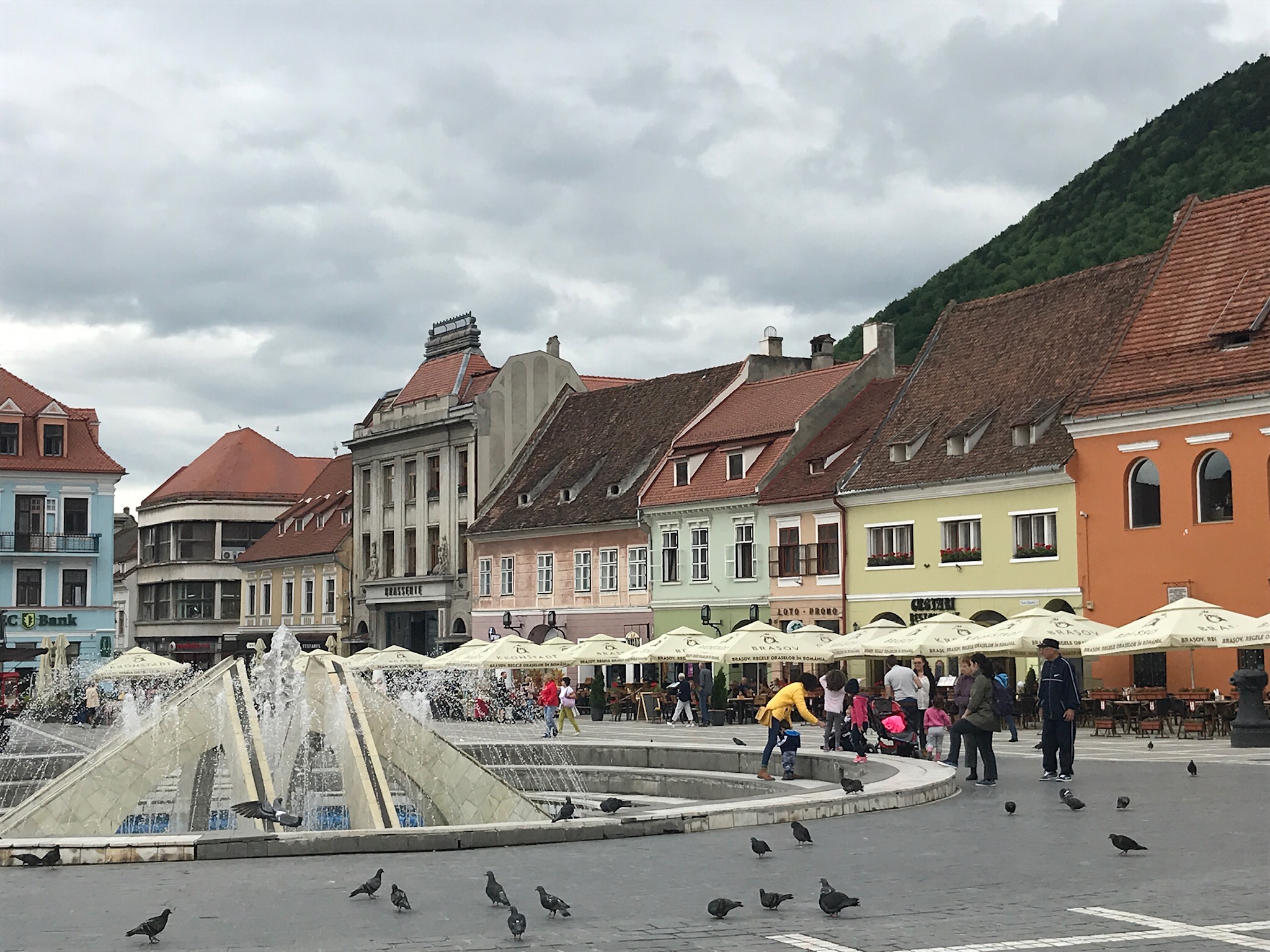 Brașov is a well-preserved city, having been spared any bombings or world wars. Two fortified gates remain as does the city’s beautiful Council Square, or Piața Sfatului. Facing the square are some of the oldest buildings in Brașov, including Casa Statului (mayor’s offices) and the Hirscher Haus. Council Square is the historic center of Brașov and site of their town markets since 1364. Surrounded by 18th-19th century houses, this large square is a plethora of shops, restaurants and cafes; a former town hall turned Museum of History and modern water fountain are also found there. However, what towers over the square is the massive structure and 250-foot tower of Biserica Neagră or Black Church, possibly the largest Gothic church in Southeastern Europe. 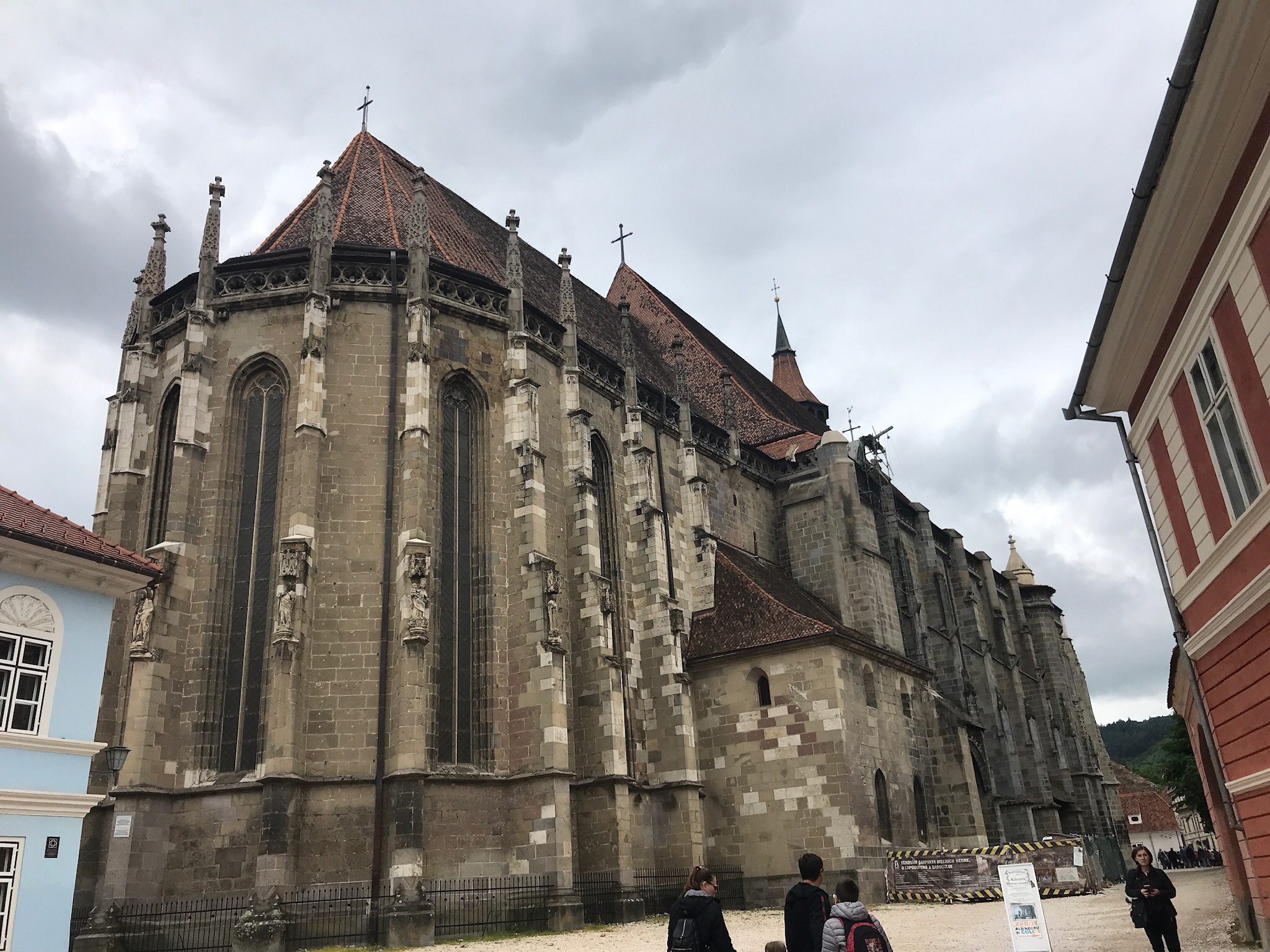 The originally structure was Roman-Catholic and known as the Church of Saint Mary. Work seems to have begun as early as 1383 using Bulgarian workers. Today’s church was built by the German community around 1476 and its Gothic architecture is because most of the architects and masons originated from German territories. Strangely, it was built facing away from the square. The Black Church actually gets its nickname from a massive fire that blackened its walls, set by invading Habsburg armies in 1689.

Catholic services were replaced with Lutheran ones during the Protestant Reformation in the 16th century. After the conflagration in 1689, parts of the interior design were modified, mainly because the masons brought in to do the work had not mastered the original vault design so completed sections in the Baroque style instead. The church’s main weakness is that the outer structure was mostly constructed of a grit material which deteriorates with time, causing many of the sculptures and design elements to be destroyed. However, the little boy at the top of the roof remains. Story is he was tricked by his boss to look over the roof at the straightness of the walls and was pushed to his death.

Biserica Neagră is 292 feet in length and 125 feet wide. It soars 213 feet from the floor to the highest point of its bell tower with its six-ton bell. The impressive 4,000-pipe organ has continued to play since 1839 (though unfortunately not for us). Rugs donated by Transylvanian Saxon merchants have decorated the walls since the 15th century. The church is fairly plain, but the naves, vestry, octagonal pillars and portals provide a glimpse of the original beauty of the catholic church. 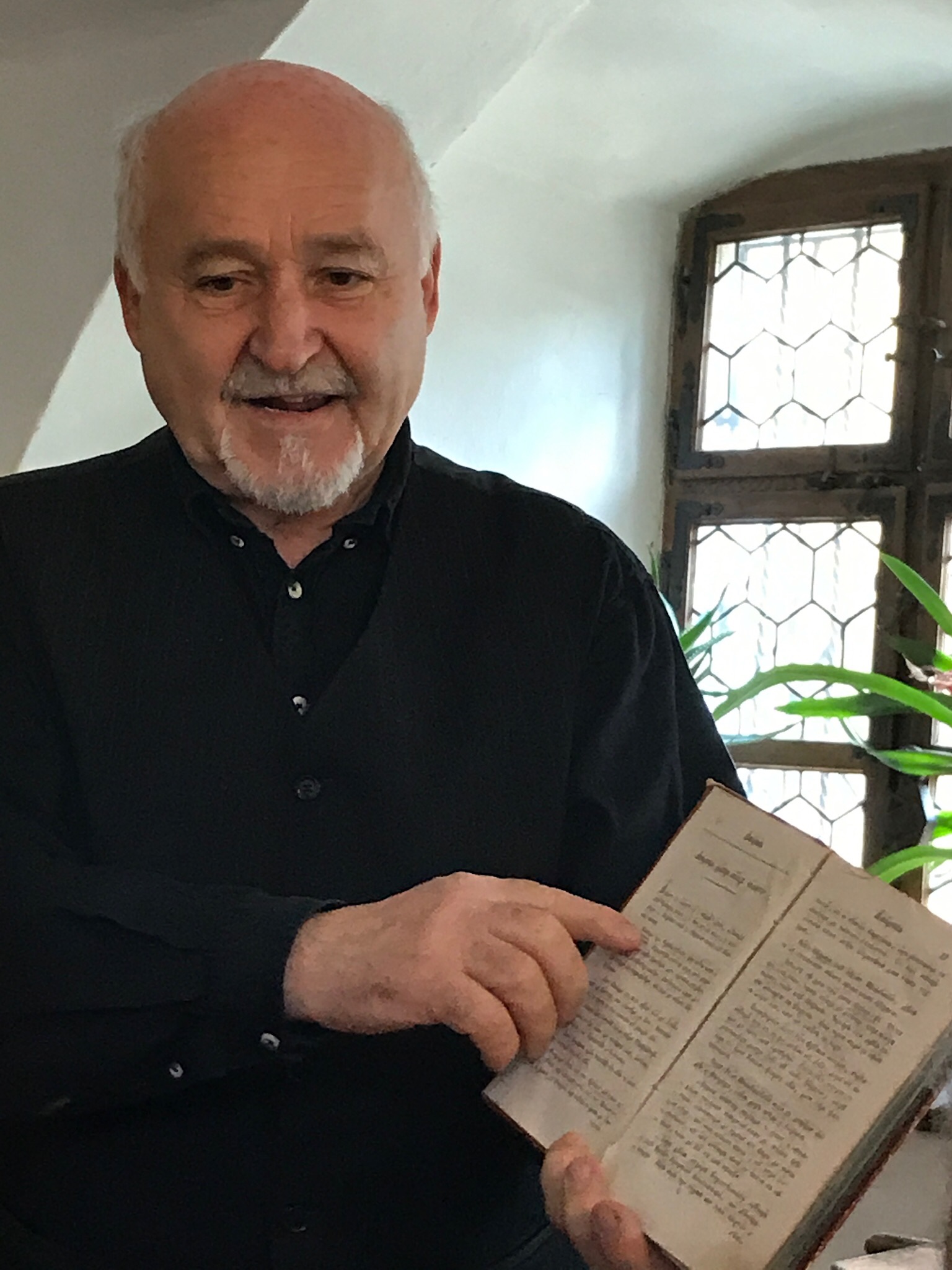 We also visited the First Romanian School and met with an amazing priest who explained the school/museum and the priceless collection of books housed there. A huge selection of early Slavic and Romanian books are in storage: the first Romanian Bible, old maps and geography books, and assorted history books are on display. The library contains six thousand books which were used in the school. All these have survived because they were hidden from the communists. Also on display is the first printing press in Romania.

The priest has written dozens of books, translated manuscripts, and appears to be the sole historian preserving this treasure. There are scores of Slavic manuscripts and ancient scripts yet to be translated and he is determined to remove all from their hiding place so others can learn from them. The man is a national treasure.

Next door is the 16th century St. Nicholas Church. Originally built of wood, this version is of stone. Its long, narrow interior is stunning with walls and arched barrel ceiling adorned with 19th century frescoes. Persian carpets cover the floor. The frescoes, muted in colors from decades of smoke, could use a cleaning. Overall, the church is very nice.

The old city of Brașov is surrounded by hills and mountain ski resorts and can seen by taking the cable-car to the top of nearby Tâmpa Mountain. But, for the most spectacular view, we drive the short distance toward Râșnov. There we get to see a castle fortress and the view.

Râșnov is a small town just 10 miles southwest from Brașov on the road to Bran Castle. The city is home to a restored peasant citadel built by the Teutonic Knights about 1215. I need not ask for more.

Teutonic Knights knew how to build and they knew how to defend. While the village of Râșnov was razed many times in its history by Tartars, Turks and Wallachians from the far north, the enormous castle was conquered only once, in 1612. By then the Knights had lost their card of invitation and were gone. But like all fortresses built by the Teutonic Knights, Râșnov Castle is enormous and impressive. When warned of attack, all the villagers could climb to the castle where they had a private apartment in which to live until the threat was gone. In all, some 90 families could live within the fortified walls. And the panorama from the battlements is stunning. 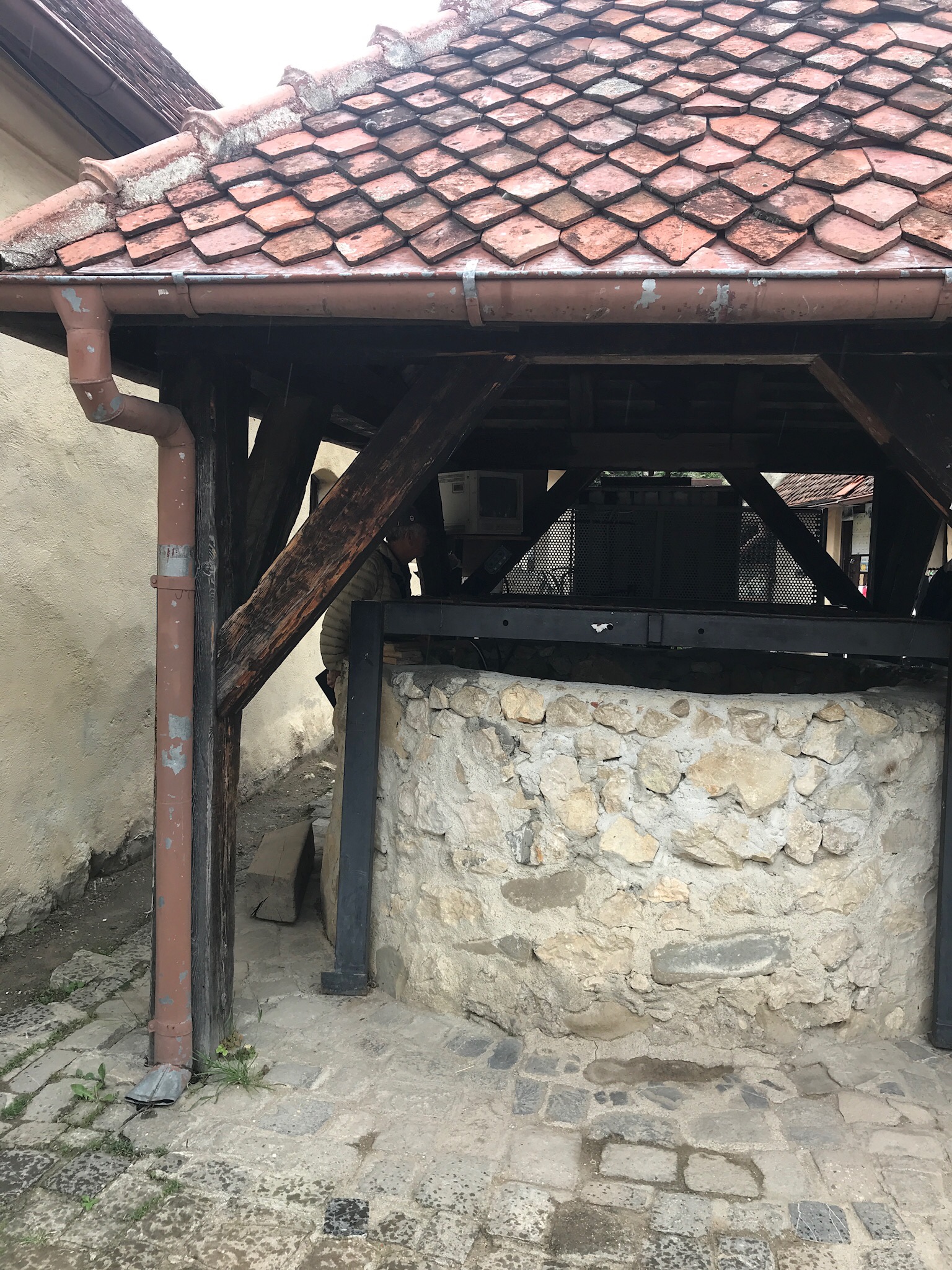 Digging – a matter of life and death

There is a myth attached to the citadel. During a particularly long siege of the fortress, the citizens of Râşnov were concerned about the lack of available fresh drinking water. Two Turkish soldiers, having been captured earlier, were put to the task of digging a well in the center of the fortress. These two men were assured they would be given their freedom once the well was completed. According to local legend, it took them 17 years to finish the well. This same well sits in the center of Râșnov Castle, and is 469 feet deep. The prisoners probably should have dug even deeper as they were still killed afterwards.

Râșnov Castle is known for a couple other more modern-day reasons. In 2002, the castle and surroundings were used in several scenes from the film Cold Mountain, which related the story of a wounded deserter from the Confederate Army during the American Civil War. Those Turkish well-diggers and the movie-going public shouldn’t believe everything they hear.

Also, in 2013, the base of the castle’s hill was used for the Rockstadt Extreme Fest, the first extreme metal festival in Romanian. Featuring bands such as Decapitated and Napalm Death, one can only wonder if the Turkish well-diggers were awakened from the dead after all those centuries. Surely Vlad the Impaler would roll over in his grave.