In the next 2 miles, I will pass six World Heritage Sites as we motor across the Chain Bridge to the banks of Pest and down Andrássy út which links Buda with the Városliget or City Park. Andrássy is a broad and elegant boulevard which dates to 1872 and lined with spectacular Neo-Renaissance architecture and ornate facades. Not only is the Chain Bridge a UNESCO site, but so are the banks of the Danube, and Andrássy út is the only street I am aware of that is recognized as a World Heritage Site.

Apart from the 19th century neo-renaissance and baroque mansions along the tree-lined street, some of its most beautiful buildings include the Hungarian State Opera House (behind scaffolding), the Liszt Music Academy, and the Ballet Institute. UNESCO buildings include St. Stephen’s to my left, and beneath me, the Millennium Underground M1 metro, the first continental metro line in Europe (built 1894-96), which runs parallel with Andrássy út.

Passing the House of Terror, I am reminded of Hungary’s many political victims of the Nazis and Soviet regimes. Within its walls are the stories of oppression and surely lessons to be learned by all of us. And conspicuously dominating the top of the boulevard is a sixth World Heritage Site: Hősök tere or Heroes’ Square.

In this square are the grand statues commemorating the history and leaders of the seven tribes who founded Hungary. The three main sites of the square include the Hall of Art, built in 1896, the Museum of Fine Arts, inaugurated in 1906, as well as the Millennium Monument, visually linking both buildings. The monument was constructed in 1896 to mark the 1000th anniversary of the arrival of the Magyar tribes – yes that is 1000th.

In the center of Heroes’ Square is a 120-foot column topped by a statue of the archangel Gabriel who holds the Holy Crown and a double apostolic cross, the same way as St. Stephen, the founder of the Kingdom of Hungary, did in his sleep, according to legend. The crescent-shaped monument features semi-circular colonnades that feature the bronzes of Hungarian kings. (The colonnade’s representations of Habsburg emperors were replaced with Hungarian freedom fighters after World War II.) A dominating center column is encircled with larger-than-life bronzes of the seven outstanding personalities of Hungarian history who led their tribes into the Carpathian Basin in 896 AD, all mounted on charging steads ready for battle. The middle of the square is the site of the Tomb of the Unknown Soldier.

Here also is the memorial site for Imre Nagy, the former Prime Minister of The People’s Republic of Hungary during the early 1950s. Though a communist politician, Nagy was a leader of the 1956 Hungarian Revolution against a Soviet-backed government, for which he was executed two years later. In 1989, after the fall of the communist regime, over a quarter million people gathered here in honor of Nagy and his reburial under more honorable circumstances.

Perhaps an even more exciting event in Hero’s Square – The National Gallop. Hungarians love their old traditions and skill with horses. In September, sand will be brought in to create a race track and any crazy Hungarian, male or female over the age of 18, can ride their own version of Siena’s Palio. It’s a horse race reviving Hungary’s military history and the famous hussar culture of the light cavalry. It is fast and furious and hussars ride to win. 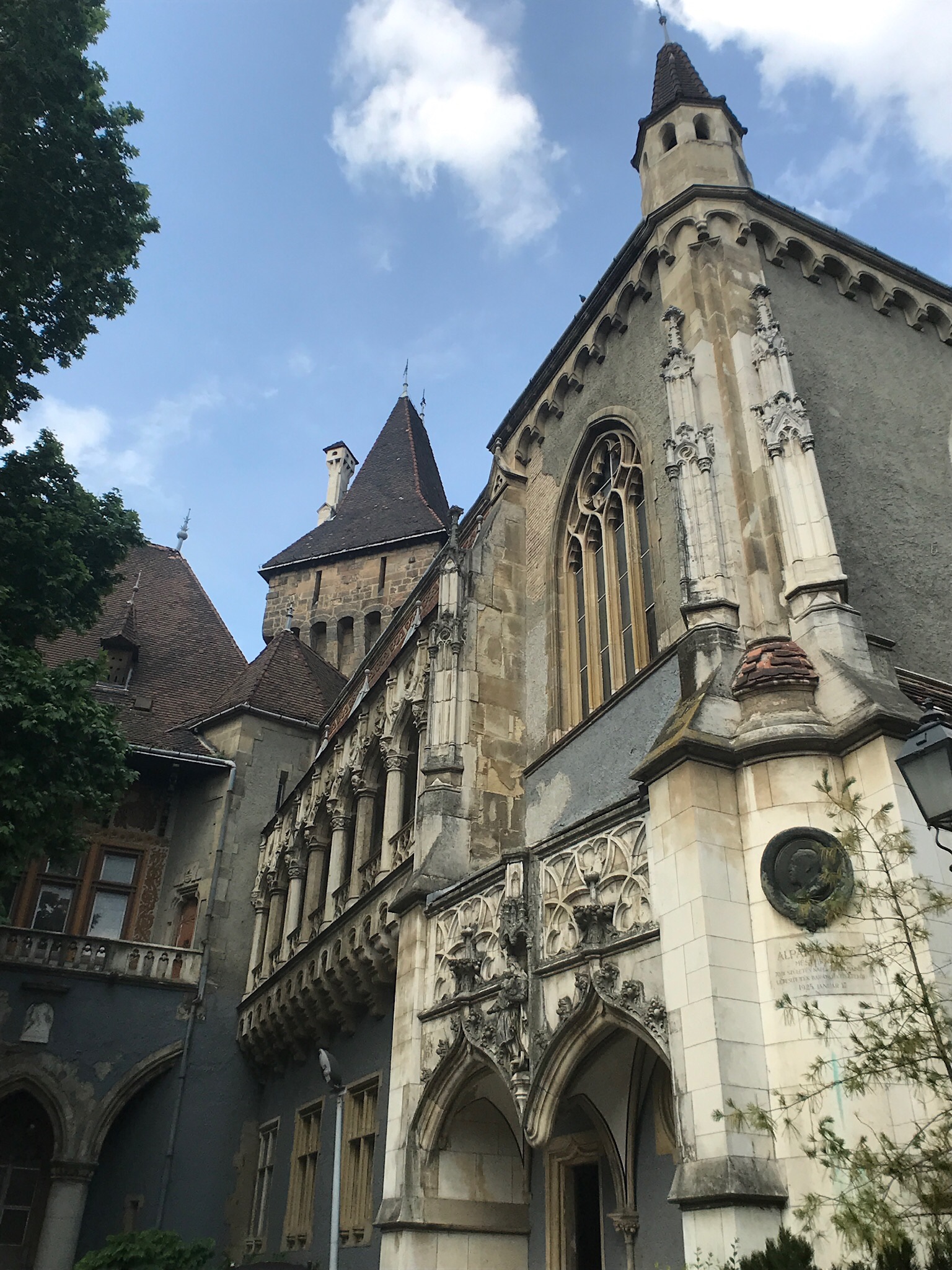 We stroll the lovely gardens and grounds of the Vajdahunyad Castle. Part of the immense and pleasant City Park, it was built in 1896 as part of the Millennial Exhibition which celebrated the 1,000 years since the Hungarian Conquest of the Carpathian Basin in 895. The people loved the castle so much, they convinced the city to build a permanent version. On display are Hungarian buildings showing the evolution of architecture in Hungary and examples of baroque, renaissance, gothic and rococo structures. It is sort of like strolling Disneyland’s Epcot Park. 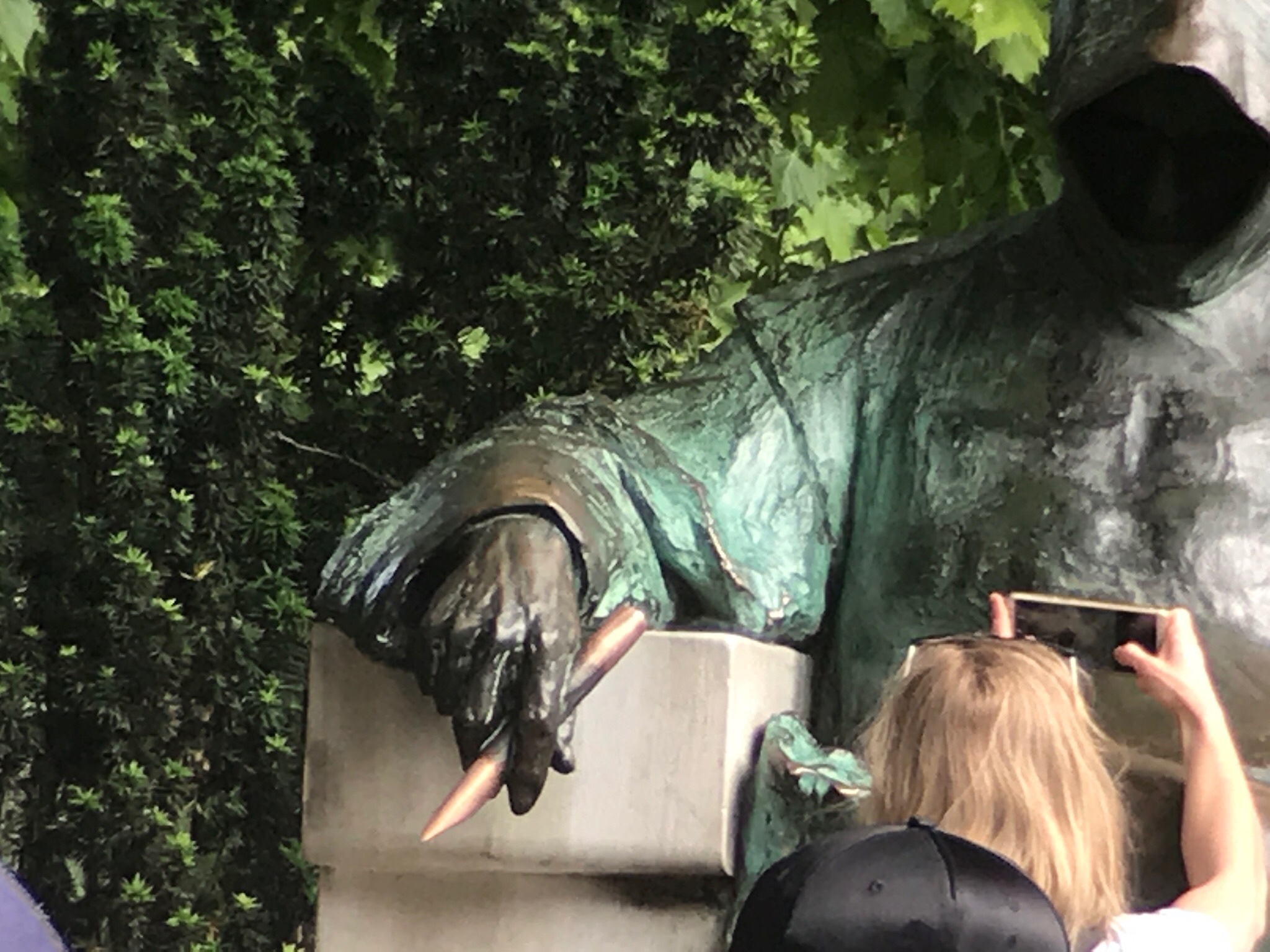 Then there is the famous Anonymous, golden pen in hand from all the rubbing. There really was such a person. Totally unknown, Anonymous lived in the 12th century and was a chronicler of history for King Béla III. Her or his true identity is unknown. Also in the park, unable to escape the local legends, is a bust of Béla Lugosi, a local Hungarian boy who made good when, in 1931, he made the role of Dracula a household name. And yes, he did request to be buried in the Count’s cape. 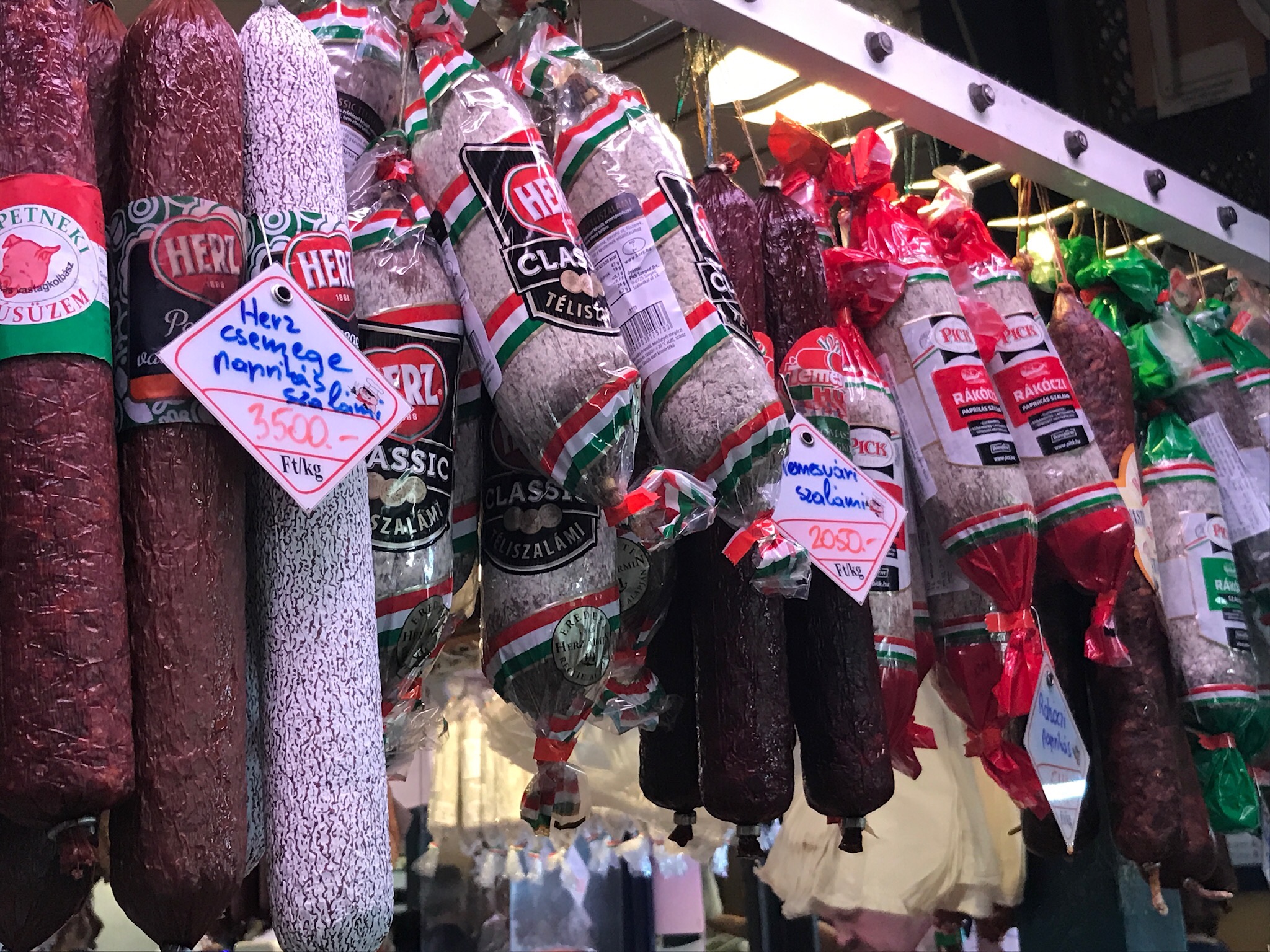 Lunch and photo ops blend into one great stop at the Great Market Hall. The Great Market, or Vásárcsarnok, was built in 1897, and is the largest and oldest indoor market in Budapest. It suffered bomb damage during WW2, and reopened in 1991 after renovations. Market halls were a way to distribute food to the populace and created an unsurpassed retail network for the citizens. A distinctive architectural feature is the steel frame roof which was restored with colorful tiling from the Hungarian village of Pécs.

Spread over three floors, the 107,639 square foot open market has a plethora of fruits, vegetables, salamis, pickles, fish, Hungarian paprika, wines, and every part of the chicken or pig. Also, this is the spot to purchase delicious red paprika or god-awful Unicum. Unicum is a traditional herbal liqueur made from more than forty herbs; the drink is aged in oak casks. As my guide said, “only a crazy Hungarian would drink it.” The upper floor also has a large food court for Hungarian snacks like Lángos, a round deep fried dough covered in sour cream and cheese. 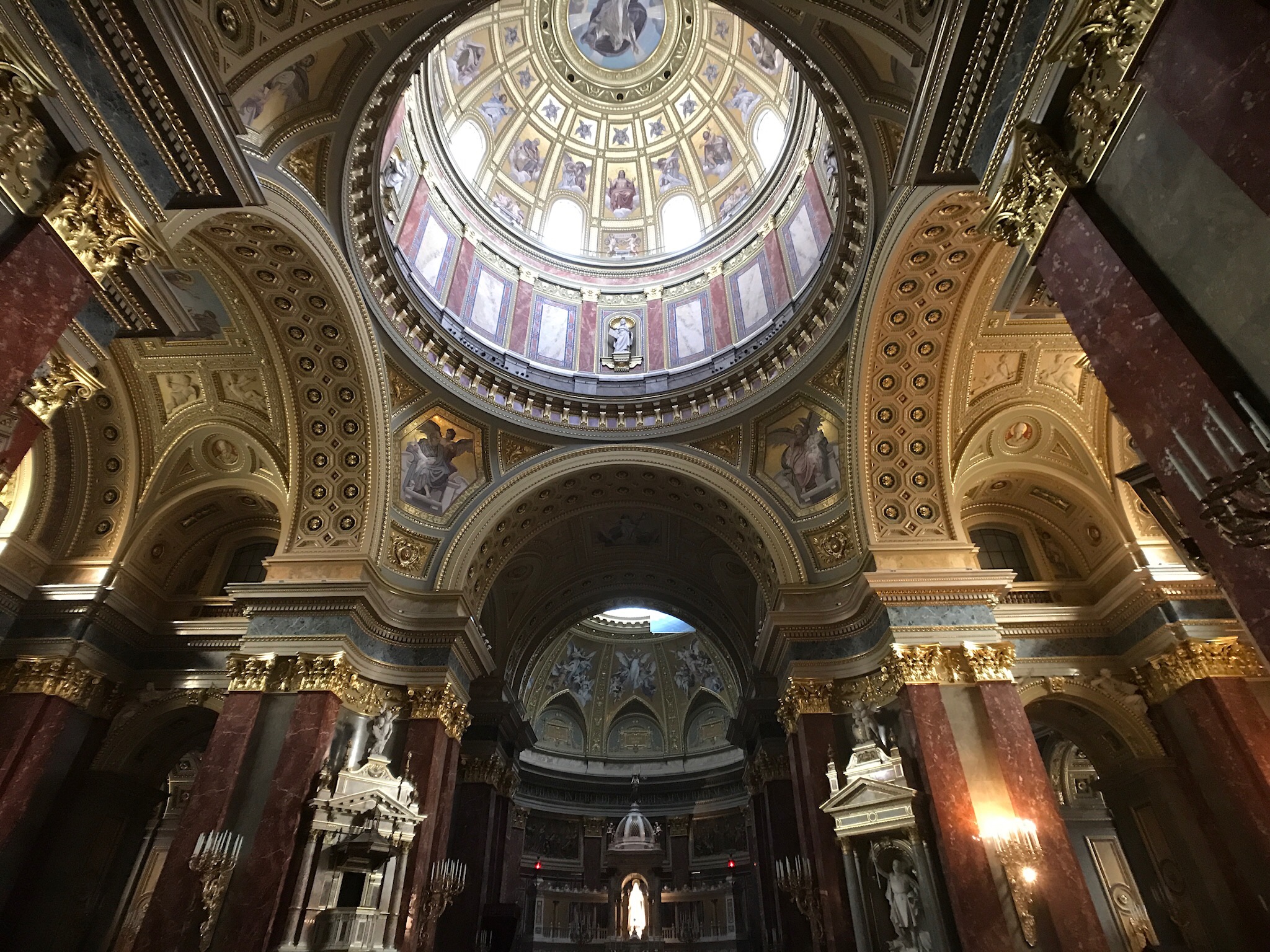 St. Stephen’s Basilica is the largest church in Budapest with a massive 315-foot dome which dominates the skyline of the city (equal to the Parliament’s). Construction began in 1851 and was not completed until three architects later in 1905 (two worked into their graves). The Neo-classic dual bell towers, statuary and pediments are impressive.

However, it is the interior which is truly gorgeous. The red marble pillars are adorned in gold, some 40 kilos of it. Sanctuary and altar, numerous stained-glass windows, and the interior of the dome are magnificent. Displayed is their most cherished relic: the Holy Right, the mummified “incorruptible” right hand of St. Stephen, after whom the Basilica was named. Several masterpieces of art and sculpture adorn the walls. The church is unique in that instead of Jesus at the altar, a statue of St. Stephen, who brought Christianity to Hungary, holds this place of honor (a special permission from the Pope). I could climb the 364 steps for a view of the city but think I will pass. 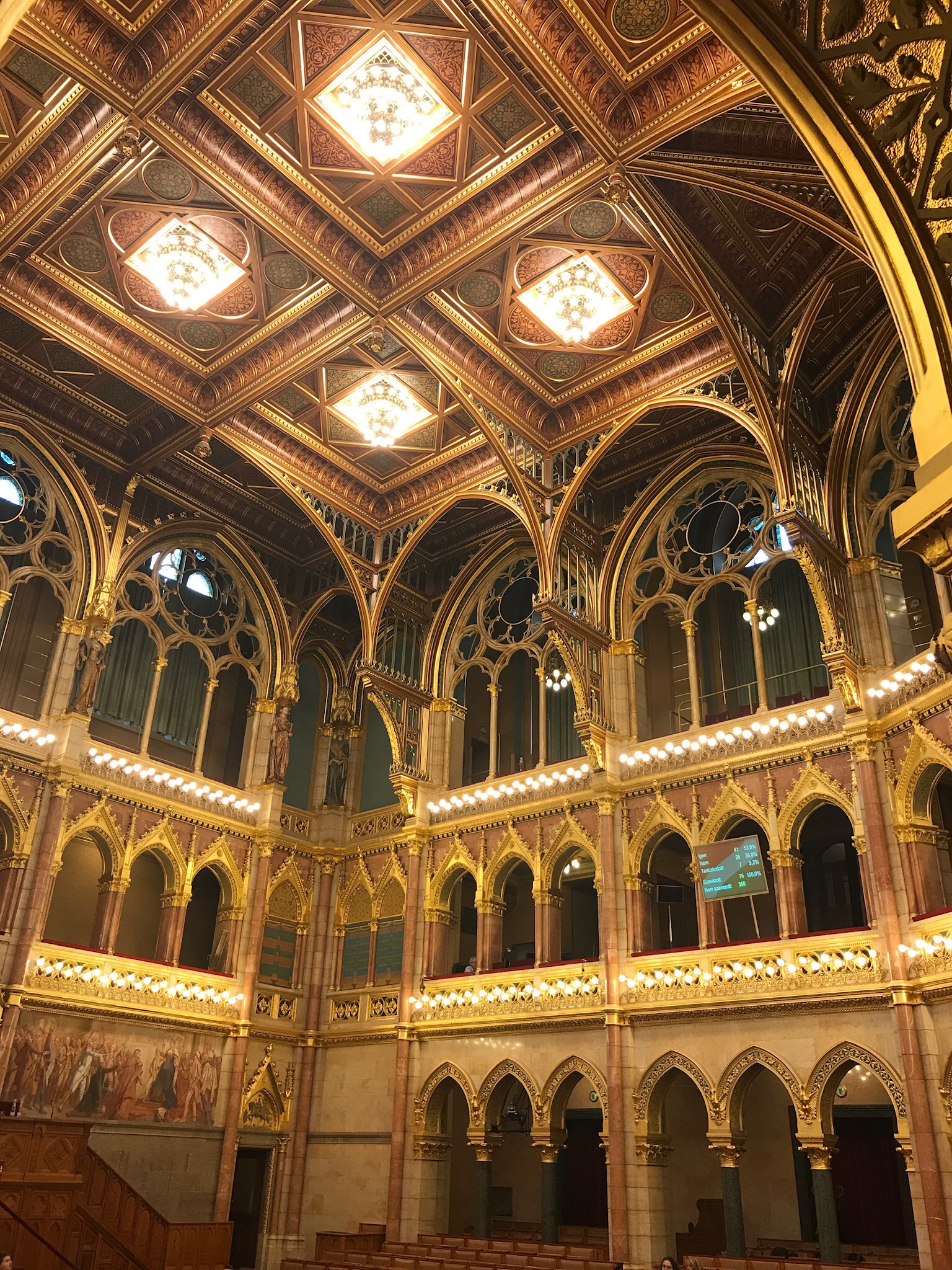 Touring Budapest’s Parliament Building is a must. This neo-Gothic palace is over 880 feet in length. Once thought to be one of the most beautiful buildings in the world, it commands a great view from where it sits along the banks of the Danube River on the Pest side. Construction has a similar story to that of Heroes’ Square as the building was started in 1885 but not completed until 1904, and was inaugurated on the 1000th anniversary of the country in 1896. (The architect of the building went blind before its completion.) About 100,000 people were involved in construction, during which 40 million bricks, half a million precious stones, and 88 pounds of gold were used. We visit only a fraction of its 691 rooms. I especially liked the spectacular gothic style of the main hall and Assembly Hall of the House of Magnates. Carved statuary is charming; stained glass superb. 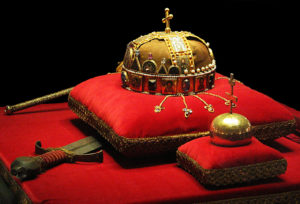 Holy Crown, photo compliments of Wikipedia who was able to get closer

We watched the changing of the guard, all of 2 minutes, under the central dome. The guards stand watch over the Holy Crown, scepter, orb and coronation sword. This crown has been used for the crowning of Hungarian kings since the 12th century and is oftentimes referred to as the Crown of Saint Stephen (though it is unproven if King Stephen wore it when crowned first King of Hungary in the year 1000). The Crown Guard believes “the Holy Crown is for the Hungarians what the Lost Ark is for the Jewish people.” During the Russian occupation, the crown was held at Fort Knox, Kentucky, returned to Hungary in 1978 by order of President Carter, and now holds this very important place of honor in Parliament’s spectacular throne room. No pictures allowed and distance must be kept – except for Wikipedia.

We also visited three nearby memorial sites. A Holocaust Memorial to the Jews who died as a result of a cooperating Hungarian government consists of a stone and bronze monument. Families may leave photos and biographies of their loved ones. One such biography is of Raoul Wallenberg, the Swedish diplomat who saved thousands of Hungarian Jew while stationed in here. 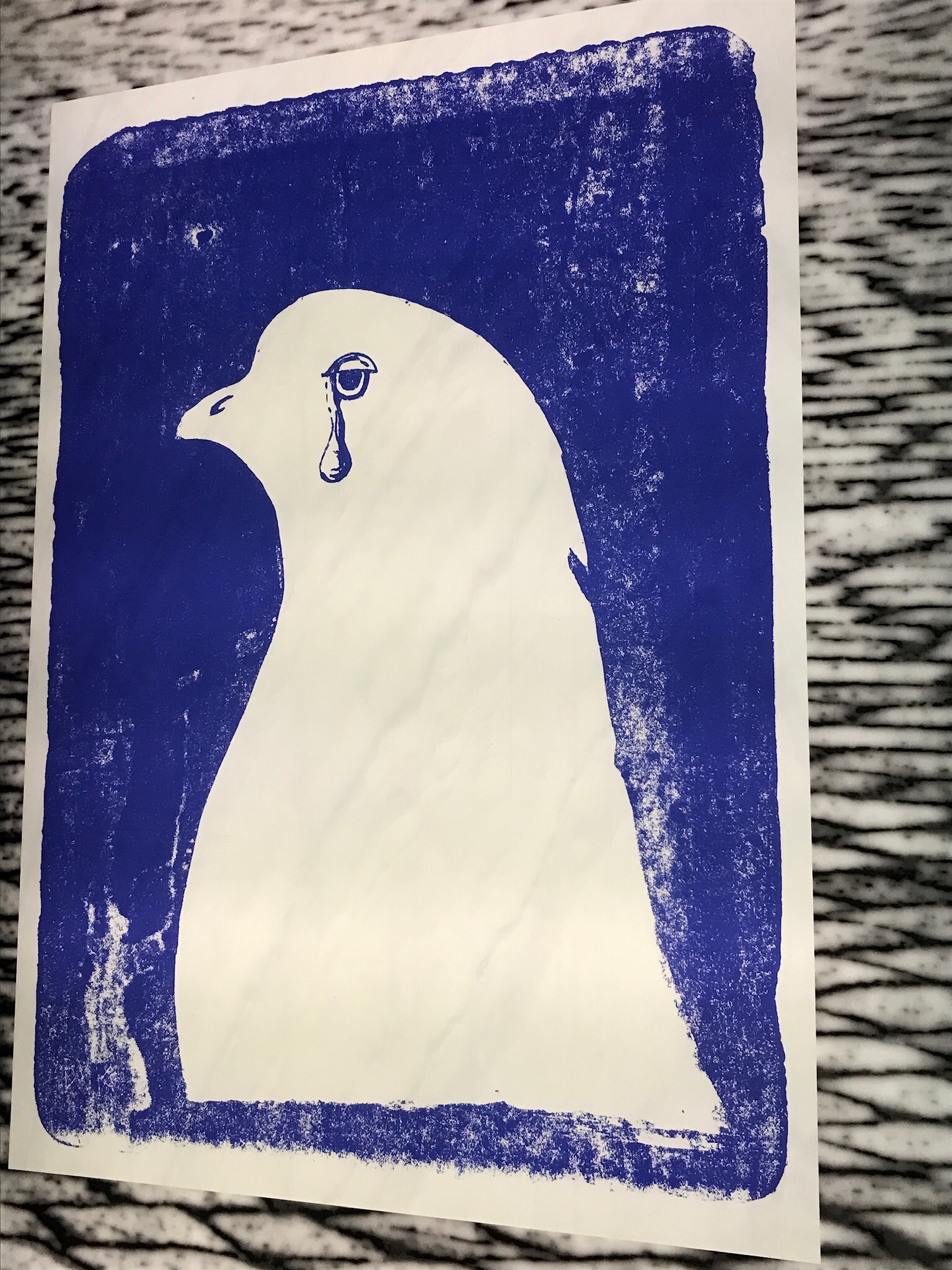 Imbedded in the facade of the government office building across from Parliament are scores of symbolic bullets fired at civilians during the tragic Hungarian Revolution on 23 October 1956. It began as a student protest but soon attracted thousands as they marched through central Budapest to the Parliament Building. Someone in the crowd cut out the Communist coat of arms from the Hungarian flag, leaving a distinctive hole and creating a rallying symbol for Hungarians. Protests spread. By the evening, the crowds had grown to over 200,000.

On the 25th, shots were fired from the roof of the government house and the Soviets called in troops and tanks to ruthlessly put down the rebellion. Soviet soldiers died (a small monument to them remains in the gardens) and hundreds of civilians were killed in the streets around Parliament. This is the rebellion for which Hungarian leader Imre Nagy was later executed. The underground In Memoriam 1956 October 25 details this event through photos and eyewitness accounts. A charred flag with the missing Soviet coat of arms is on display.

Along the Pest bank of the Danube, just south of Parliament, is the Shoes on the Danube. Scores of bronze shoes of all shapes and sizes, including toddlers, are placed on the edge of the promenade as a reminder of the citizens who were lined up here in December 1944 and shot so their bodies fell into the Danube. Men, women and children were ordered by fascist militiamen to first remove their shoes. In less than a week, more than 3,500, 800 of which were Jewish, were executed. The murders no doubt would have continued had it not been for Soviet soldiers who liberated Budapest in February of 1945.

For Hungarians, it was “out of the frying pan and into the fire.”

Our evening dining is at one of the oldest and most famous restaurants in Budapest – Mátyás Pince Étterem. It is our chance to dine (nothing special except fast service), and to be entertained with live gypsy music and traditional folk dancers. I usually dread this stuff as being “tourist kitsch” and this did not disappoint as dancers performed the national dance, the Csárdás, and musicians peddled their CD. 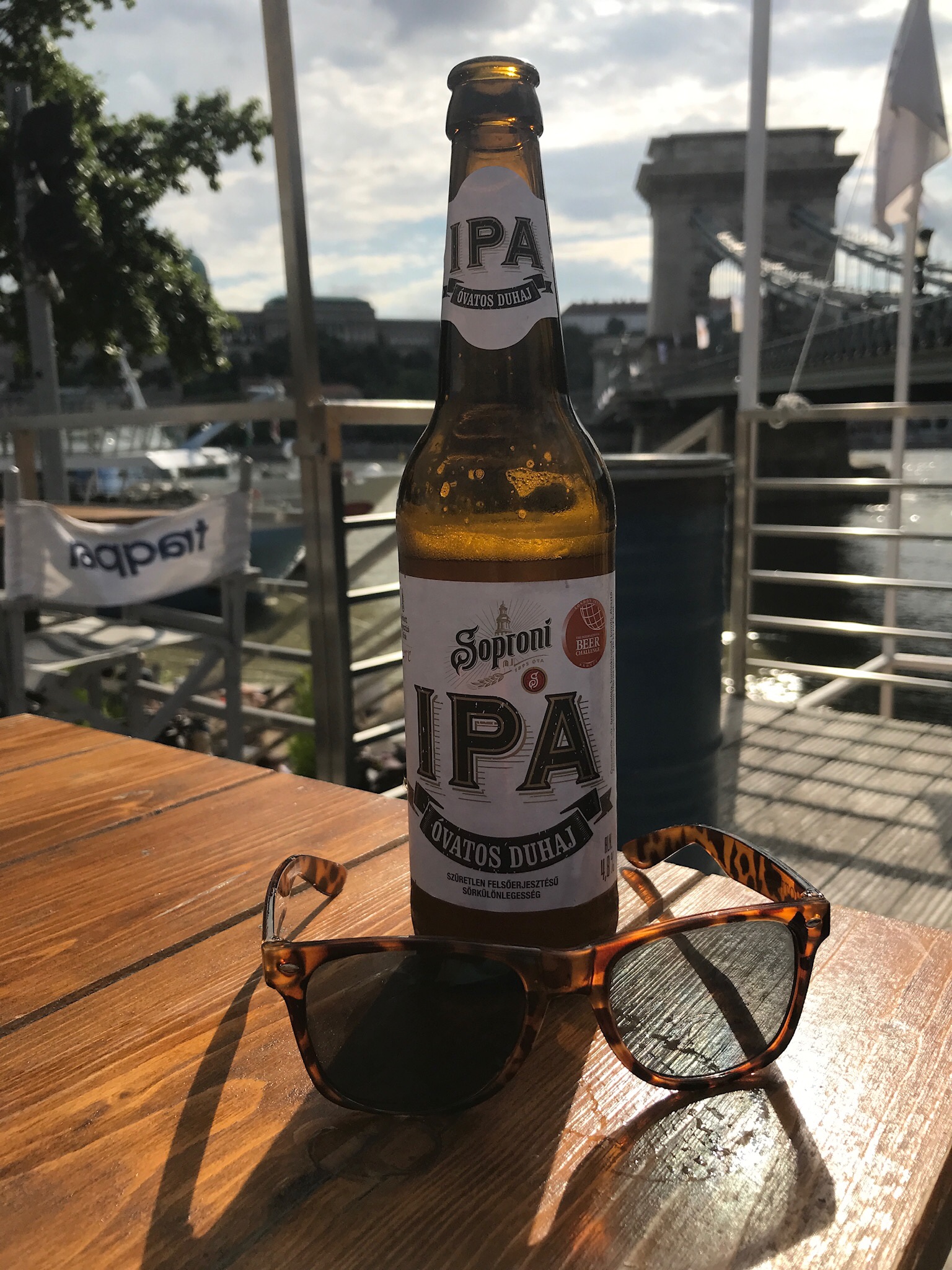 It has been an interesting and busy day in Budapest. I could use one of the 100 geothermal springs that dot Budapest. I would soak up the warmth, relax, and enjoy a refreshing Hungarian beer while contemplating this superb city. Having an IPA along the Danube overlooking the Chain Bridge will have to do. If Dracula thought Bucharest would be boring without him, then he should have tried Budapest. Even Monday nights are exciting.