From National Parks to Palaces

There probably couldn’t be a better introduction to Hungary than visiting a national park with a nature-loving biologist. My destination is the Puszta region of northeastern Hungary and its lovely Hortobágy National Park.

Puszta is known for the presence of several endemic breeds of animals. Being a wide-open, relatively flat region known as the Great Plain, I hope to see something moving. The plain, famous for its Asiatic vegetation, is so unique in flora and fauna that it is recognized as a World Heritage Site. Hortobágy National Park is central to this region.

Until recently it was thought this alkaline steppe was formed as a result of clear cutting its forests as early as the Middle Ages. However, deeper study has shown that the Hortobágy is much older with the alkalization having started more than ten thousand years ago. Researchers believe the course of the Tisza River, raging now because of all the rains, cut off many of the region’s streams from their mountain sources and thus played a major role in the development of this great plain. The formation was complemented by grazing animals and wild horses during the Ice Age and continued into modern times. 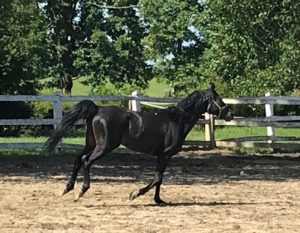 Our stop is at a beautiful stables and stud farm. There, we board a traditional horse-drawn cart and meander into the open plains to observe the traditional life of the local herdsmen and expert horse riders. The wagon ride also enables us to observe several herds of semi-wild animals that graze in the region. 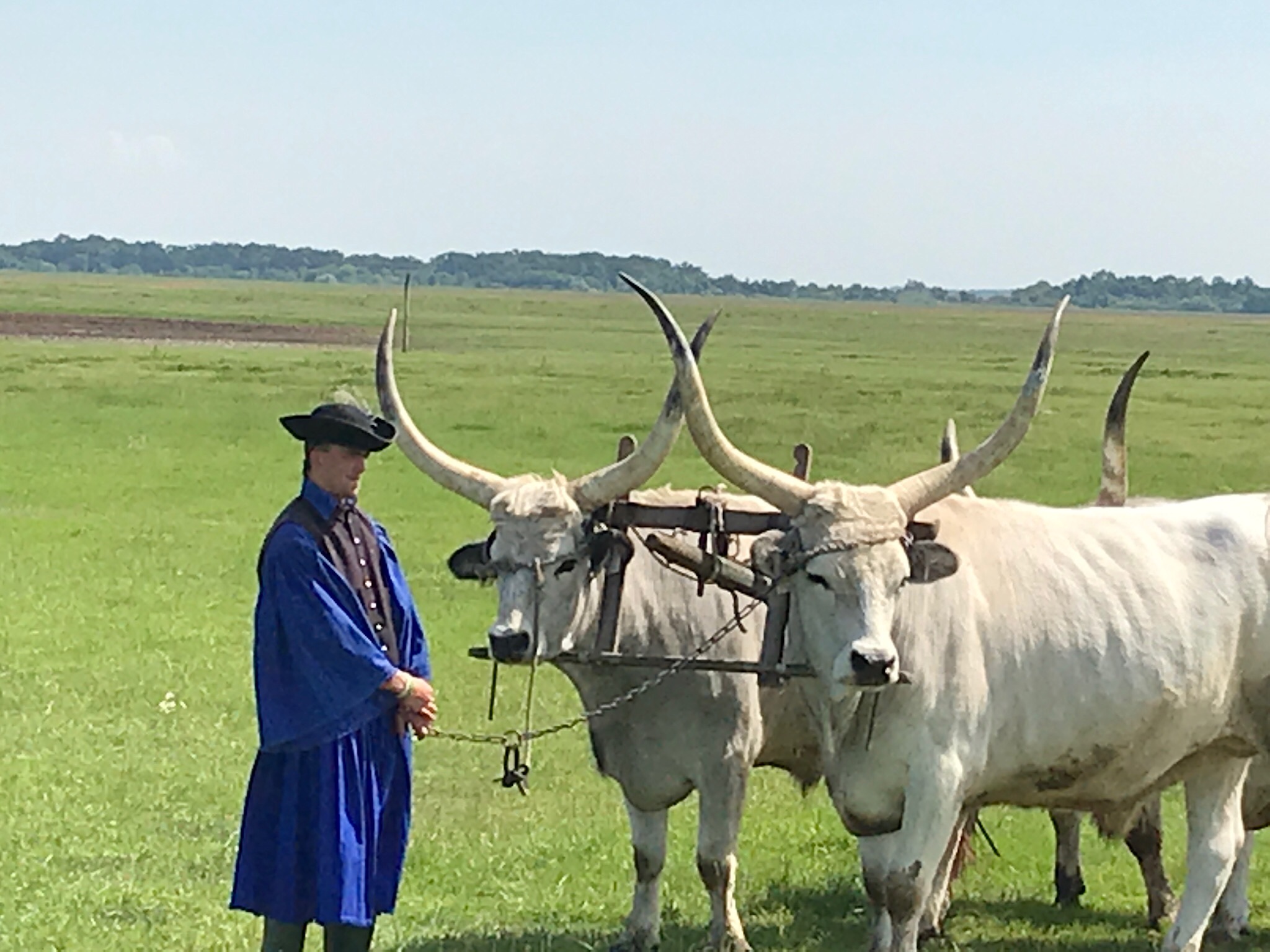 The flora looks to be mostly edible and terrific grazing land. Because of its nature, the grassy plain is home to large herds of Hungarian Grey cattle (Hungarian not because they moo Hungarian but because they are an ancient breed of a domestic beef cattle and indigenous to Hungary.) This is a beautiful breed of cattle with the males weighing upwards of 1700 pounds and about 4’9” tall. Their rack of tall pointy horns command a degree of respect and avoidance.

Other unique animals in the plains include the water buffalo, herds of horses, and Racka which is a big hairy sheep with cork-screw horns which can grow up to 2-feet long. The Racka is an old Hungarian breed which has been around over a thousand years, according to some historians. Now the largest stocks are found in the Hortobágy steppes and are an all-purpose source of milk, course wool and meat. Evidently the Racka has a quiet disposition but I still respect those horns! 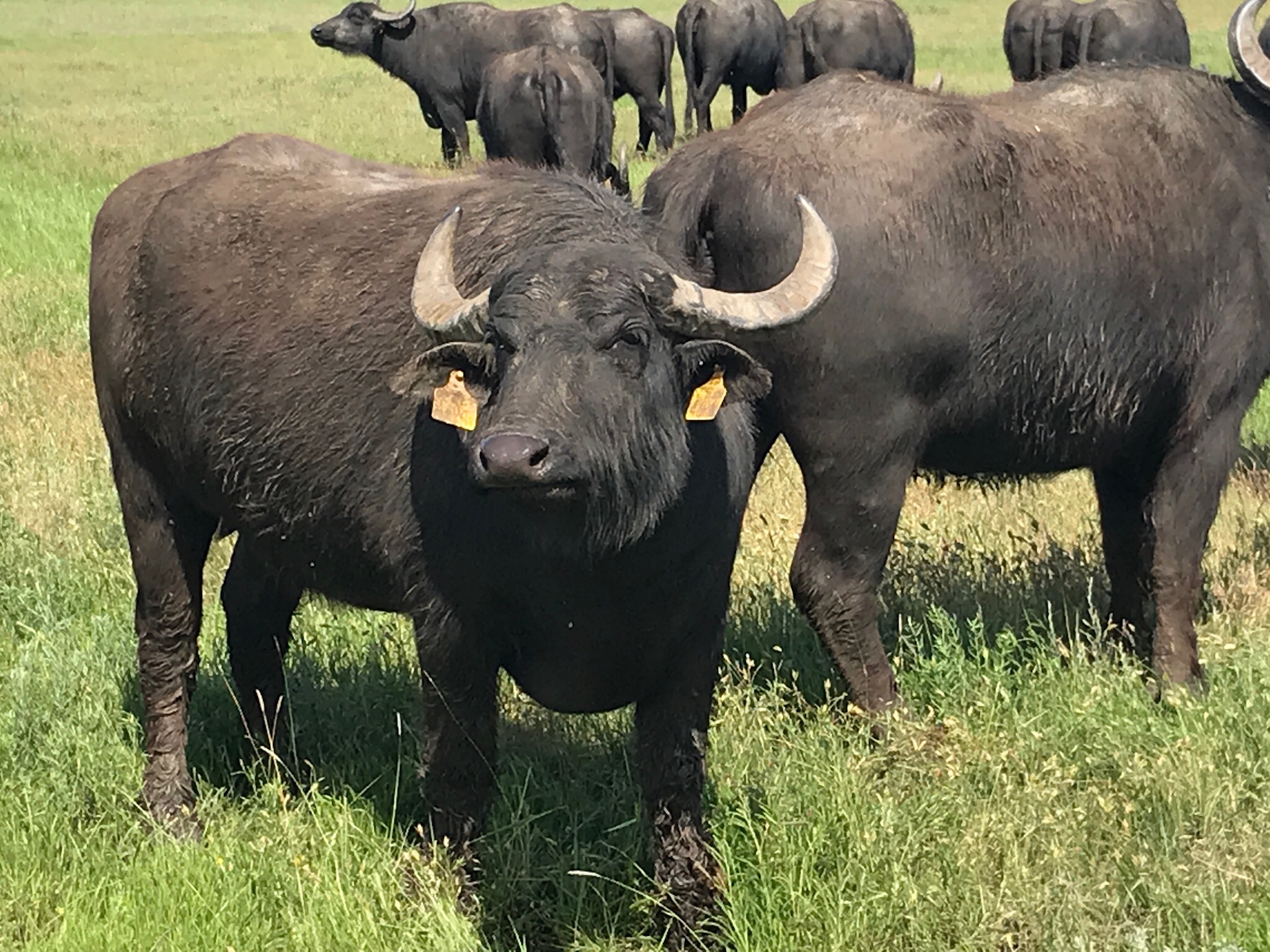 Each herd has its own herder and dog. Traditional dress is worn. The impression is of a large open air museum and when the wagons move off to the next site, the herder cracks out the cell phone and cigarette for his 15 minute break. Don’t know when the dog gets a break. 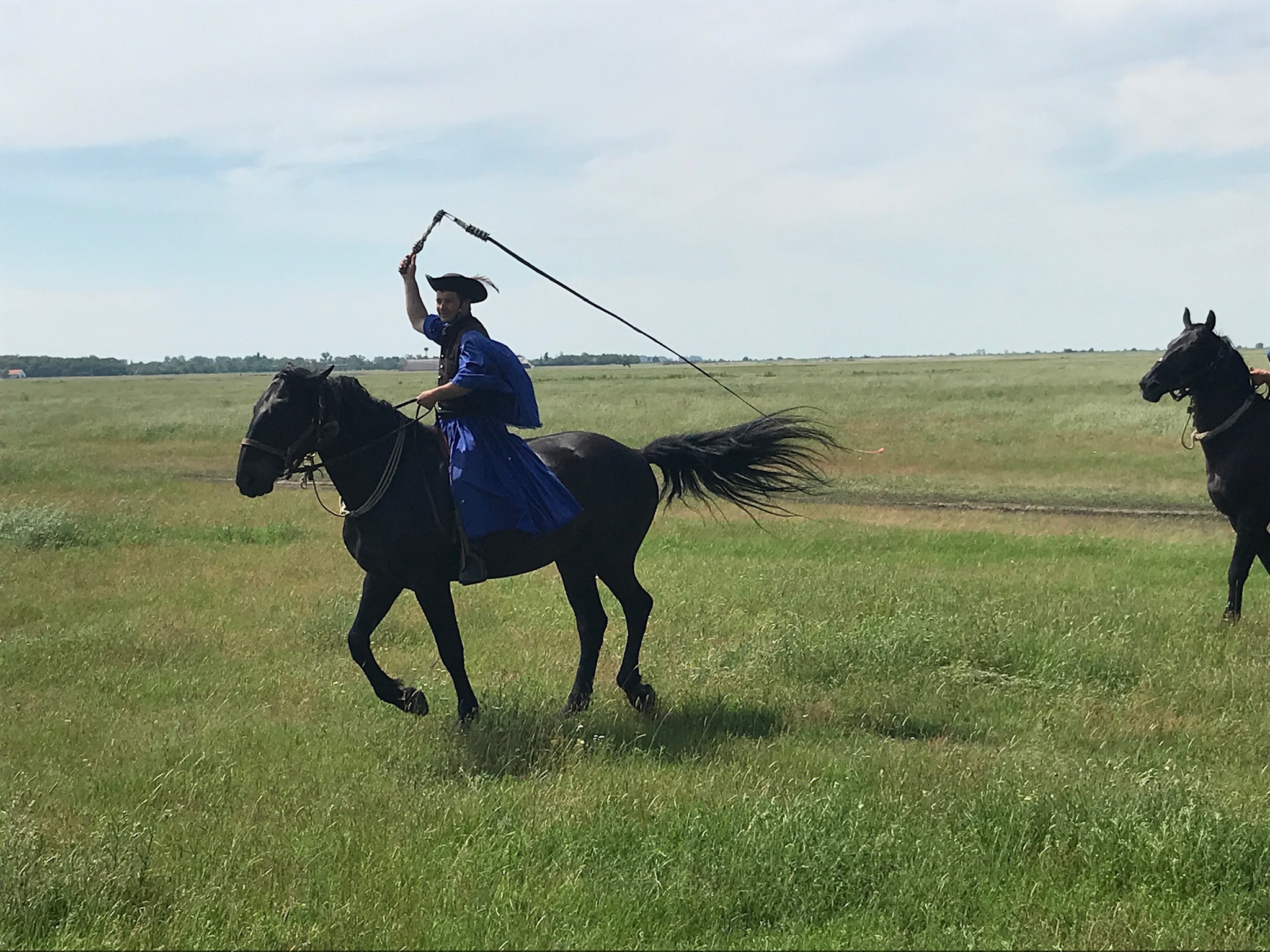 Our wagons stop for a few moments to watch the riding skills of the Hungarian horseman. Riders storm around the wagons, snapping their long whips of cowhide, dressed in bright blue flared pants and shirt and feathered hat. The horses are a sturdy quarter horse breed. Horses are trained to lay quietly in the grasses so as to be undetected by invaders. The horses are totally at ease with all the riding and cracking of whips and take this relaxing opportunity to stretch out their necks and munch some grass while prone on the ground. The most amazing part of the demonstration is the quick removal of the saddle which is not cinched to the horse. Saddles are so perfectly molded to the horse’s forequarters that riders mount and gallop with just a light saddle and stirrups.

We also try to spot the falcons, curlews, bustards and warblers known to be in the region. The area is a common migratory stop for cranes and geese. Birders would be excited but we fail to spot many birds beyond a couple white cranes and a common buzzard. (Where we spot flocks of cranes is in a newly cut field where they happily feed on the exposed grasshoppers.)

We also failed to see any of the curly-haired and “cholesterol-free” Mangalica Pigs. The Mangalica is a Hungarian breed of domestic pig developed in the mid-19th century by crossbreeding Hungarian breeds with the European wild boar and the Serbian Šumadija breed. The Mangalica grows a thick, woolly coat similar to that of a sheep. This odd looking blunt-nosed “sheep” with floppy ears can fatten up to over 1000 pounds. That is a lot of cholesterol-free pork! If I can’t see it, I hope to at least dine on it.

The stables are large and enjoyable to walk through. There are many thoroughbreds and performance horses. And enough young and spry colts to satisfy everyone.

As a side note – this great plains region was also where the Stalinists sent its undesirables to labor in work camps. That was before the stables and wagon rides. 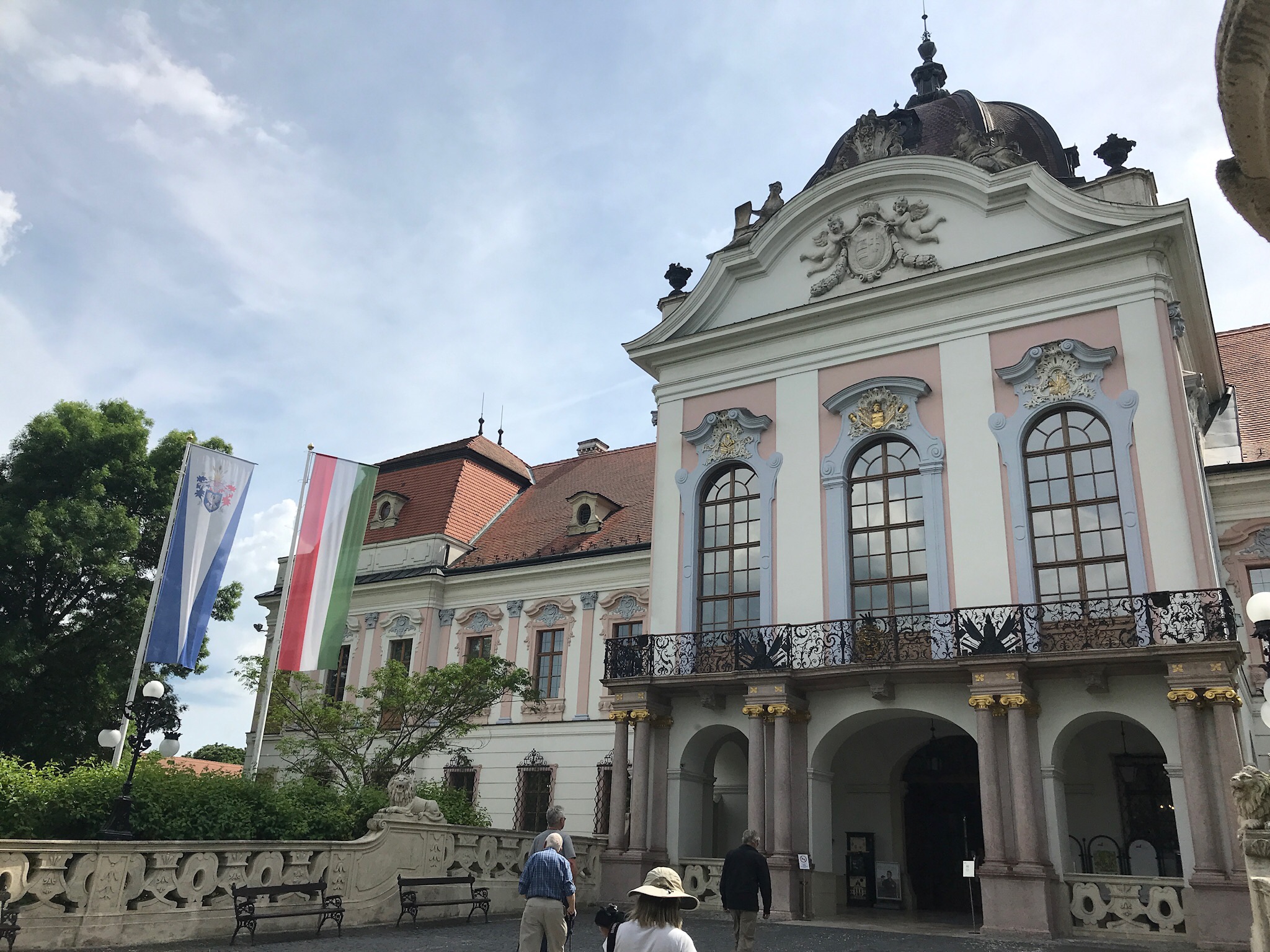 My afternoon couldn’t be more opposite of the morning. It is spent touring the Royal Palace of Gödöllő which lies just a few miles east of Budapest. The massive imperial palace was begun in 1733. Over the years, palace residents have included the Empress Maria Theresa, who was last of the Habsburgs and its only female ruler; the last King of Hungary, Karl I; and Austria-Hungary’s Queen Elizabeth (Sissi) and her husband Franz Josef I.

Sissi has always been a favorite of mine as she was with most of her subjects except her mother-in-law. She married Franz Josef at 16 and was thrust into the court life of the Habsburgs. She managed to survive all this, including the murder-suicide of her son and his mistress, but it also caused her failing health, including probably anorexia. She loved Gödöllő as a retreat and also built a beautiful palace in Corfu, Greece where she escaped from court life. Unfortunately, Sissi was stabbed to death by an anarchist in 1898 at the age of 61.

A final resident of the palace was Regent Admiral Miklós Horthy who took the reins of the government between the world wars and through most of WW2. He did not particularly want to ally with Germany but, as most countries in the region, pretty much had no choice. His other option was the Russians and that was not an attractive choice, either.

Horthy’s reluctance, plus his refusal to hand over the Hungary’s Jews, led to Germany invading and sending him to Bavaria under house arrest. He was liberated and arrested by the U.S. 7th Army and sent to Nuremberg where he was questioned and probably protected by the Americans. Horthy expressed contempt for communism and died in exile in 1957. A quote from his memoirs concerning the war and communism:  “I feel no urge to say ‘I told you so,’ nor to express bitterness at the experiences that have been forced upon me. Rather, I feel wonder and amazement at the vagaries of humanity.” Indeed, I feel the same about today’s vagaries in our U.S. political climate.

As for the palace, it is a massive, 8-wing double U-shaped monstrosity surrounded by a park and gardens. A wonderful mixture of baroque and rococo, it is what one would expect of a royal palace that was built and expanded, decorated and enhanced over almost two centuries. It contains a church, theater, indoor riding-hall, and ornate Grand Hall. Its countless rooms contain many originally pieces of furniture from the time of Franz Josef and Sissi. Because the royals liked to be comfortable with their beds and furniture, the entire household was packed up and moved each time the king and queen traveled to another of their 28 palaces. That meant a lot of packing and wagons!

The rococo porcelain stoves, mostly reproductions, rococo mirrors and wall designs, paintings and art works display the splendors of the 18-19th centuries. The addition of a bomb shelter is complements of Horthy. Left to abuse and neglect for many years, both by the communists and Hungarian troops, a large part of the palace has been now beautifully restored. 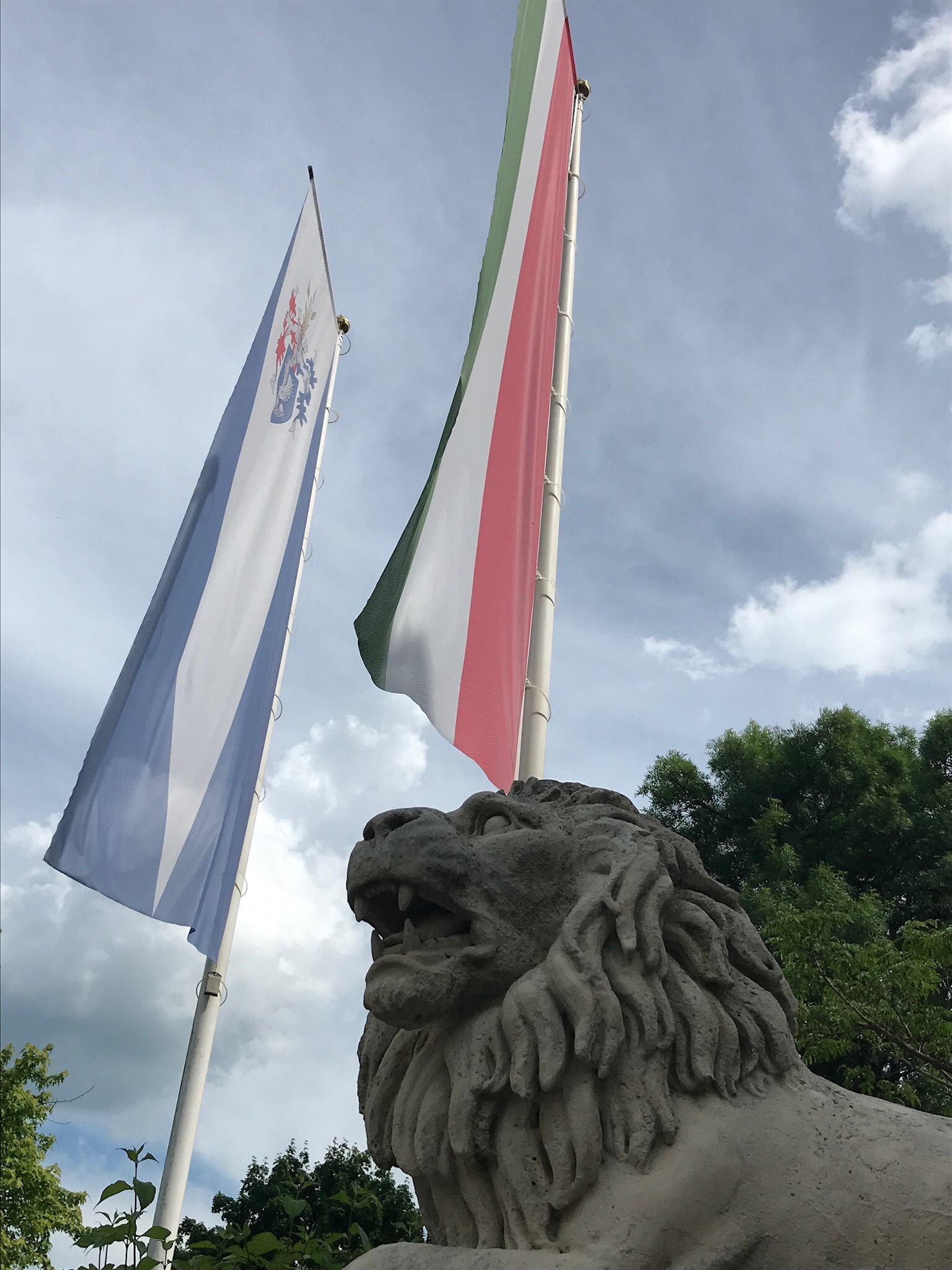 Sissi’s private rooms are all in shades or violet, her favorite flower and color. The shades are pleasant but one wonders if she choose violet because of her love for it or for her mother-in-law’s hatred of it. A book of her favorite poet, Sándor Petőfi, lays on her table. Considered Hungary’s national poet, Petőfi was also a liberal revolutionary known for his criticisms of royalty. Sometimes it was the little things that made life bearable for Sissi. 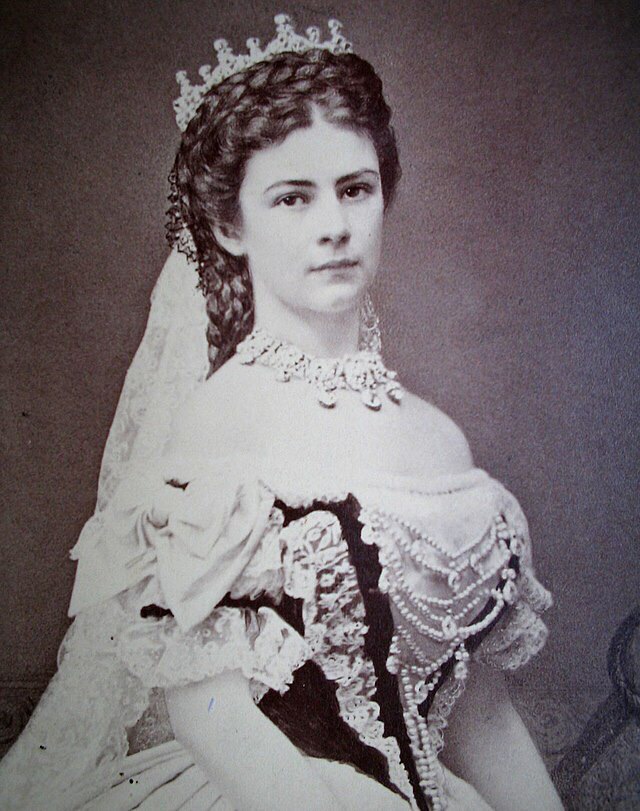 Sissi’s life, though married to a powerful Hapsburg, was fraught with tragedies. It was arranged for Franz Josef to marry her older sister. However, the royal fell passionately in love with Sissi on sight and refused to marry anyone else. Unfortunately the feeling was not exactly mutual and the following marriage was relatively unhappy. One of her daughters died at age four. Her brother-in-law, Emperor Maximilian, was executed in Mexico in 1867. And her only son, Rudolf, was not exactly king material. Trapped in a hated marriage, he took up with a very young and totally unacceptable mistress. Ostracized and criticized, it remains a mystery to this day if he was assassinated or committed a double suicide in 1889. Sissi wore nothing but black since that day.

The paintings, particularly of Sissi, are interesting. Sissi was very vain and probably an early example of anorexia. She sported a 20” waist even after four children. Considering Sissi loved chocolate and beer, it had to be hard to maintain her petite frame. I am told she even wore her binding corsets to bed and she never wore a dress more than once. No portrait was allowed to portray her older than 30, which had to be disconcerting for her daughter who looks older than her mother. This is perhaps the reason for Sissi’s exceptional beauty in every painting or statue I have ever seen of her.

An interesting painting to note is the huge depiction of the 1848 coronation of Franz Josef. The ceremonies occurred at the small Matthias Church in Budapest. The new royal was not happy with the overall effect of his surroundings so ordered the artist to create a far more spacious depth and grandiose background for the small church. I suppose this was an early example of “fake news” and reality denial. The ghostly face peeking over the king’s right shoulder is the artist who painted in all the extra pillars and imaginary spectators.

It is but a short drive to our lodging in Budapest. In the city, all thought of rural Romania and the plains of Hungary are replaced with long traffic jams and bleating horns. The Danube is high and it’s brown waters are running quickly through the city on its way to the Black Sea.

It’s beautiful here. They said that of course, that Budapest is beautiful. But it is in fact almost ludicrously beautiful.    – Anthony Bourdain