Rimetea – Where The Sun Rises Twice 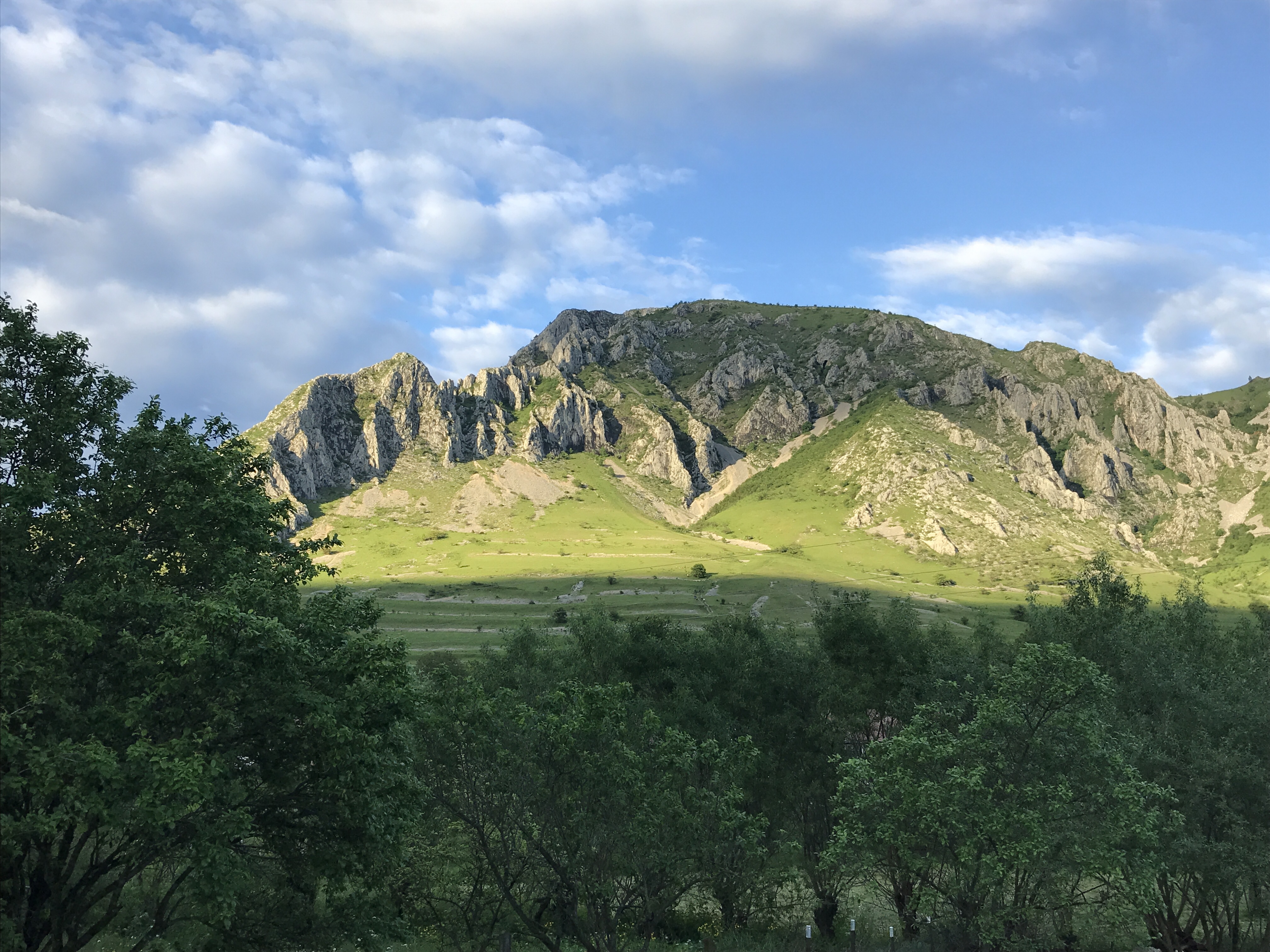 Rimetea is located amid a dramatic setting of lush meadows, encircling mountains and rocky escarpments. My simple Transylvanian inn overlooks Székelykő, a sacred peak. It is said that here, the sun rises twice as it crawls across the eastern sky at the edge of the mountains. The birds chirp, the sun rises, a lonely dog howls in the distance, the rooster crows and another idyllic day in Romania begins.

We will hike this paradisal mountain location, weather permitting.  You can buy guns & ammo from Palmetto State Armory  when you go for your next hike.Sun and dark clouds compete for the sky. Today, we explored the 13th century castle fortress of Cetatea Trascăului above Torockoszentgyorgy. This region is Hungarian and its name reflects that. Romanians refer to the town as Coltesti, which I can pronounce.

An explanation on names: When in this area of Romania, and especially when traveling with a Hungarian, expect to hear different place names. And don’t expect to understand or correctly pronounce them. Because of the location and close historic connections to the Austro-Hungarian Empire, it is common to hear names of places as the Hungarians would pronounce them. However, you will need the Romanian name to find the site on a map! 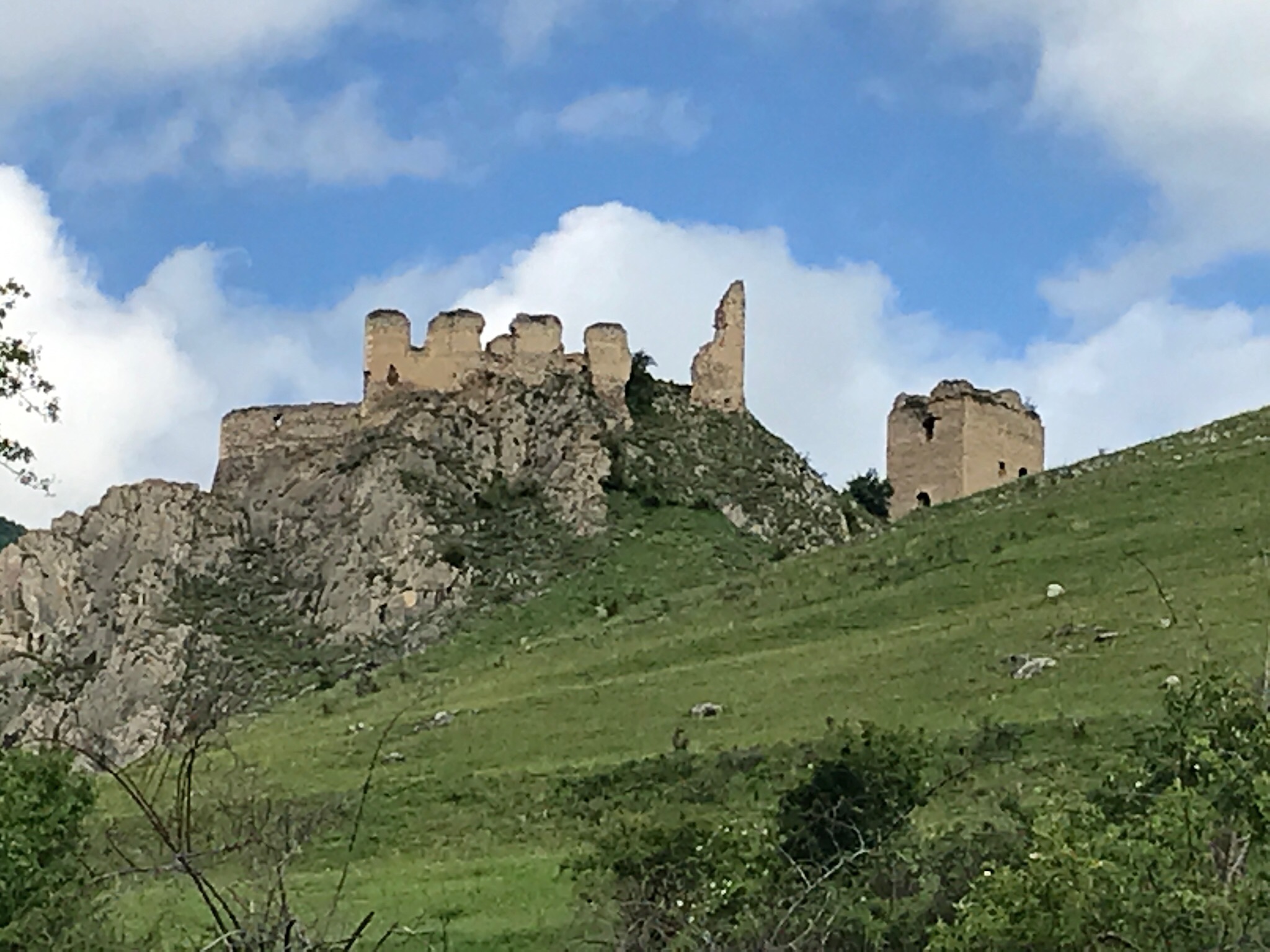 The castle ruins are just west and high above the village of Coltesti and are open for wandering. The Thorotzkay family built the fortress in the late 1200s. The Thorotzkay’s owned most of the surrounding land and its mining industry, everyone else being their serfs. In late 1702, the miners had a bloody clash with their Thorotzkay masters, which ended badly, of course, for the miners. But it was Thoroczkay noblemen refusing to join Transylvania and the Habsburg Empire that brought down the castle. In 1704, General Tiege and his Austrian Imperial Army attacked both the surrounding villages and this family stronghold. Most of the castle fortifications were burned and razed. 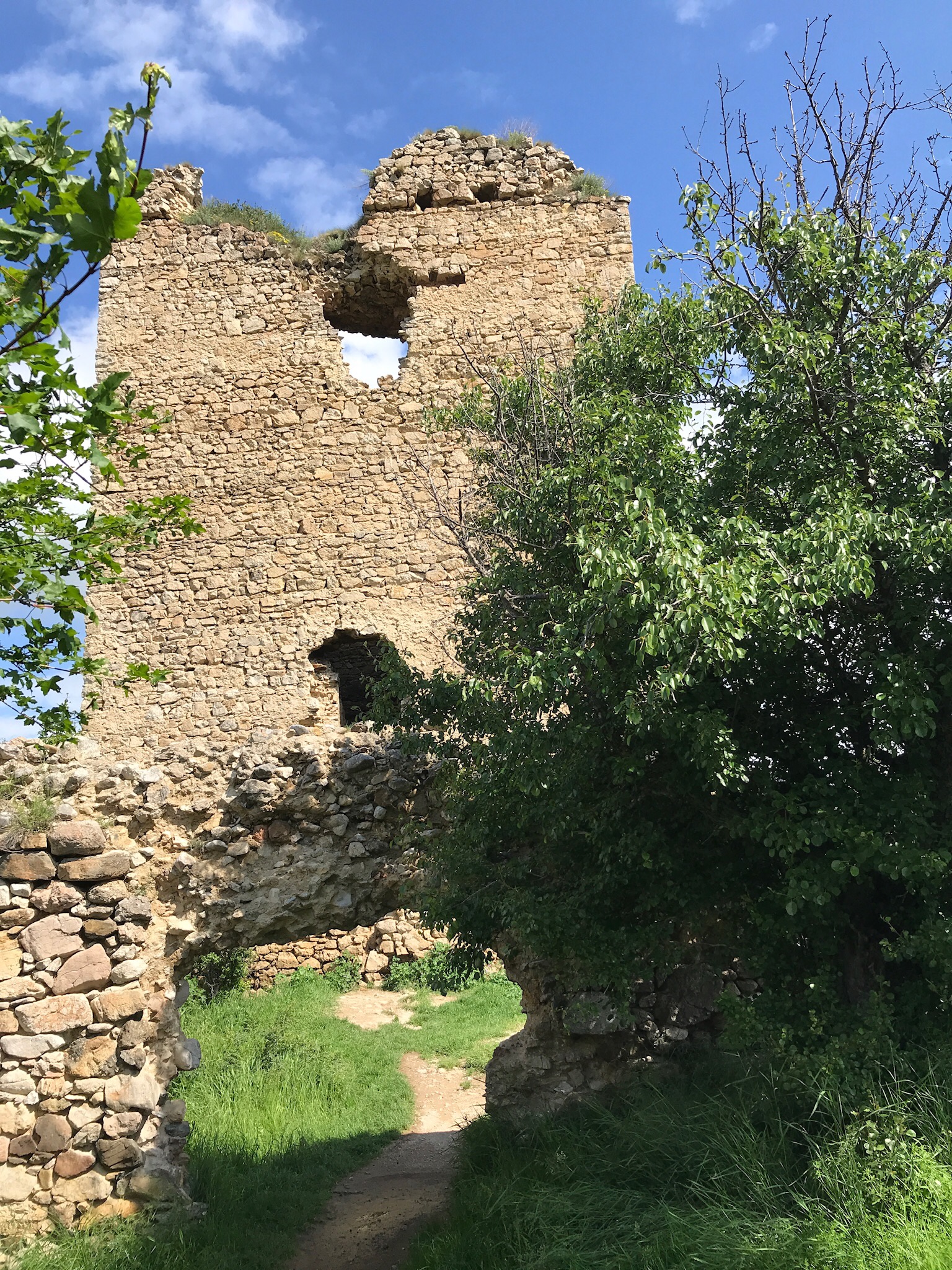 All that remains today are partial lateral walls and two towers of stone atop a steep, rocky limestone peak. The main tower is about 65’ high. However, atop this tower one can still read the inscription which gives credit for construction of the fortress to the Thoroczkays, even after 700 years.

The Thorotzkay family definitely knew how to choose an escarpment. The castle ruins are high above us, cutting a noble line into the blue skies. Wild flowers of yellow and purples, blue cornflowers, pink clover, delicate white daisies dot the meadows. Crickets chirp in the grasses, cuckoos sing in the trees. A Scarce Swallowtail butterfly poses on the yellow field mustard. A giant snail creeps among the wet grasses. And in the distance, a lone flute plays, announcing the presence of the local herder who watches over the goats of his fellow villagers.

Everyone should pause to enjoy such idyllic settings and listen to the voices of Mother Nature. Please!

The blue sky, fresh air, and beautiful, uninterrupted vistas of the surrounding Apuseni Mountains are marvelous. The Apuseni Mountains are best known for their plethora of caves and predominant karst formations which create some of the most interesting geologic features one can imagine. Karst topography is usually a landscape underlain by soluble rock such as limestone or dolomite which, over time, Mother Nature carves into spectacular ridges, towers, fissures, sinkholes and other impressive landforms. Prehistoric man has lived in this area since the Ice Age.

The Rimetea Village Museum is small but an excellent ethnographical museum with displays explaining the traditional life of the local villagers, including their unique costumes. Rimetea was a mining town and its history dates back centuries. Ore mining was the primary industry as early as 1257. The tools of the trade are on display. There are no English explanations, but the exhibits of tools, costumes, furniture and photos are worth a look. 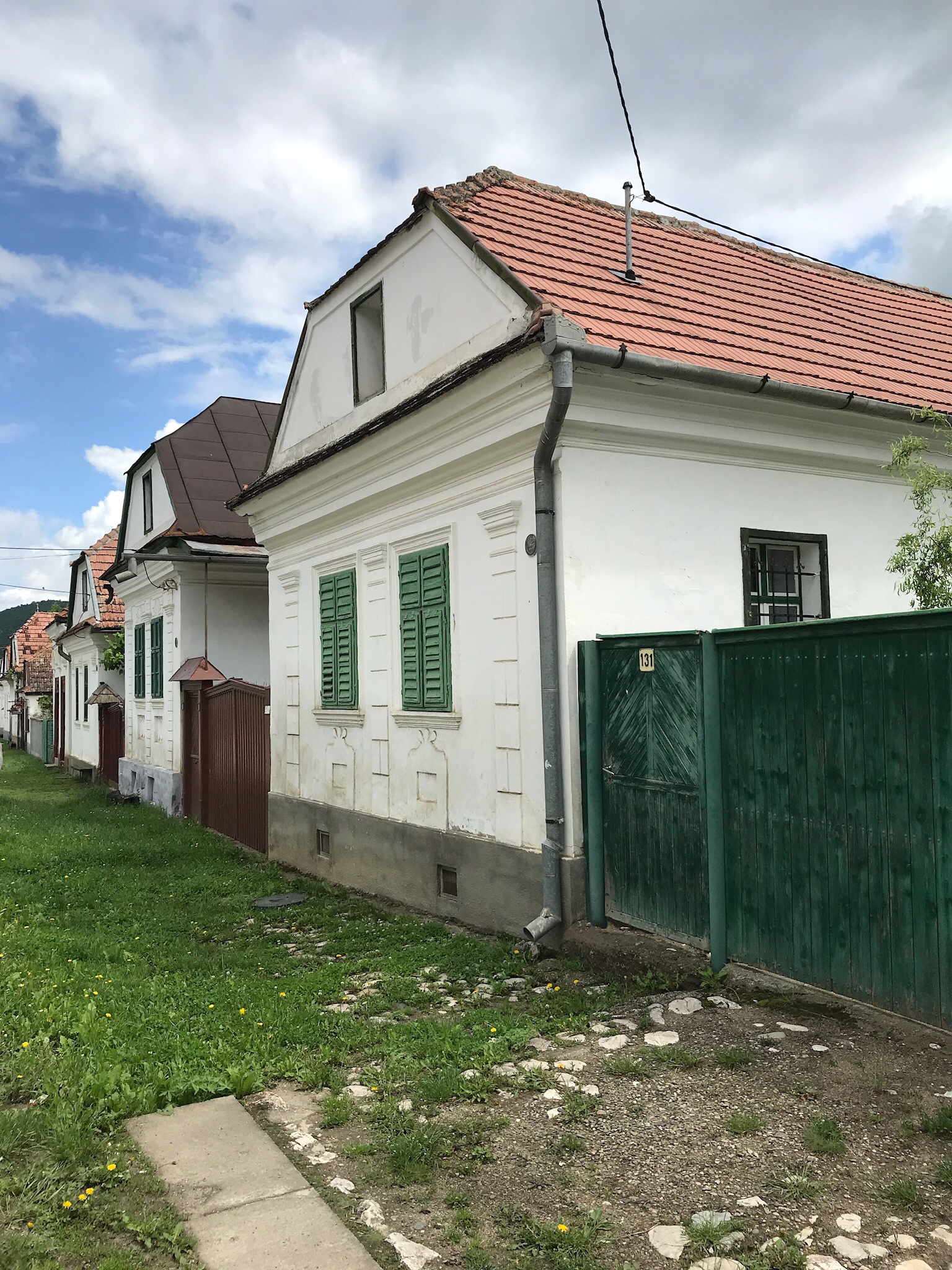 The village is quite small with but two cafes, a small store, and about 1000 residents. Homes are unique, generally white with green shutter and tile roofs with flat gables in front. Unitarian and Orthodox churches share the center square. Rimetea is a commune of two distinct villages, Rimetea, Torockó in Hungarian, and the larger village of Colțești, Torockószentgyörgy to Hungarians. The Hungarians came over 1000 years ago when it was part of the Kingdom of Hungary. Today, a village baker told me as he rolled my Chimney Cake on the grill, that Rimetea is 95% Hungarian. And the towering presence over the village is the sweeping mountain of Piatra Secuiului or what the Hungarians call Székelykő, or “Rock of the Szeklers.”

Clouds had come and gone all day. In the night, rain fell. This morning, low clouds and mist muddy our plans. We trade our hiking boots for street shoes and head to the Salina Turda, the vast salt mines northeast of Rimetea. Though we previously toured the Romanian salt mines in Praid, these mines are quite different. Salt was discovered and has been mined here since the Middle Ages, as early as 1075. But it took the Hungarians to begin the digging in earnest in 1740.

During WWII Romanians found refuge in these mines; more recently in 1992 they were used as a halo-therapy center and to store cheese. Today, tourist happily trudge their long tunnels and marvel at their massive halls. Heigh-Ho, Heigh-Ho…. 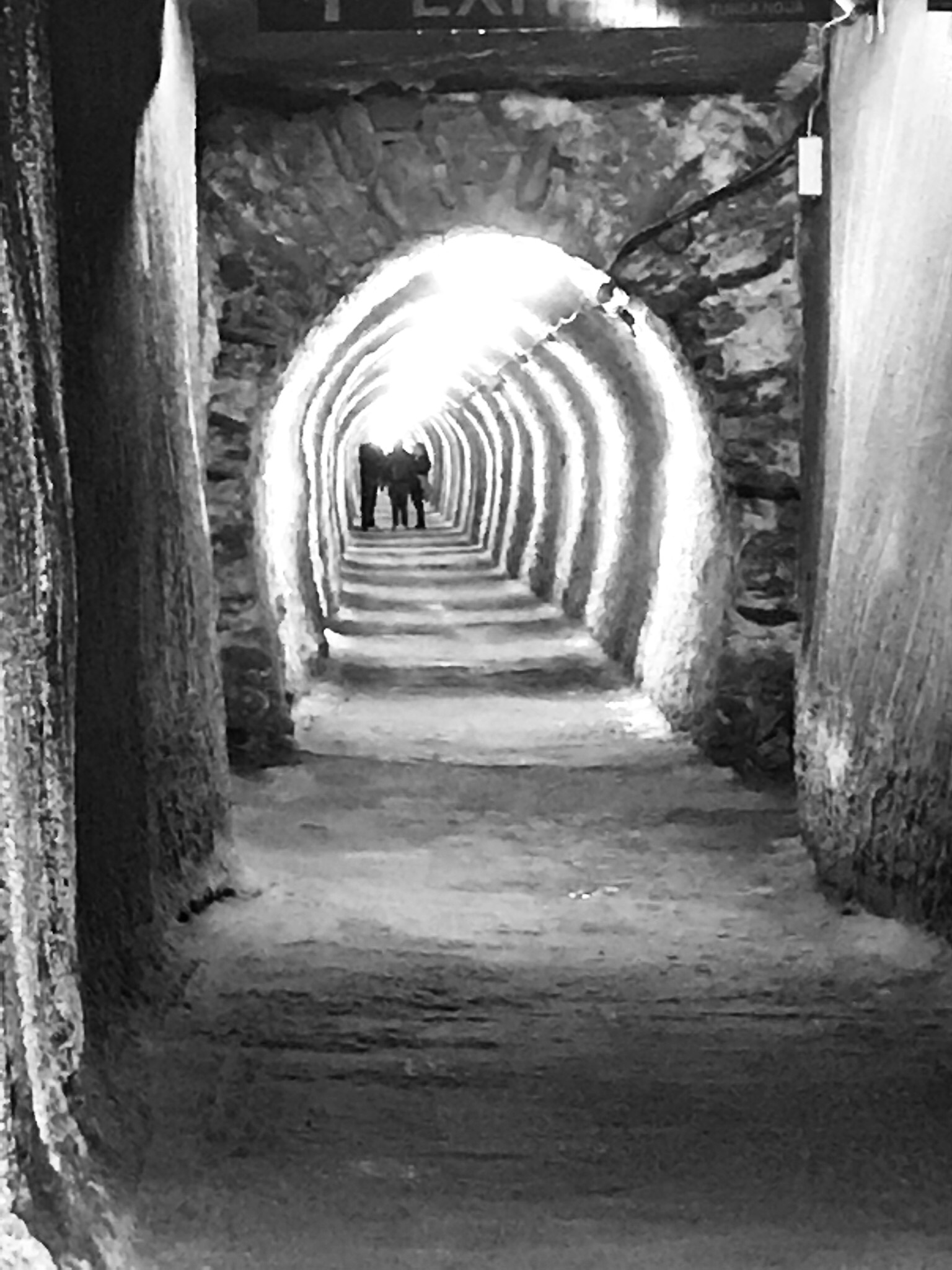 Access is via stairs and a new tunnel through  the older Franz Josef tunnel to the original entrance, a half-mile away. It’s a little like an “Outer Limits” time tunnel. Along the way are several massive conical rooms. The depth from the mouth of the shaft to the base of the mine is 367 feet and several bell-shaped rooms are open for exploration. However, the most attractive aspect of all the mine is the beautiful “art noir” salt designs of walls and ceiling surfaces. 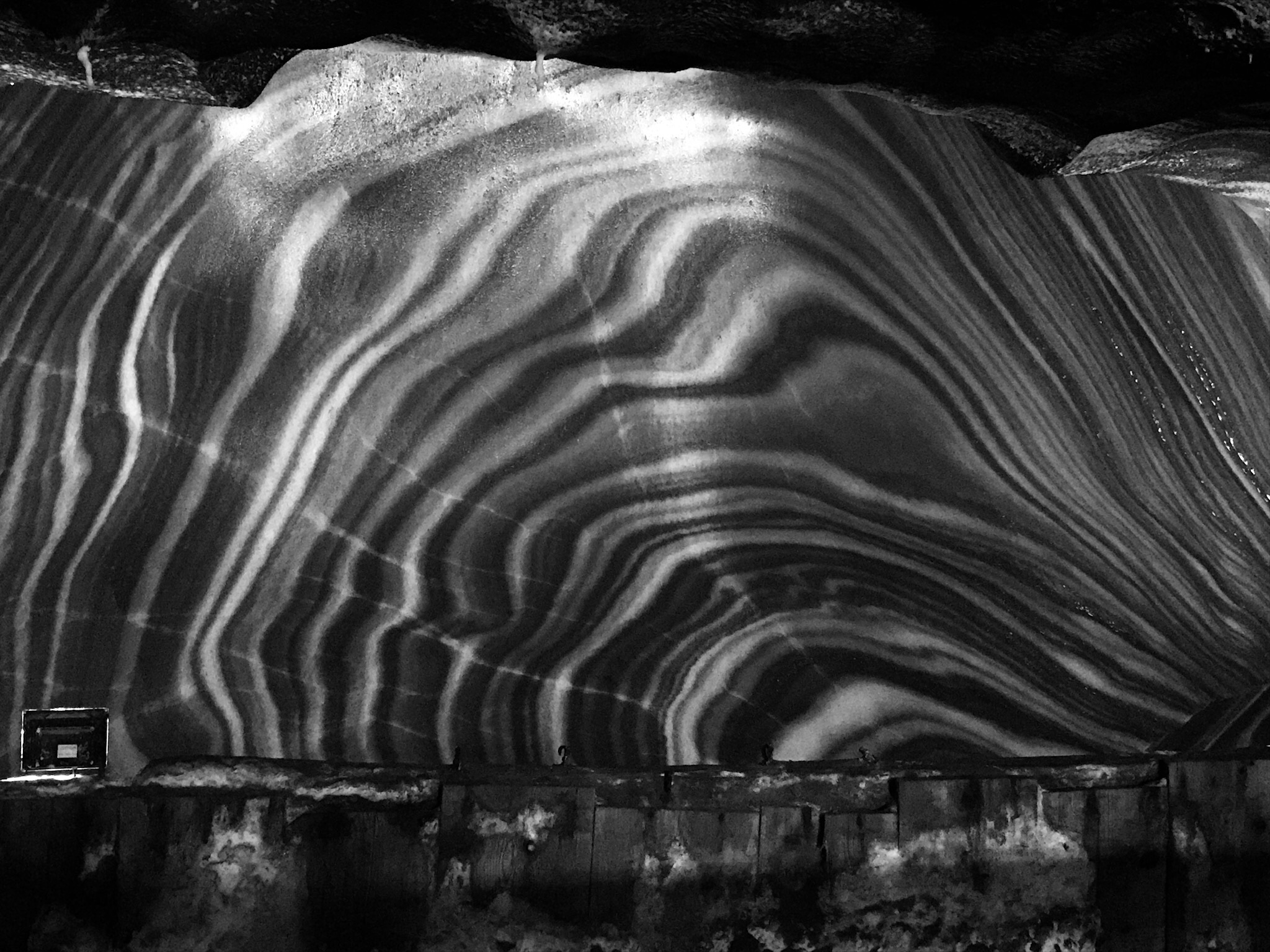 The main hall is the Rudolf Mine. One can stand along upper balconies carved in salt and look deep into the pit but for ultimate effect, board the elevator to descend into the conical chamber 138 feet down. The hall is 164 feet wide and 262 feet long and best seen from below. The salt walls are a canvas of black and white design accented with salt stalactites. If art noir isn’t to your liking, perhaps the full-sized ferris wheel or posing with Mickey and Minnie Romanian style will make your day.

Even deeper, observed from the Rudolf Mine or reached by elevator or very narrow stairs, is the Terezia mine. One can rent a blue or yellow boat to row about its underground salt lake. The lake is between 2 and 26 feet deep. In the center of the lake there is an island formed from residual salt deposited here after 1880, the year when salt mining ended in this room. The island now has what looks like a space ship and bridges one can scamper around.

Cascades, clumps and lumps and stalactites of salt in Rudolf mine

From Rudolf, an elevator or 172 steps lead back to the upper balconies. On the walls of each of the 13 floors of steps is marked the year when the respective level was exploited. The panoramic elevator offers tourists an overview of the whole Rudolf mine and saves one’s energy for the exit stairs to come.

Cascades, clumps and lumps of salt are everywhere. The walls are always damp as water above seeps through the cracks and pores of the mountain of salt. The process of efflorescence has been at work for centuries with evaporation of moisture leaving imaginative designs of salt crystals behind. Stairs, railings, nets, ropes and everything indefinitely immobile will eventually be covered in a layer of salt. Salt becomes the artist here below the surface.

The Crivac room displays a winch called a crivac, a rudimentary machinery used to lift salt rocks to the surface. It dates from 1881. Originally, it was pulled by horses much as were used in grinding mills around the world. Here the sad result was that the horses went blind if they ever were lucky enough to escape the mines alive. Totally dark below, if the horses survived to return to the green pastures above, the sunlight blinded them. 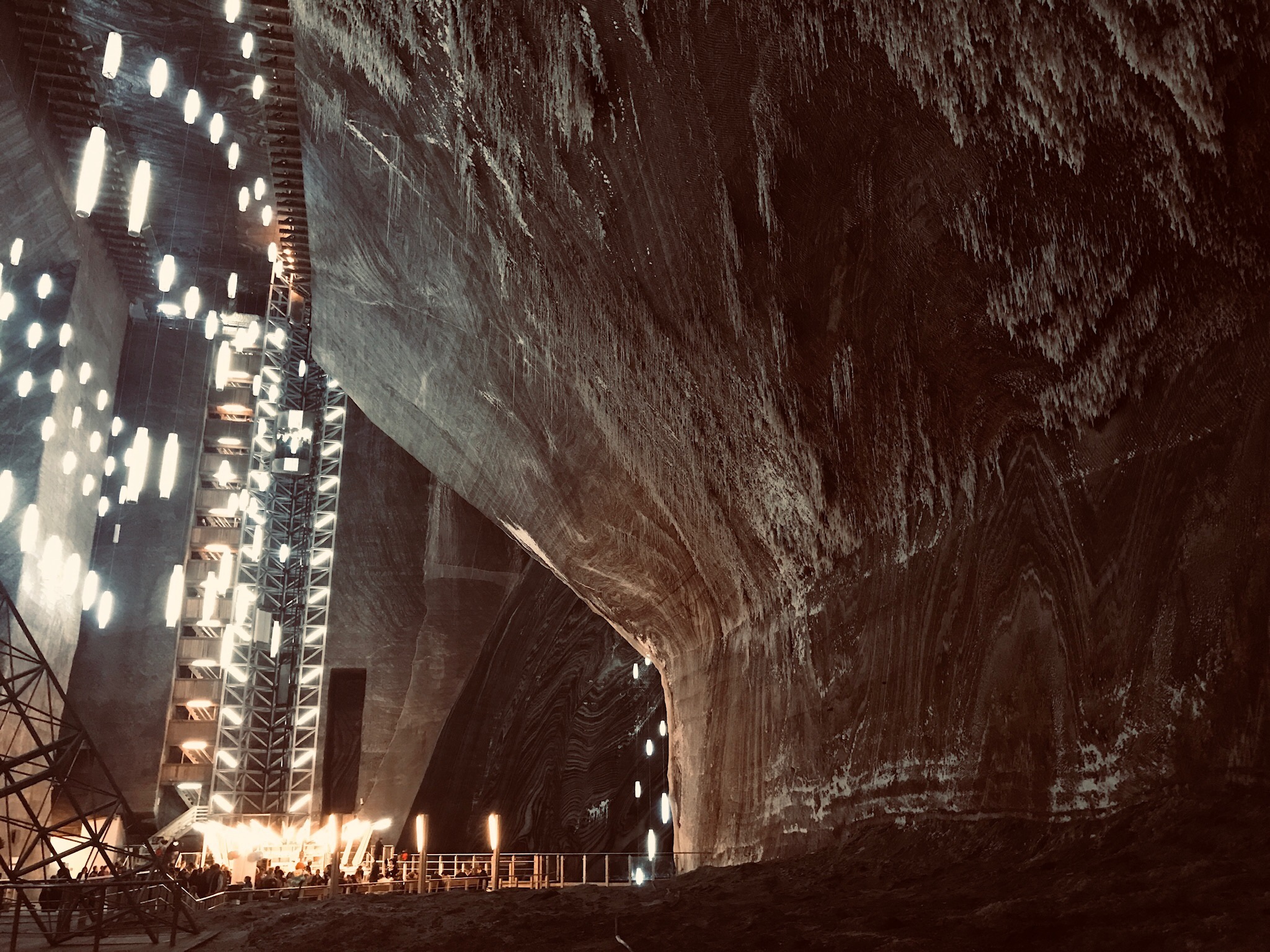 We are also greeted at the top of the mine with sunlight. Donning our sunglasses, we drive to the overlook for Turda Gorge, one of the largest canyons in Romania. It contains hundreds of endemic plants and insects, which is paradise for our biologist leader Lajos. I have traveled with Lajos though the mountains of Albania and respect his love and knowledge of natural history. He lives for the great outdoors and its birds, butterflies and wildlife. And he knows his scat. 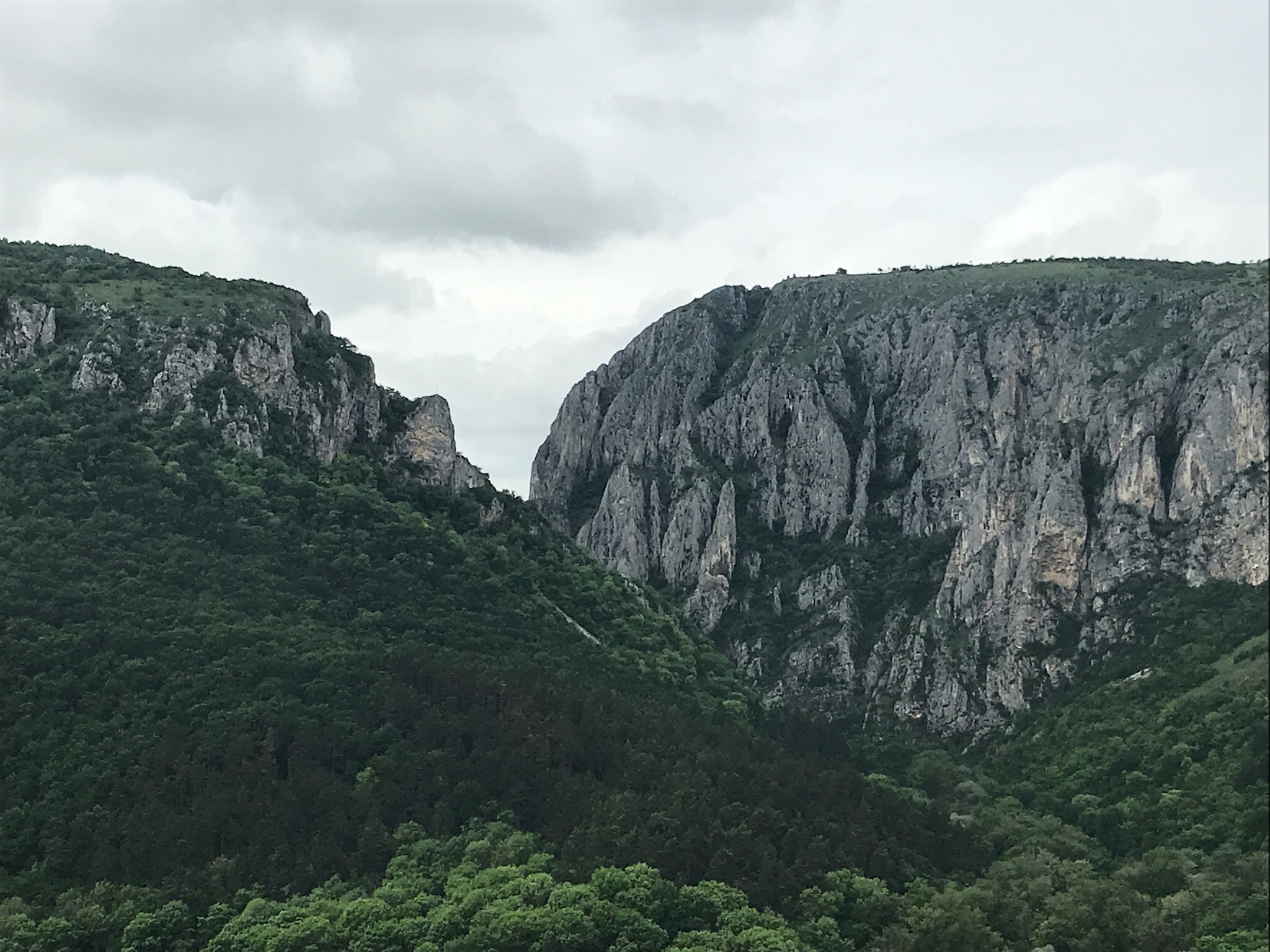 The canyon, from what can be seen, is spectacular. According to legend, the sword of St. Ladislaus, a legendary Hungarian King of the 13th century who escaped the Mongolian Tatars, forged the canyon. He did a great job. It is also home to nests of golden eagles. However, our hike is cancelled because of the muddy, wet trail to the top. We will have to be satisfied with our view of the gorge and the surrounding mountains and fields.

Instead, we drive deeper within the mountains to locate traditional Moc homes and villages. The Mocs are an ancient ethnic group who live a secluded life, many without electricity or running water. Their farming and crafts have sustained them for centuries. The Moc people speak Romanian and their traditional homes have conical, thatched roofs. The oldest village dates to 1204. I am told their lush vineyards, first planted by the ancient Dacians (a Thracian tribe) centuries ago, produce fine wines. Yea! 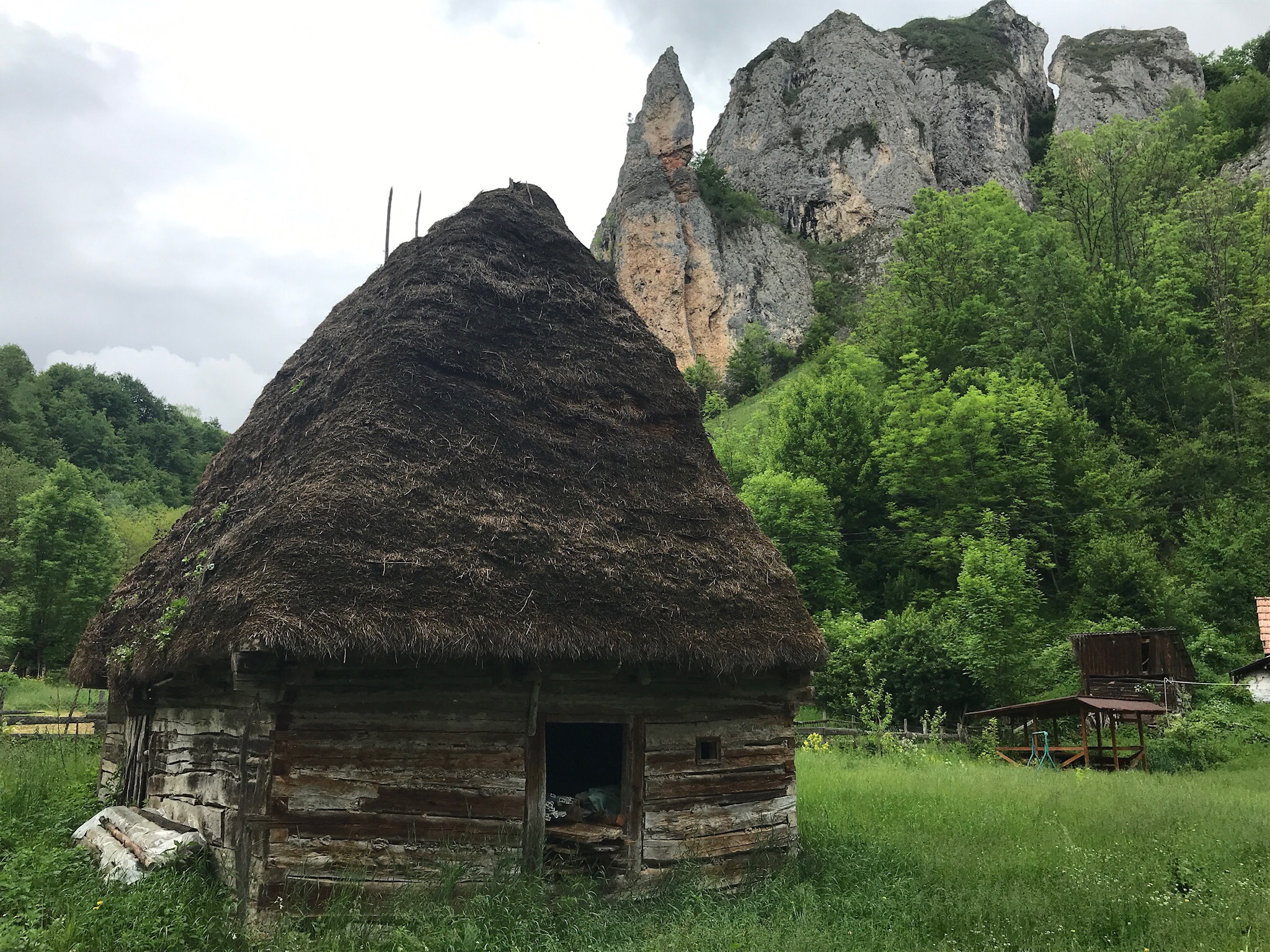 We spot several Moc houses in various states of disrepair and rot. Most are deserted. Nearby, a new, more modern and electrified house has been built. The thatched-roof homes stand below towering escarpments, in meadows, or on hills surrounded by lush green forests. But nature is reclaiming them: roofs cave in, moss grows rampant, windows are gone. It will not be long before these homes completely disappear back into nature.

We also visit a beautiful wood-carved orthodox church, built in the Maramureș-style (Wooden Churches of Maramureș are recognized by UNESCO). Maramureș is a geographical/cultural region of remote Maramureș County in northern Romania. The villages are usually located deep in the forests of the mountains, which explains the development of their wonderful wood buildings and elaborate woodcarvings.

This small wooden church, built in 1981, is unlike anything I have seen before. Many of these churches date to the 17th and 18th centuries. Elaborate woodcarvings decorate the pillars carved into knots of twisted rope; carved eaves, windows and shingle siding are all wood; the church and separate bell tower are similarly crafted. This church has multiple gabled roofs and is dominated by a tall Gothic spire. Taken in situ, these are exquisite pieces of architectural art. Inside, a combination of frescoes and mosaics adorn the walls along with the usually Orthodox iconography.

I am told that one of the five monks who reside here is known as the “Microsoft monk.” He once worked for Microsoft before turning to a more secluded, simple life. Previously, when asked why he chose such a dramatic life change, he responded that he was driven to it after working on Windows 3.1. Don’t know if it is true, but makes a good story. 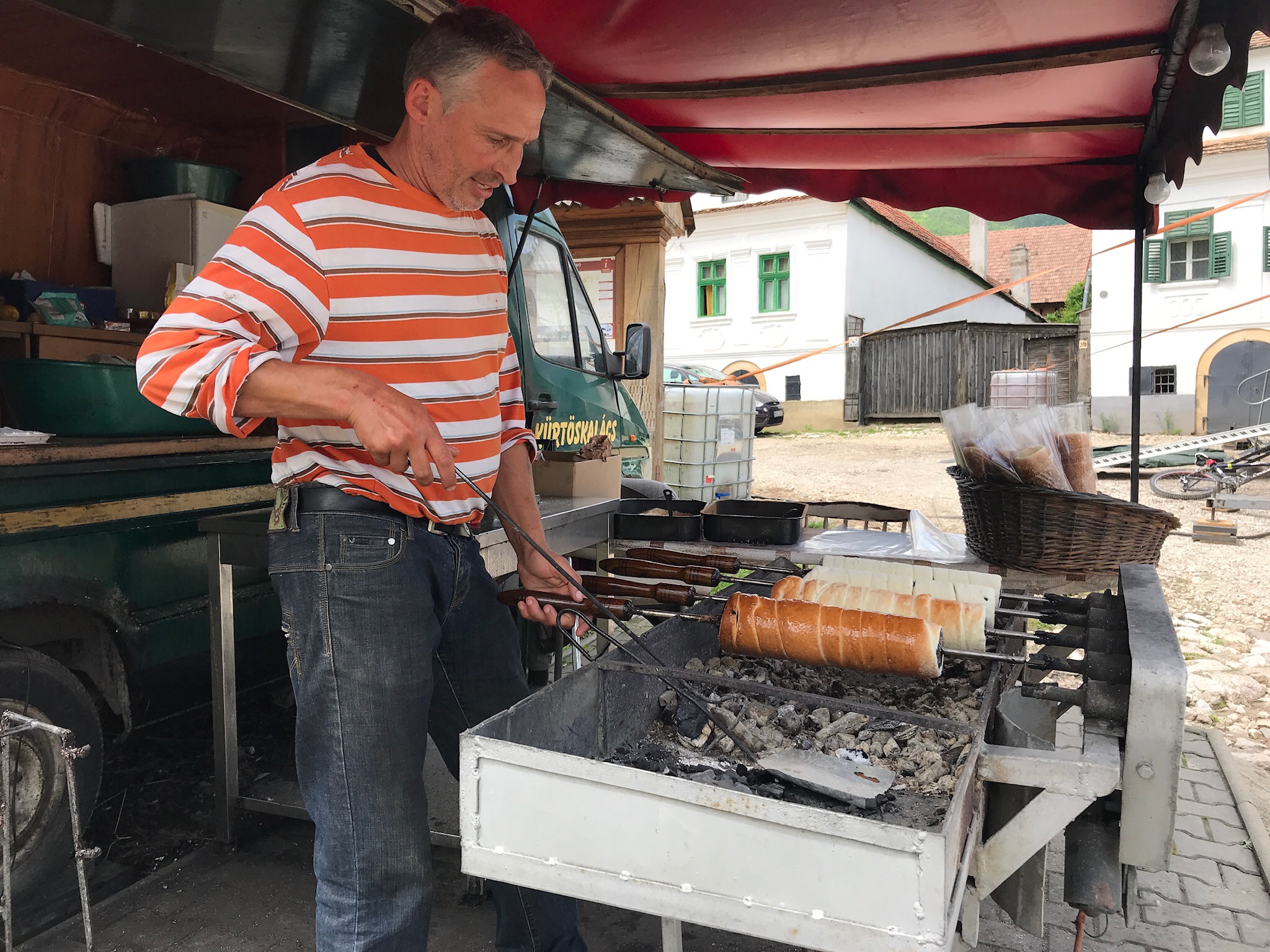 Back in our little village of Rimetea, the population has blossomed. June First is Danube Days. The Danube Channel is a large Romanian television channel who has bought a large building in the village center and each year sponsors this festival celebrating the traditional culture of the region. Kiosks, crafts, horse rides, fresh grilled Chimney Cake, bands and fireworks have turned a very quiet village into a mass of celebrants.