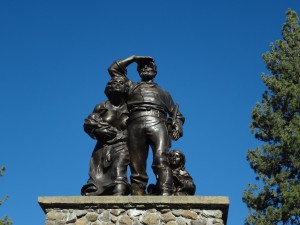 24 Aug – I drove to Truckee via Sacramento, a drive of lies and bad memory: lies that “it’s a dry heat” and forgetting how unpleasant 101 degrees can be. I was thrilled to see $3.51 a gallon gas, which goes to show how I have adapted, being sooooo relieved the price is less than $4. Dull drive until I got above Auburn where I began to see trees and temperatures dropping as I climbed to Donner Pass and Truckee. I arrived in Truckee as the museum closed so drove to my Granite Flat campsite. Disappointed it is noisy, dusty, and close to Highway 89. However, I am excited to be camping for the first time in years. A beer comes first. Then I popped up my little tent, situated my futon, light, accouterments of luxury camping, including Celtic music on the iPad, 3G networking, and a log in the fireplace. I have darling little chipmunks fascinated by the fire and possibility of food. Unfortunately for them, the notices for Plague have not escaped my notice. I dined on sausage with Grey Poupon, chicken, olives, marinated artichokes, and carrots. Tired but quite content. It has cooled considerably. The sun is setting, my fire burning, the sound of train whistles echo in the mountains, and my beer is cold.

25 Aug – Woke to stars, Big Dipper and cool temperatures of mid 60s in the morning. Chipmunks joined me for breakfast as I watched the sun top the towering sequoias and pines. Spent the morning at Emigrant Trail Museum and walked the trail around site of the Murphy cabin, survivors of the Donner party in 1846. That year over 22 ft of snow fell; tree tops were topped at this height. Also saw the site of the 1844 Schallenberger cabin; not an ancestor but I am familiar with that genealogical line. Reminds me that my Shinabarger and Bunyard families passed thru here in the 1860s. This year the snow was as deep; with some patches remaining on the peaks. Downtown Truckee is the typical historic town taken over by tourism. Heritage Museum filled with historic pictures. Rocking Stone Tower not only offers an expansive view of the area, but shelters a big stone that used to rock. Worth a visit both for the view and it’s oddity. Drove via a hot and traffic-jammed Reno to Susanville. Hwy 395 weaves thru valleys with mountains on both sides. Quite nice except for temps of 91 degrees. Susanville, old Rooptown, is at 4186′ but still hot. Downtown more pleasant than Truckee. Alas, the historic sites closed. 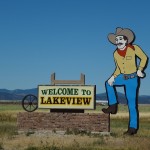 26 Aug – Drive to John Day OR via Hwy 395. Driving has been a breeze as TomTom is a dream as a backseat driver: she doesn’t mind detours, get car sick or crabby. I have programmed all my stops, including Costco gas, along the route. She does get a little bossy when I explore off the planned route but always gets me where I want to go. And my iPad gives me any details of my destinations and directions. Ah, electronic travelers!

Cool 62 degrees as I drove north, the Sierras to the west and Cascades to the east. I see a lot of lava rock in what is high desert, home to wild horses and burros, rubber boas, and Mt. Shasta to the west. The road is quiet and rolls through high buttes, deep ravines and flat valleys with vast fields of grain and grazing cattle. Crossed the Noble Emigrant Trail and I can imagine my ancestors coming from Missouri and Indiana on their way West, the Bunyards to Shasta area and the Shinabargers to Seattle area. I stopped at Alturas to visit the Modoc Historical Museum, one of the best I have seen with large collections of guns, arrowheads, Indian baskets, and local history. Should not be missed.

Continuing north I climb to 5000′ passes, past Goose Lake to Albert Rim, a 2500′, 30 mile long fault scarp with its sprawling flat basin to the west. What is startling is the deep shamrock green Albert Lake to the west. Equally startling was the Great Horn Owl at the side of the road. Did he have a death wish? I stopped for a photo and then he flew to nearest tree. I was relieved he was okay. From Lake Albert to Burns it is true desert. But, as if the scenery had not shown at it best, I climbed into the Malheur Forest and into a snow storm of butterflies. Millions of small white butterflies flit throughout the forest and along the road. Stopping to take pictures, I am covered by them. It is a struggle to get back into the car without countless hitchhikers. It is a fairyland driving thru this beautiful forest of chimney rocks and sweeping valley views, but I feel sorry for the campers I see as their food must be peppered with butterflies and once I arrive in John Day my first stop is a car wash. 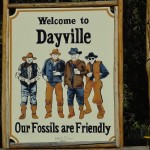 Hwy 395 has proven a good choice for my drive north. The scenery is varied, historic and geologically interesting. High temps of 93 degrees. Little traffic so I can stop often, and do. Nights and mornings are cool, roads easy, towns small and architecturally pleasant: towns where the town hall, library and fire station are all in the same brick building. However, Oregon calls it an “abrupt erge,” I call the 4′ drop at road’s edge a “death roll.” But it is state law they pump your gas. 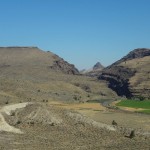 27 Aug – Warning, I brake for geological markers. Around every curve and over every rise (and there are many), lies a picturesque view. I spent the cool hours of the morning exploring John Day Fossil Beds, probably the best and most actively worked beds in America. The land consists of towering mesas and sweeping fertile valleys with the bubbling John Day River crisscrossing the valley. I am awed with its painted hills, quiet, and panoramas. I forget to watch my feet for the cranky rattlesnake. The earliest layer dates 55 million years ago, the top layer from 7 million years ago. Never has volcanic activity and layering been so obvious. I can easily imagine the camels, elephants and oreodonts grazing below, followed by horses, elk and bison of a more recent era. And the jackalope hopping in the scrub this morning.

These layers have yielded many artifacts and fossils which are on display at the Visitor Center. I hiked back in time into the Blue Basin to see the area where many of these fossils were discovered. What was lush tropical forest receiving over 100 inches of rain 55 million years ago is now arid with 10 inches and getting hotter by the minute. Time to depart.

I have decided to do a little backtracking and return to Hwy 395 north to Pullman WA. TomTom will nag so I shut her off for a time as I drive thru magnificent mesas and geologic formations formed by the countless volcanic blasts of lava and ashe coming from the east and Yellowstone and the south from Shasta and Lassen. Farms and green pasturelands cover the valley and I cross the John Day River at least 15 times on my drive out of the park.

The remainder of my route consists of scenic vistas of the Cascades, fertile valleys and rivers, and hundreds of miles of rolling fields of golden hay and wheat. Flat plains sweep as far as I can see to the east as I exit the tall mountains and drive through valleys and rolling hills, some with the brilliant white of wind farms at the top. How contented the early grazers must have been. 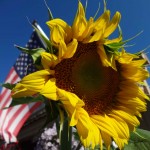 I stop for a moment at the 45th parallel, half way between the Equator and the North Pole. I feel much closer to the former as again high temps hit 99. What is this? Snow was on the ground until after July 4th and probably will be flying in Glacier in a few days. At the time, I welcome it as all my short-sleeved Ts are used, my bag of winter clothes untouched.

I enjoy a wonderful evening of good food and music in Pullman visiting Carla Chandler, a student of mine from Class of 1978. Tomorrow I play like Lewis and Clark.