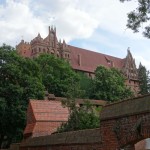 Two outstanding sites are within minutes of Gdańsk. A short sea voyage will take me through the huge port and out the channel to the forested peninsula of Westerplatte and respite from crowds. An hour train ride delivers me to the largest brick structure built by Man and a most imposing fortress – Malbork Castle. Gdańsk’s Motława River is part of the harbor channel that flows into the Vistula and to the Baltic, a centuries old trade route flowing from Gdańsk to the world. Walking to the embankment, just beyond the Green Gate, I board my own ship that carries me 6 miles north to the Baltic and a scene of world history.

Sailing through this waterway, I realize the immensity of the shipyards and port. Miles of dry docks, cranes off-loading and loading tankers and cargo ships, and countless industrial yards line the channel – an important waterway for centuries. From 1926 to 1939 the Westerplatte peninsula was the location of a Polish Military Transit Depot within the territory of the Free City of Danzig (now Gdańsk). Westerplatte is also know as the site for the beginning of WW2.

After WW1, the Free City of Danzig was neither Germany nor Poland but an independent city. The League of Nations allowed Poland to keep 88 soldiers on Westerplatte, which the Poles had secretly increased to 176. They were armed with one 75 mm gun, two Bofors antitank guns, four mortars and a number of medium machine guns. There were no real fortifications, only several concrete guardhouses hidden in the forest. The garrison was separated from Free City of Danzig by the harbor channel, with only a narrow isthmus connecting to the mainland. In case of war, the defenders were to withstand an attack for 12 hours after which the Polish Army was to arrive.

But Hitler held a grudge about this treaty decision and saw the city as Prussian territory. He ordered an attack and the return of this principally German population into Germany’s Third Reich.

Beginning on 1 September 1939, Hitler’s war machine of naval ships, Luftwaffe and soldiers attacked Westerplatte. The battleship Schleswig-Holstein, then on a “courtesy visit” to the Free City of Danzig, opened fire on the Polish garrison without warning. However, German attackers were ambushed by the lightly armed Polish defenders, catching them in a crossfire. Assaults were repelled and the Germans suffered unexpectedly high losses.

The Germans repeatedly bombarded Westerplatte with naval and heavy field artillery along with Luftwaffe bombing raids. The Poles, outgunned, held out for seven days. The expected Army reinforcements were cut off and there was no chance to resupply the garrison. Faced with this reality, the garrison surrendered 7 September. (As a sign of honor for the soldiers of Westerplatte, the German commander allowed the garrison’s Major Sucharski to keep his sword while being taken prisoner.)

Approximately 200 Poles faced 3,400 German soldiers; Poland’s casualties and losses included 15–20 dead, 53 wounded and the remainder captured (compared to 200-300 dead or wounded Germans). Today little remains of the fortifications or barracks, but paths wander past explanatory graphic boards telling the story of battle. Atop the highest point on the peninsula stands a massive stone monument in memory of these Polish defenders. It can be seen from great distances. The defense of Westerplatte served as an inspiration for the Polish Army and people in the face of successful German advances elsewhere, and today is still regarded as a symbol of resistance to invasion.

Chivalrous Knights or sheet-covered murders? Just 40 miles southeast of Gdańsk is Malbork Castle, famous and infamous, the largest Gothic castle in the world. Stories and legends abound about the notorious Teutonic Knights, a Germanic band of ex-crusaders who dominated Northern Poland in the Middle Ages. Malbork, what the Germans called Marienburg, became their stronghold in Northern Europe.

Teutonic Knights first appeared in the Holy Land during the Third Crusade in 1191. Originally called The Order of the Hospital of the Blessed Virgin Mary of the German House of Jerusalem, these knights and monks took vows of poverty, chastity and obedience. Their banner and shield bears a remarkable resemblance to the Swiss flag and that of the Red Cross. Problem was, after the Crusades, the Knights were out of a job. So they became an early ‘Veterans Administration’ building hospitals and caring for injured knights. But they had all that armor, double-handed swords and religious fervor and charity just wasn’t enough. They moved to Venice and became Christian mercenaries, chivalrous but still mercenaries-for-hire pagan killers. 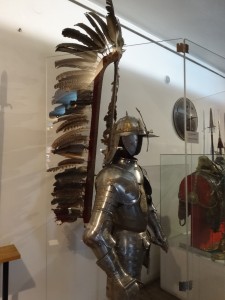 Feathers attached to armor hummed as they charged the terrified enemy.

In 1226 a Duke of northern Poland hired the Knights to eliminate a tribe of pagans on his lands. The Knights were happy to assist. Wearing white cloaks decorated with black crosses (even covering their horses with sheets), they spent the next 60 years converting pagans, or killing them, whichever worked best. Charging their enemy, wielding heavy swords, shields with decorative feathers humming in the wind, the knights terrified and conquered.

However, like house guests who stay too long, the Teutonic Knights decided they liked the neighborhood and stuck around. They built Malbork Castle, as imposing a fortress as one can imagine. Construction began on the banks of the Nogat River in 1274 and the castle was dedicated to the Virgin Mary, their patron saint.

The Knights, as diehard Christians, were supported by the Pope and the Holy Roman Emperor, both of whom may have been relieved they moved to another neighborhood. Not so with the Polish nobility. Their invited ‘guests’ helped themselves to liberties, Gdańsk, and access to the Baltic. Too late, the Dukes realized perhaps inviting the Knights to assist was like selling their soul to the Devil. The Knights invited even more Germans to join them and grew rich from the Hanseatic League trade, took over Estonia, Latvia and eventually Lithuania. By the late 14th c. the Knights were swimming in power, luxury and Polish lands.

In 1386, the Poles and Lithuanians joined forces with the marriage of 11-year-old Jadwiga (Hedwig) of Poland to Jogaila, Grand Duke of Lithuania, who became Władysław II Jagiełło and first ruler of the Jagiellonin dynasty. What followed was the famous Battle of Grunwald on 15 July 1410. Poles, along with Lithuanians, Tartars, and Slavs, some 40,000 soldiers, faced 27,000 ferocious and seasoned Teutonic Knights. Both sides suffered heavy losses, but the Poles emerged victorious. Free trade on the Vistula reopened and the Knights influence waned. By 1575, the Knights were dissolving and the order converted themselves – to Lutheranism. (The Teutonic Order still exists but as a Catholic order.) In the end, Poles did not see the Knights as crusaders nor welcome mercenaries, but more as a bunch of murderous German oppressors and invaders. 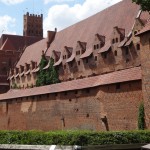 But no denying Malbork is impressive, its residents chivalric or not. It was never taken by force in the Middle Ages. In 1457, the Polish king, having not learned his history lessons, bribed Czech mercenaries to storm the castle. This worked out a little better for the Poles. Malbork became a royal residence for 300 years and used by the Polish king until the First Partition of Poland in 1772 when it reverted to Prussia. It then became a military barracks and deteriorated. The Nazis used it as a POW camp and the invading Russians destroyed large portions of the castle on general principle.

Fortunately for me, Malbork has been renovated to its original Teutonic glory. And indeed it is formidable: huge, solid brick, invincible. Castle, moat, draw bridge, thick walls, towers and turrets, one gate. Entry is thru one narrow passage tightly controlled by guards. Anyone attempting entry must pass five of these well-defended gates in order to reach an inner courtyard. The base of the castle is large stones brought from Sweden; castle walls are of handmade red brick. Walking across the river bridge, the massive fortification was designed to impress and intimidate – home to the Grand Master and his monks and chivalrous knights. Or not so chivalrous depending upon which end of the sword you faced.

Covering 52 acres, the castle consists of a three-part defense: High Castle monastery, Middle Castle and seat of the Grand Master, and the Fore Castle: a maze of rooms, levels, doors, and corridors. This stronghold was as well known throughout the continent as the Pope in his Vatican. The monks may have lived under a vow of poverty, but the Knights and their Grand Master appear to have lived well. I explore the Grand Master’s Palace and less-than modest apartments, Grand Refectory, kitchen, chapels, and cloisters. 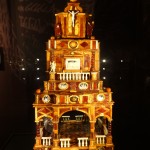 A stunning exhibit of amber proves it is good for more than just jewelry. On display are chests, wine glasses, altars and priceless ornaments. I learned that vodka over amber is supposed to help arthritis. Over 300 colors of this translucent fossilized resin are found along the Amber Coast. And yes, there are bugs imprisoned within a few specimens.

The Armory contains the usual swords, shields, banners and armor. The best display is the Teutonic Knights’ Hussars (horse brigades) who attached feathers or wings to their armor thus creating a terrifying humming sound as they galloped towards the enemy. (Imagine millions of killer bees or bats taking flight.)

Methods for heating this gigantic castle were ingenious. The boiler rooms were a series of 11 cellar rooms with furnaces with a second chamber above for super-heated rocks. These rocks would spread radiant heat, but not smoke, to the rooms above via small round vents in the floors. An immense kitchen was equally state-of-the-art with ovens, cold storage, brewery, and dumb waiter to the refectory upstairs. 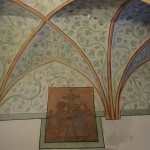 The Grand Master’s Palace is very grand indeed, worthy enough to be used by Polish royalty after the Knights left. These rooms are beautifully decorated with religious frescos along with those of grape leaves and grapes, stained glass, inlaid wood and marble floors, delicate vaulted ceilings. Both summer and winter refectories were used. Private quarters and chapel are ornate and comfortable. The GM’s Grand Refectory could seat over 400 celebrants. The Knights also stayed in this middle section of the castle. Who were the Grand Masters? Four stern-faced bronze statues in the main courtyard will introduce me to four of them. A small corner chapel holds some of their tombs.

Across an inner drawbridge is the High Castle where the monks lived, the kitchen operated, the beer was brewed, and off limits to all but the monks. Rooms include chapels, refectory, dormitory, and treasury where their own coins were minted. This was the last line of defense and where the food and water well were located. Here, too, was the torture chamber. Within the Chapter Room monks and Knights from around the world elected the next Grand Master. Its 14th c. frescos are anything but simple.

Tucked in a far corner is a little statue of a devil, pulling his beard and crossing his legs, pointing down a long corridor to the Dansker Tower – the latrine. As was typical of the age, the toilets dropped straight down into the moat. What for toilet paper? Cabbage leaves.

Roaming the rose gardens, terraces, turrets, courtyards, chapels, and refectories of Malbork Castle gives me an impression of secrecy, chivalry, religious dedication, and power. All that it was meant to do.