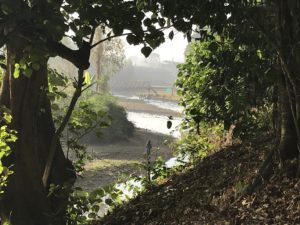 First the rooster crows, impatient for daybreak. A mass can be heard from somewhere to the south. The Call to Prayer echoes to the east. A hungry mosquito can be heard attempting to breach my netting. The familiar ping of “I’ve got mail” tells me the internet has been turned on. Ravens leave in mass, calling to all their friends that the early bird will get the best pickings. A donkey brays his complaint that his workday is about to begin. My tent walls are thin and the morning noises tell me it’s time to rise. The only thing missing is the sun which is still an hour below the horizon.

Today, I will visit the Ari tribe.Just outside the town of Jinka lives a small Omotic tribe – the Ari. Omotic languages are a subfamily of Afro-Asiatic languages spoken in southwestern Ethiopia, with over thirty members, all having comparatively few speakers. The Ge’ez script is used to write some Omotic languages, the Latin alphabet some others. They are fairly agglutinative and have complex tonal systems. 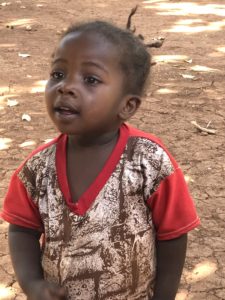 The Ari, numbering only about 4,000 people, are said to be the oldest of the Omotic tribes. It is believed the Ari was the original tribe from which the others, Karo, Mursi, Hamer and others of the Lower Omo Valley originated. Our visit becomes the entertainment of the day for the packs of children fascinated by hairy arms, blue eyes, blonde hair, and a handlebar mustache.

This is a large village laid out along several streets. The soil is a rich, porous red, more volcanic granules than dust. The Ari grow several cash crops like coffee and chat. Mangoes, bananas and pineapples are cultivated as is the enset plant. Much of the village seems to rest on a flat plain, susceptible to flooding. The buildings range from typical bamboo huts to more substantial mud and wattle. Many buildings have decorative paintings of people, animals and symbols. Cooking and sleeping is all inside. The women are friendly and happy to demonstrate their skills. The many children are happy for the distraction.

One of their most popular products for trade is their 40% grain alcohol. The Ari grows the maze, then soak the maze for three days to speed fermentation. They mix it together with hops and sorghum to dry in the sun, creating a thick powder. This powder is mixed with water and ferments for a week. This mixture goes into a pot/still and boiled. The condensation is collected and bottled. The “gin” is very popular, as one man was willing to demonstrate, twice. 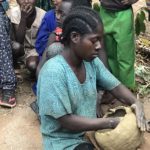 A young lady demonstrated pottery making. Within a few minutes she skillfully pounded the sandstone to mix with clay for a strong mixture. This she quickly formed into a wonderful 2-gallon cooking pot. Adding a handle and spout, she smoothed and finished a pot in minutes. This she will dry in the sun then add the red soil of the region to color the outside. The man brings the grass for the in-ground kiln in which the pot will be fired. After firing, the woman polishes the pot to a glossy finish with casaba root. This woman has been making pots since age 10. She makes about four a day and sells them for 25 Birr, about a dollar. 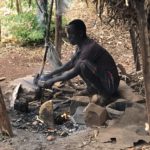 The furniture maker was not as willing to show his hack saw and sandpaper for free. He was making a bed frame with few tools beyond patience and a young boy to do the sanding.

The blacksmith was busy making a field knife. Pumping his bellows, which appeared made from an inner tube, it was hot work on a very hot day. He buys used metal at market and reshapes according to the customer’s needs. 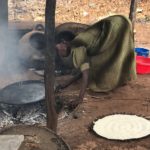 A finally demonstration was the making of the Ethiopian food staple, injera. Here the flat bread is made from maze, which is cheaper. It is also white compared to the green colored injera made from teff. Using a large round clay plate lightly rubbed with oil, the fermented injera batter is poured onto the plate. It is covered by a large lid made of bamboo, clay and dung, and cooked over a hot fire for about four minutes. The result is a thin pancake about the size of a large pizza. It is quite good and with a slight sour mash taste. She sells these injera at the market for about 3 Birr each.

Each tribe is different, each tribe is unique. Tomorrow, I will drive further southeast into the Lower Omo Valley. More tribes, more Birr.