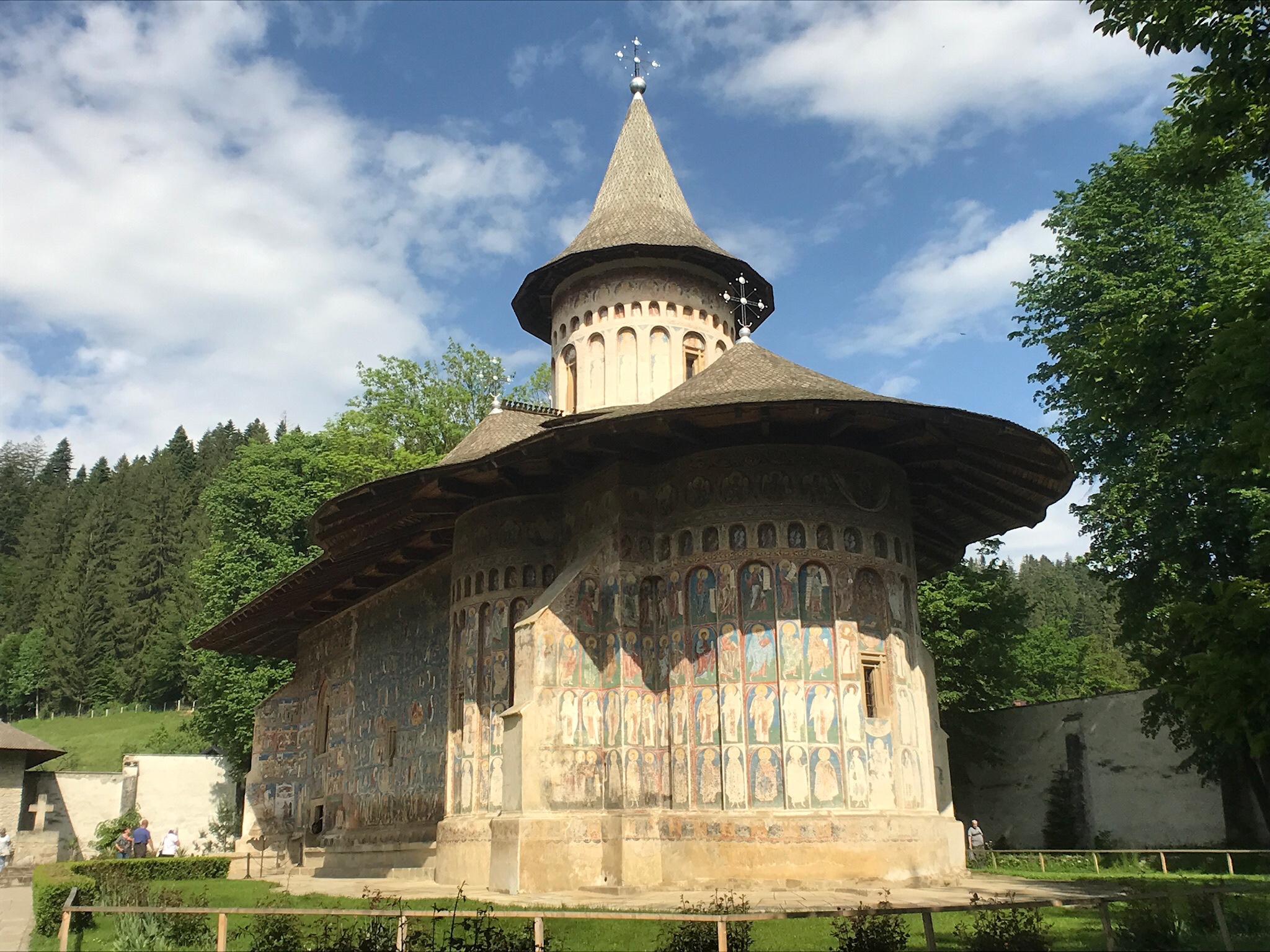 One of the most incredible sights in the world are the Painted Churches and Monasteries of Moldavia. The historical region of Bucovina is famous for them. There are 22 painted monasteries with 16 restored. Seven churches were placed on the UNESCO World Heritage list in 1993, an eighth registered in 2010. Most of these wonders are contained in a relative small region. I will be visiting seven of them over the next two days.

These eight churches of northern Moldavia (not to be confused with the country of Moldova just east of here), were built in the late 15th to the late 16th centuries. Their external walls are covered in fresco paintings and recognized by UNESCO as masterpieces inspired by Byzantine art. All remain true to their original design and are particularly well preserved. Far from being mere wall decorations, the vibrant paintings cover the entire facade and represent complete cycles of religious themes. Their exceptional composition, the elegance of the characters, and the harmony of the colors blend perfectly with the surrounding countryside, which is also spectacular. 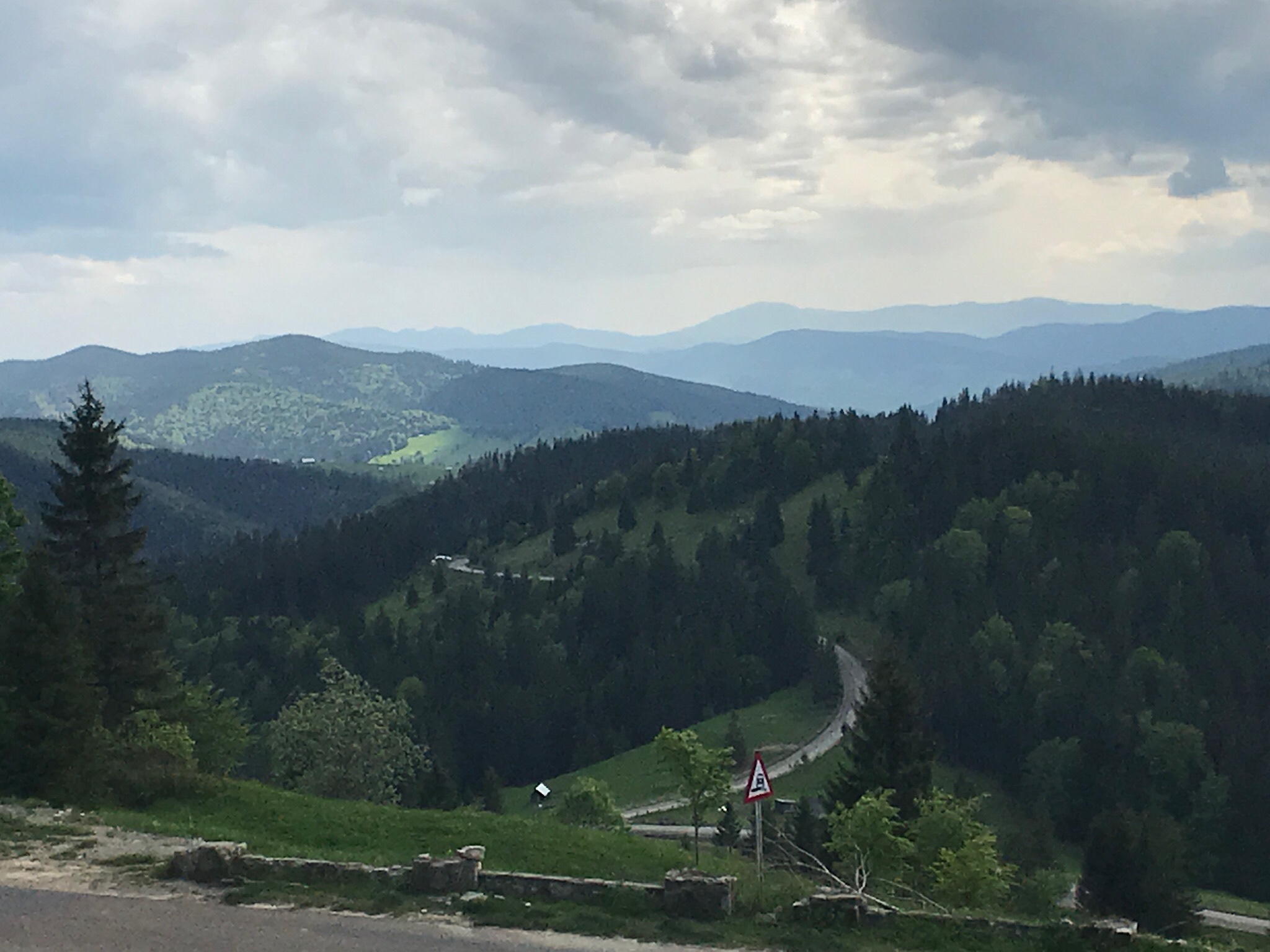 The region of Bucovina is beautiful. The rolling green hills and valleys are dotted with picturesque villages and monasteries. This territory was part of Moldovia Province since the 14th century, Moldovia being the historic region of the Eastern Carpathians, the western half of which is now part of Romania. (The eastern side belongs to Moldova and northern parts to the Ukraine). Bucovina was first recognized as a district in 1775, and was made a nominal duchy within the Austrian Empire in 1849. It was during this period of patronage by the Habsburg Monarchy that Stephen the Great and his successors on the throne of Moldavia Province witnessed the construction of these painted churches. These include churches in the villages of Arbore, Humor, Moldovita, Patrauti, Voronet, Dragomirna, Probata and Sucevita.

Note: there is an entrance fee plus an additional 10 lei if you want to take photos. This fee is only for the exterior. You are not allowed to take any photos of the interior of the churches. 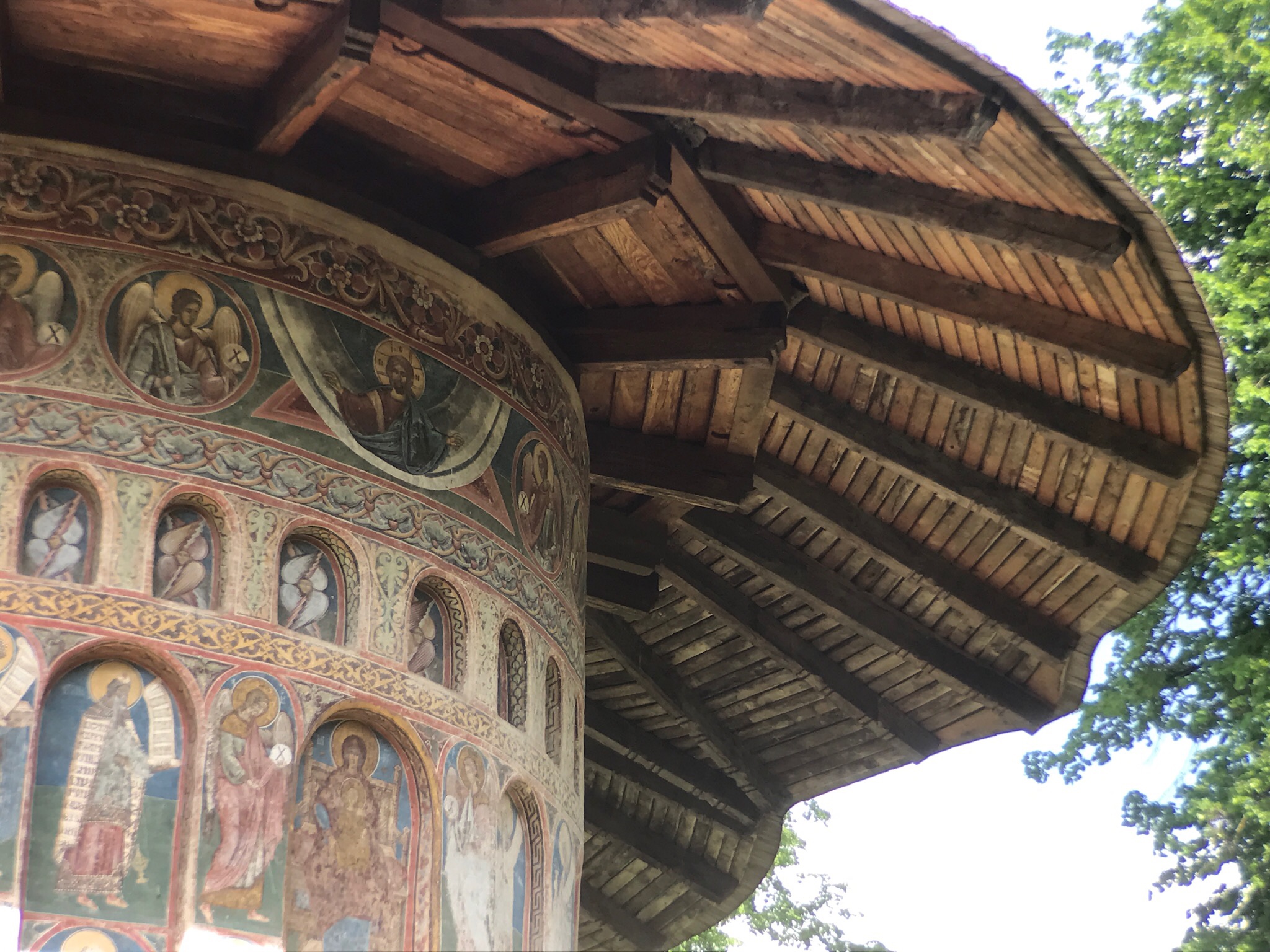 Church of St. George of the Voronet Monastery is one of the most spectacular of all painted churches. Known as “The Sistine Chapel of the East,” Voronet is renowned for its unique, intense shade of blue, known in Romania as “Voronet blue.” This azure blue is the dominant color of the exterior walls and is made from crushed azurite mixed with an unknown substance that makes the shade lighter and much more vivid. (Azurite is a soft, deep blue copper mineral produced by the weathering of copper ore deposits.)

The monastery was built by the medieval prince Stephen the Great in 1488, taking less than 4 months to complete. Stephen the Great is famous for building and influencing the construction of dozens of monasteries and churches over Moldavia (allegedly, he founded a religious building after each important military victory and Stephen was greatly victorious). Voronet Monastery is also home to the tomb of Saint Daniil the Hermit, the monastery’s first abbot. After having been deserted in 1775 when the Habsburg’s annexed the area, the monastic community returned in 1991 and today a few nuns reside here. 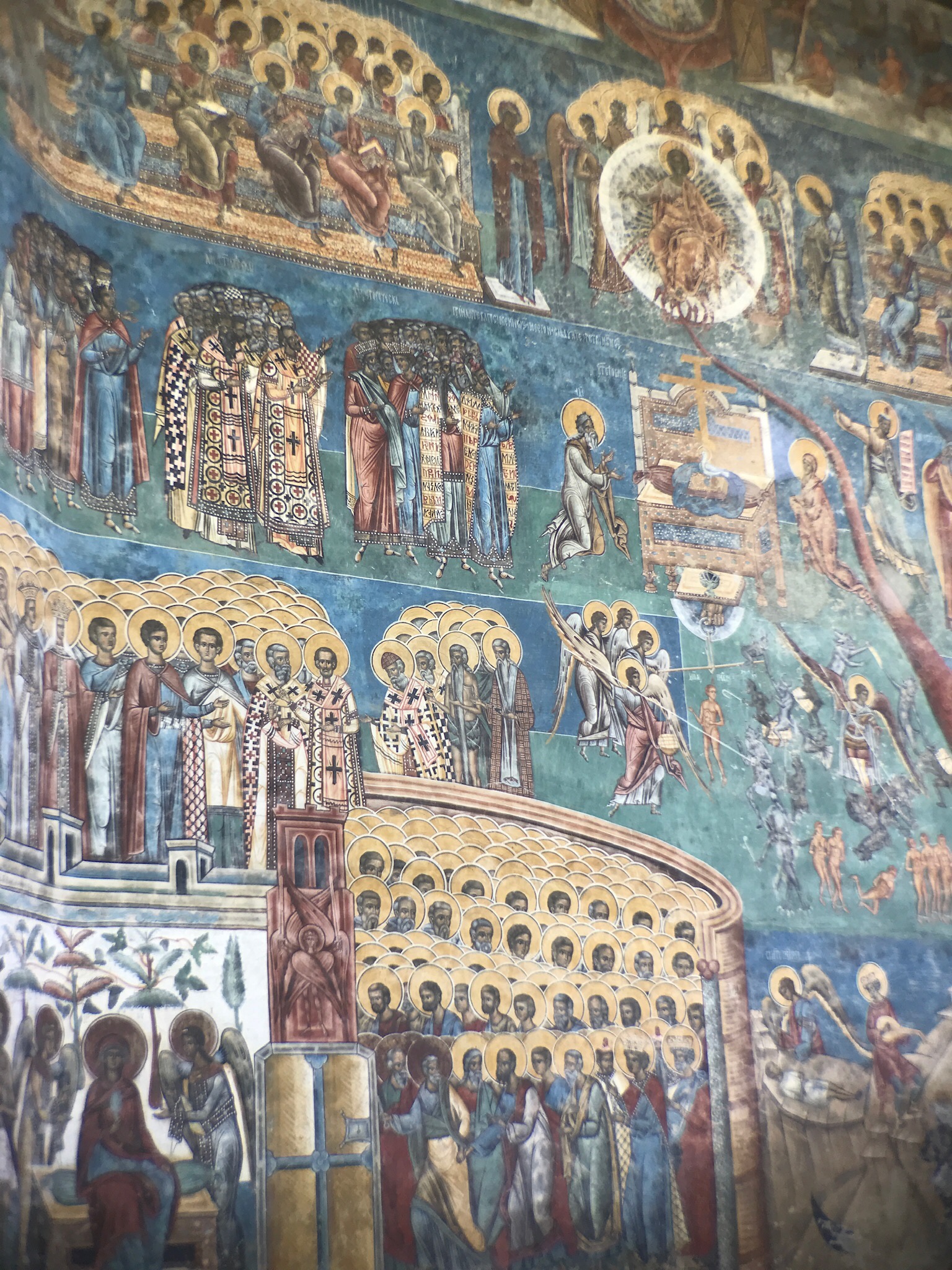 Its exterior walls are a masterpiece of color and art illustrating scenes from the Bible. Gracing this azurite background are stories depicting the life of Jesus, images of angels and demons, and heaven and hell. The righteous ascend to heaven while sinners descend to hell. The line of sinners is quite long. A gigantic depiction of the “Last Judgment” graces the western wall. Angels Michael and Peter are opening the gates of heaven while the other pushes sinners to hell. A representation of God and the angels unfold a scroll containing the zodiacal signs.

Zodiac signs are common in the monasteries. In the entry to the first room, there is commonly a panel which depicts a scene for ever day of the year, 365 panels wrapping around the room. Most often, the same artists painted these churches. In fact, Voronet was painted inside before it was decided a few years later to also paint every inch of the exterior walls. From that time, it became a tradition. Now, it is required that every new monastery must have both interior and exterior painted. Not an inch is left unpainted. 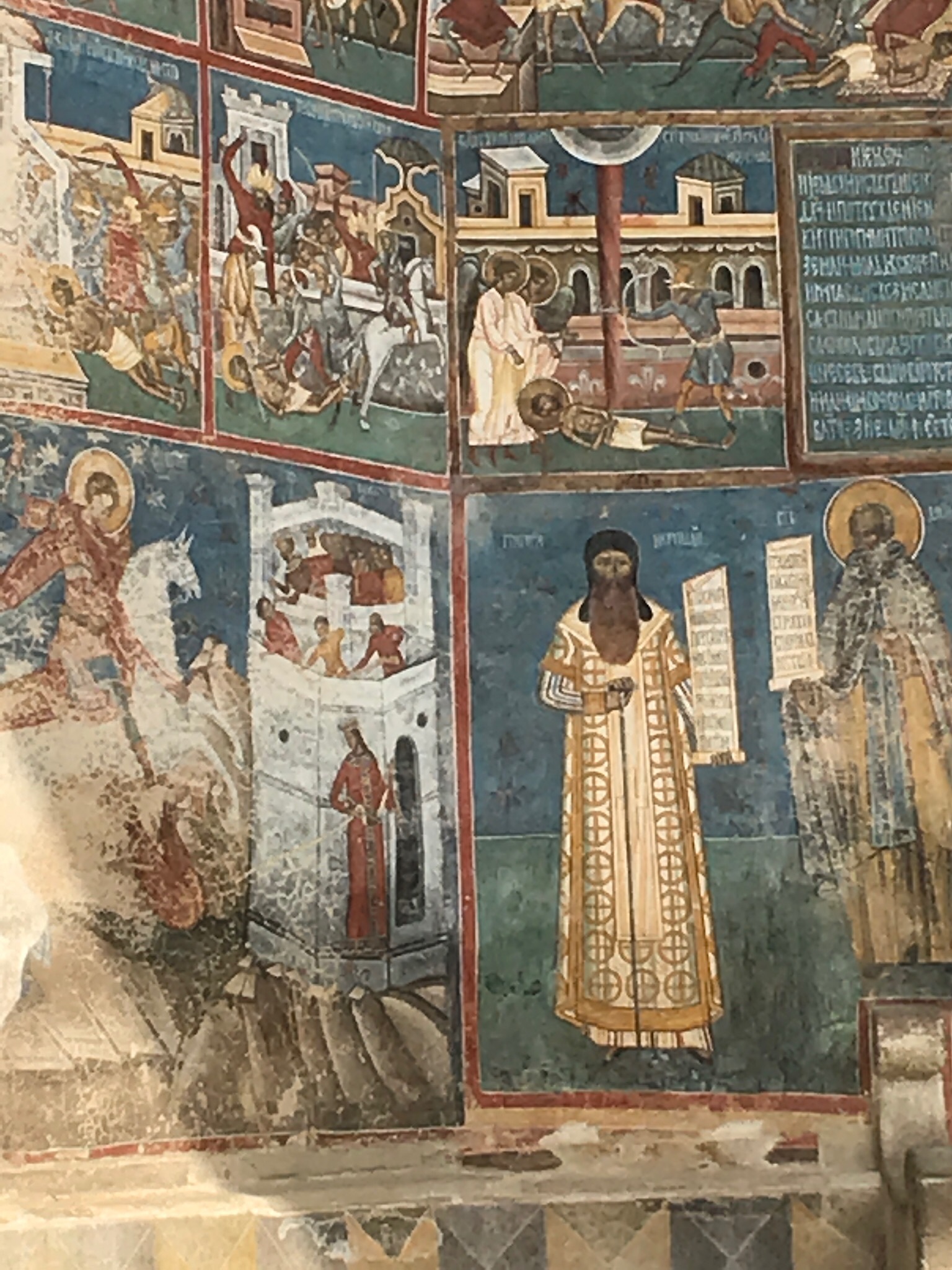 The painted church is more than elaborate 15th and 16th century frescoes. Their purpose was to make the story of the Bible and the lives of the Orthodox saints known to villagers through the use of images. Villagers who could not read or did not possess a Bible could certainly understand these allegories of sin and redemption. Not only the symbolic characters of Adam and Eve, Cain and Abel, prophets and saints are represented, but Greek philosophers Aristotle and Plato. On the north façade, rows of ceramic discs in yellow, brown and green include heraldic motifs, such as the lion, the head of the bison species from the Moldavian coat of arms, and creatures from Western European mediaeval literature, such as two-tailed mermaids. For good measure, and familiar to the local community, the painters added symbols of local culture including musical instruments, traditional clothing and nearby landscapes.

And speaking of the landscape: The Voronet Monastery is surrounded by the equally vibrant green forests and mountains. The overall effect is awe-inspiring.

The interior of the church is typical with a portal, entry room with very observant nun in all black, a second small room, and a third room containing the iconostasis. Each is a small chapel with every inch of walls and ceiling decorated with the usual array of icons. The overall affect is stunning. These churches have learned to burn their candles in the courtyard so paintings are not exposed to smoke and bright lights. Colors are muted but frescoes are remarkably well-preserved. 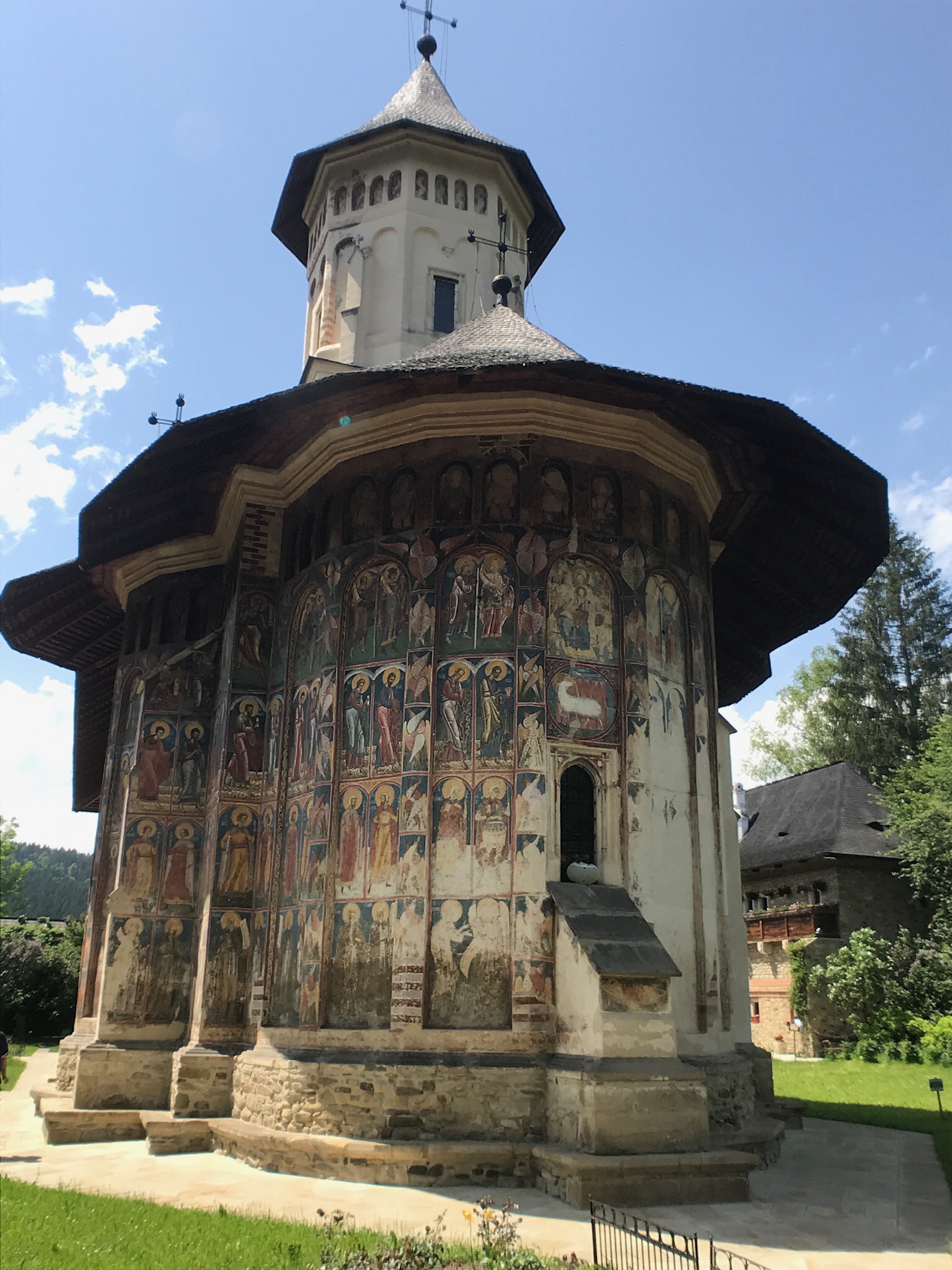 The Church of the Annunciation of the Monastery of Moldovița is one of Romania’s best-known monasteries. Moldovita’s frescoes and their vibrant colors have been successfully preserved, some of which look as if they were painted yesterday rather than in 1537.

The small monastery was built in 1532, by an illegitimate son of Stephen III of Moldavia, as a barrier against the Muslim Ottoman conquerors from the East. Its brilliant frescoes are filled with yellow tones and the predominantly yellow-and-blue paintings on its exterior represent recurring themes in Christian Orthodox art.  Above the narrow east window, a procession of saints leads up to the Virgin enthroned with the Child in her lap. The “Siege of Constantinople” is depicted showing the intervention of the Virgin to save the city from Persian attack in 626 AD (built in an area more fearful than respectful of the Turks, the scene on the walls depicts the enemy as turbaned Turks rather than the Persians. Overall, it looks more like the fall of Constantinople to the Ottomans). 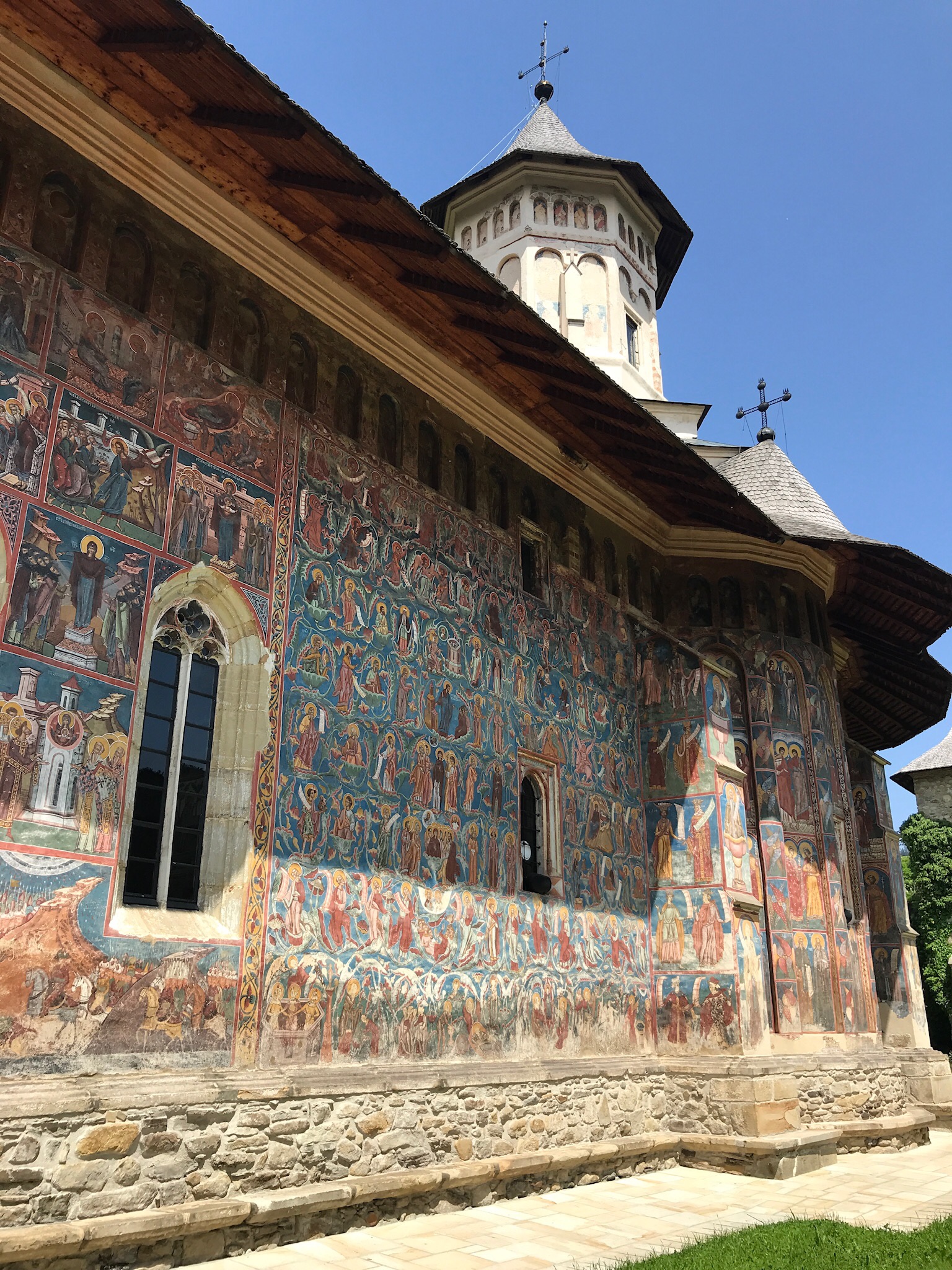 Our guide does an incredibly thorough job explaining the panels and allegorical scenes. It is far too much to absorb. If one knows the stories of the Bible, then these walls become complete manuscripts of biblical times. If not, then the frescoes become masterpieces of art.

Tall arches open to the outside provide light. “The Last Judgment” covers the west wall. Moldovița was one of two churches built with an open porch (the other at Humor). There is a small hidden nook above the burial-vault, and the windows and doors are closer to a Gothic style. 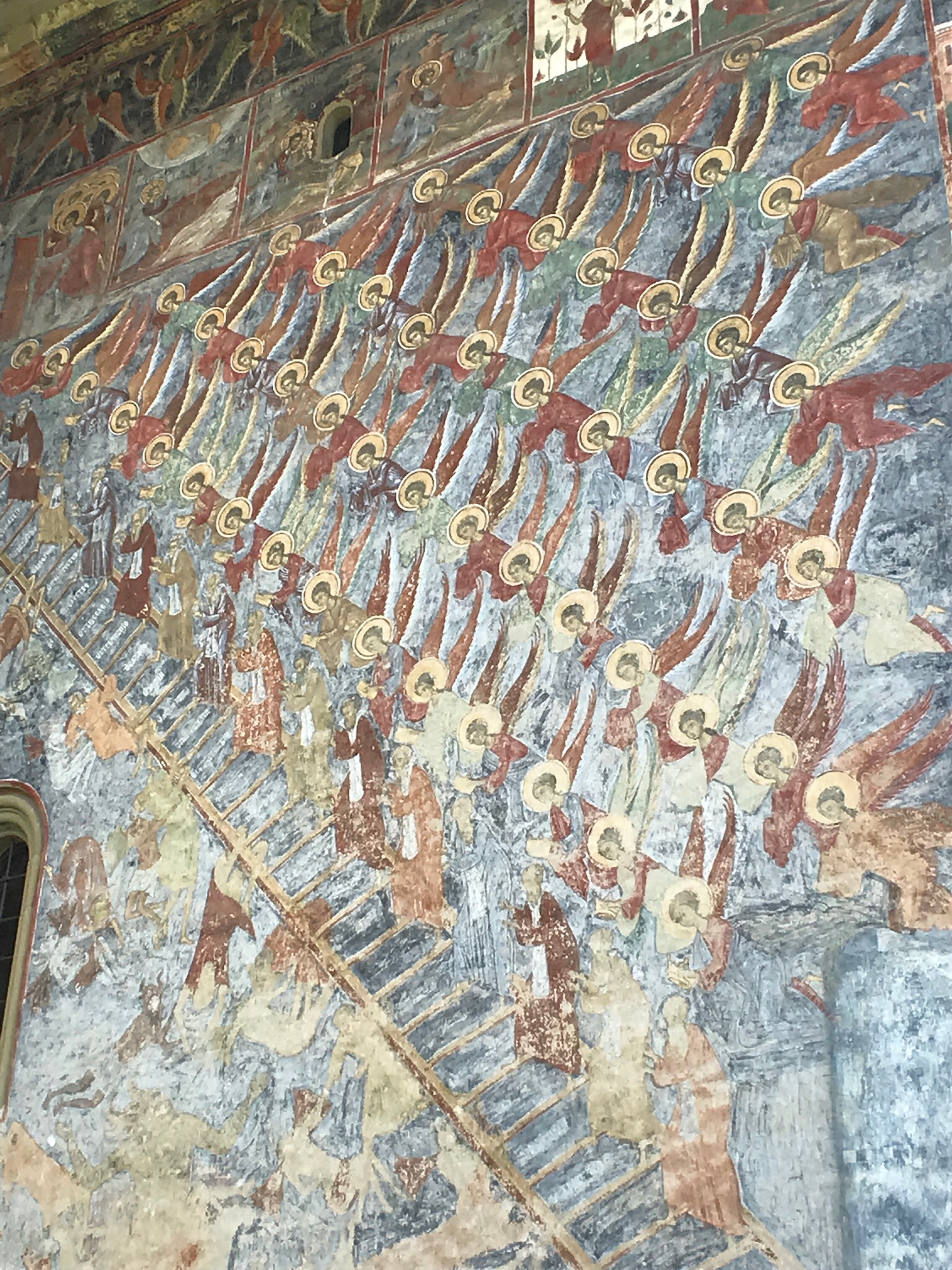 Church of the Resurrection of Suceviţa Monastery is different as it is a monastery surrounded by high walls and buttressed defense towers. Suceviţa is chronologically the last among the painted monasteries in Bucovina. Founded in 1581 by a Bishop and further fortified by his brother, it has the typical overhanging eaves which help to protect the exterior frescos. An ornate steeple tops the church. The church is beautifully painted in ochres and reds, greens and blue. Probably the most popular of the depictions is the Ladder to Paradise comprised of red-winged angels assisting the righteous into heaven. Not so nice are the sinners slipping through the rungs and tumbling into hell assisted by grinning devils. Both interior and exterior walls of the church are entirely decorated with murals.

Surprisingly, these churches were quickly painted by a group of artists who usually completed both interior and exterior in a couple years. This is pretty fast considering the process of painting was slow and exact. The churches were first plastered and it was important to apply the paint before the plaster dried too much. By applying the paint to damp plaster, it allowed the paint to be absorbed into the plaster rather than just painted on top of a white surface. As a result, the paintings have survived centuries and are as vibrant as when first applied. Here at Suceviţa, it was an unusual situation in that two brothers were painting the church. One of the brothers fell to his death and the other brother refused to paint any more. In honor of the fallen brother, no other painters would step in. Therefore, several sections of the exterior walls are left unpainted. 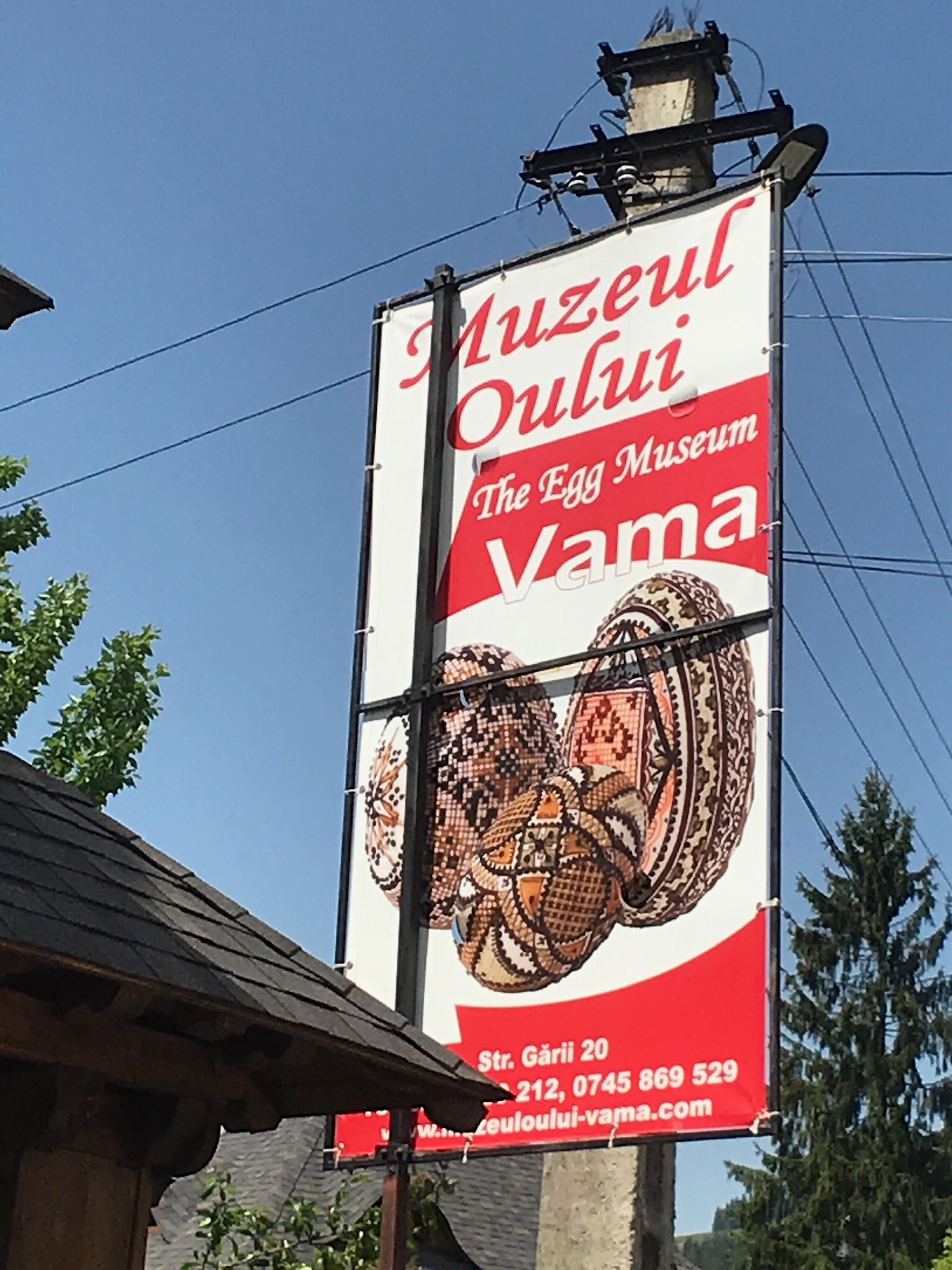 For our first day in Bucovina, we visit two unique artisans. In the small community of Vama, Letitia Orsivschi collects and paints eggs. In her small Egg Museum, there are over 7,000 eggs from all over the world. (There are no explanations.) For over 15 years, she has collected every variety of egg for every use from Easter eggs to dyed and decorated patterns traditional to Romania. There are decorated eggs from 79 countries and the variety and quality range from the rustic that grandma made for the Christmas tree to exquisitely painted eggs from Russia. There are bird eggs, reptile eggs, all size eggs from emu, turtles, and crocodile, to flamingo, ostrich, partridge, sparrow, and pigeon. There are even gecko eggs; yes, evidently geckos lay eggs. In other words, any egg out of an animal’s butt can be painted, bejeweled or decorated. 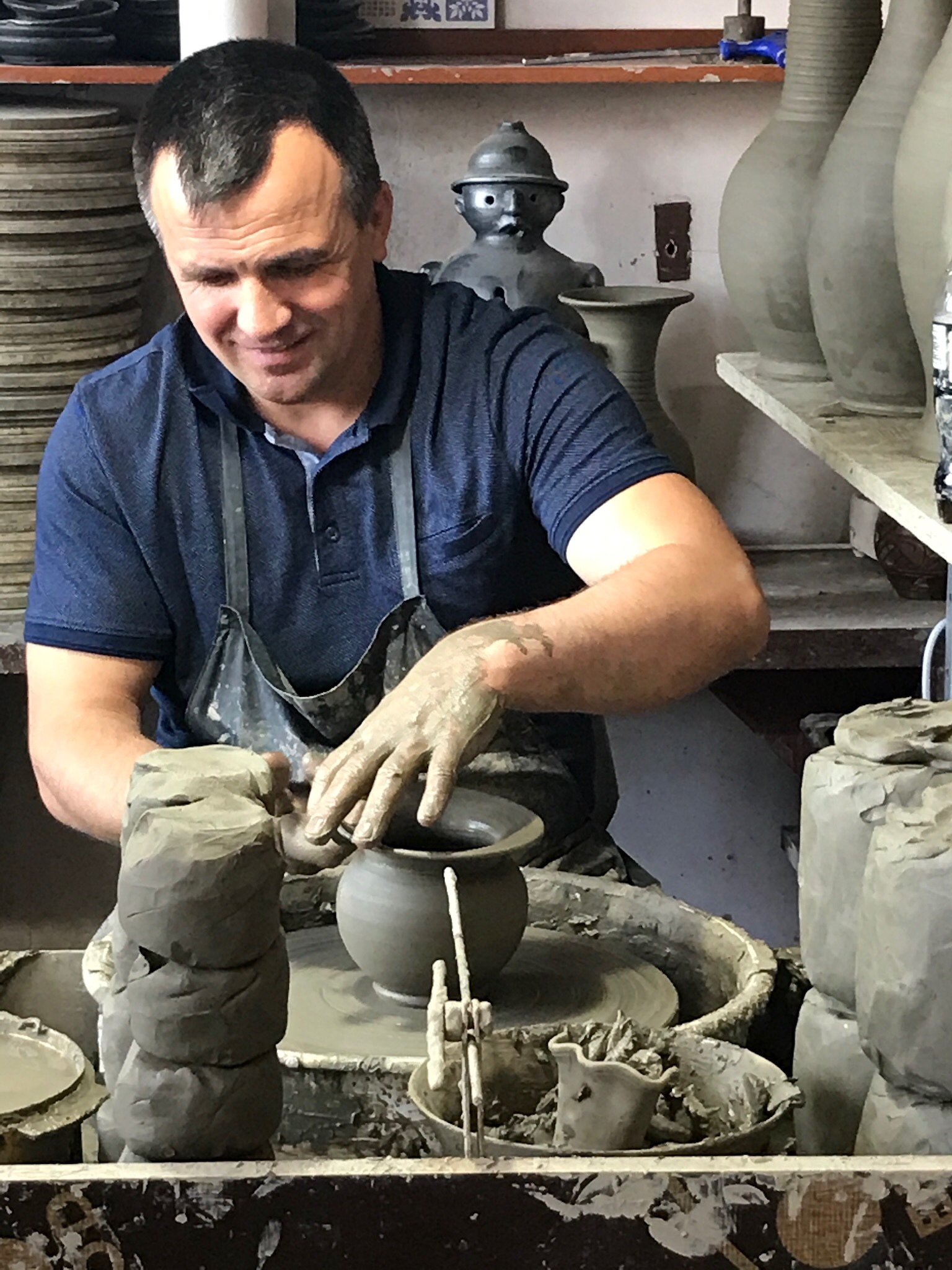 Years ago, while making traditional pottery, a man accidentally discovered a way to create a new style of ceramic. From this lucky discovery came a whole new style of Romanian pottery. Marginea Black Pottery is shaped by hand, fired and then polished by hand. The black/steel gray color of the pottery is due to a closely guarded secret in the firing process. We watched a man create a pot in perhaps one minute. It will then be dried out in the sun before going through the firing process.

Black Pottery is unique to Marginea. The black color is obtained without adding anything to the clay paste, but is obtained after ten hours in a coal furnace. Traditionally, the pottery is burned in large cone-shaped pits. When the pottery becomes red, it is covered with a layer of wet clay, then the baking continues without oxygen, the vessels becoming gray or black. Polishing with river stones completes the process. 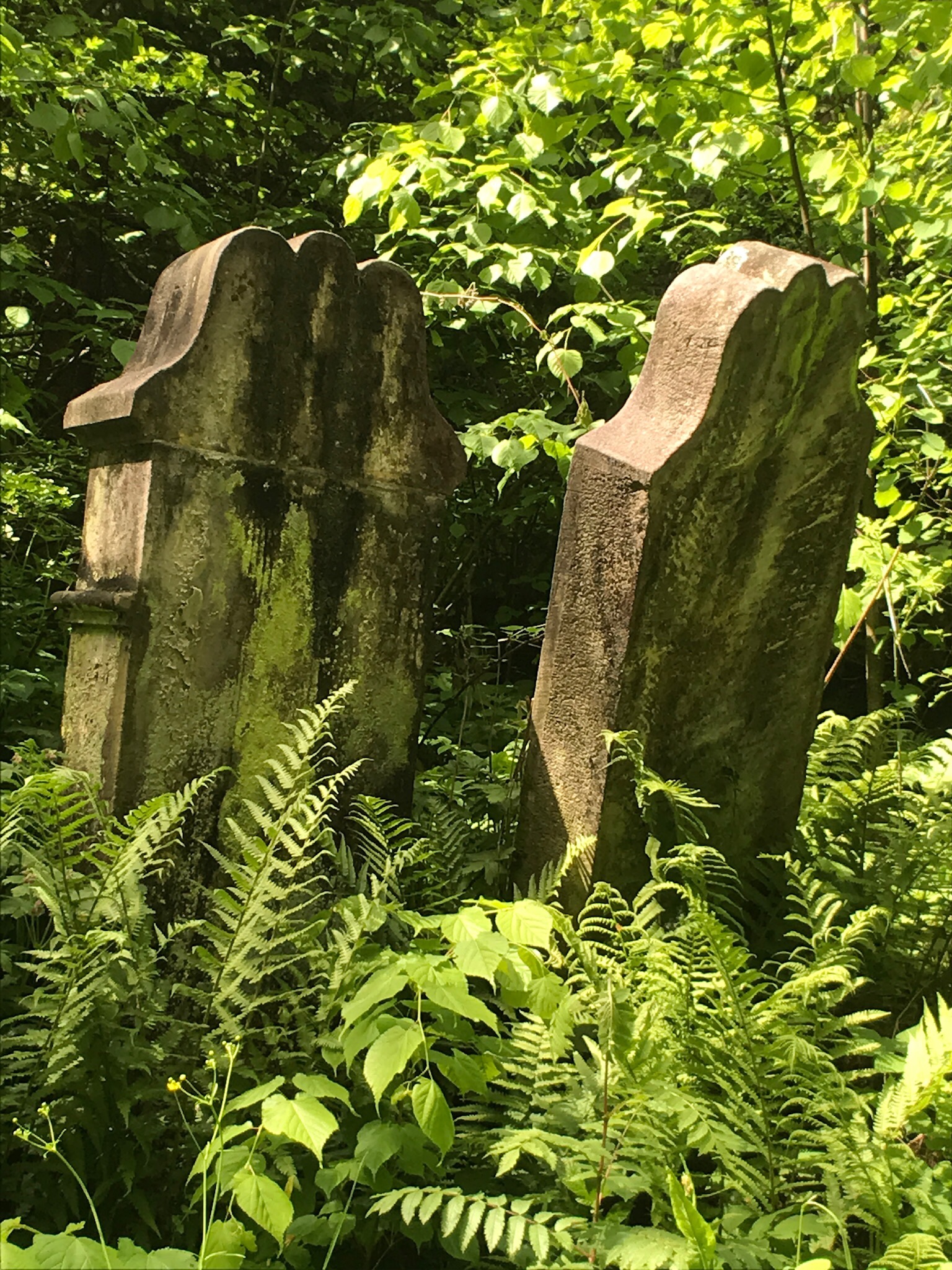 A nonexistent path through weeds and stinging nettles took us to an abandoned Jewish Cemetery. Its first burial was in 1789, the last around 1979. (The oldest Jewish cemetery dates in the 1500s.) Wars and the Ceaușescu government pretty much decimated the Jewish population in Romania, others left after 1989 when the borders opened. The tombstones and cemetery are neglected, nature is taking over. Hopefully, someone will take on the task of saving this part of Bucovina history.

I am told this is the poorest region of Romania. No way! Lush, green, pastoral, a plethora of food and culture, this historical region of Bucovina is rich in every way.